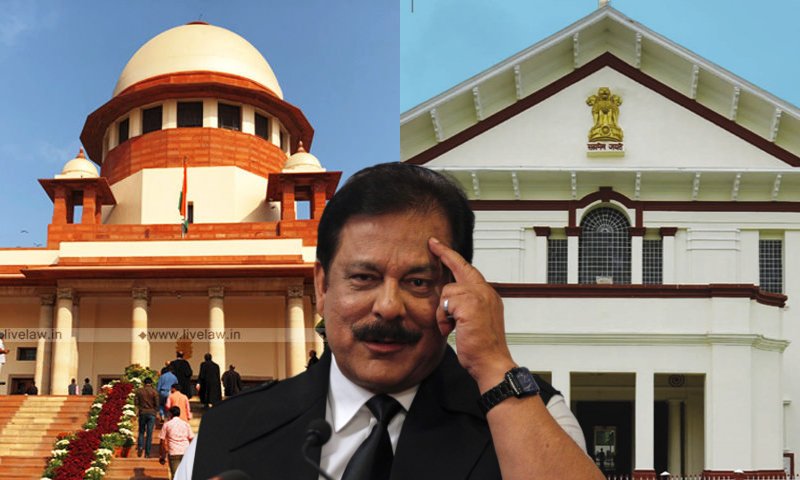 The Supreme Court on Friday stayed the direction of the Patna High Court, also of Friday, by which the Bihar DGP was required to produce Sahara India Group Head Subrata Roy in the Court on May 16.

The bench of Justices A. M. Khanwilkar and J. B. Pardiwala was hearing Roy's SLP against the February 11 judgment of the High Court and the subsequent order of April 27. On February 11, the High Court had observed that some Interlocutory Applications have been filed by some intervenors that their money is lying with Sahara Credit Cooperative Societies Limited and other companies of the Sahara Group and they have not been returning the amount to the investors.
"It has been contended by the intervenors that when they approached for their maturity amount then they are being forced to reinvest the said matured amount in some other companies of the Sahara Group. This action of Sahara to force investors to invest their hard-earned money in different schemes in which they are not interested is nothing but extortion and this cannot be permitted. Office is directed to add Sahara Credit Cooperative Societies Limited and Sri Subrata Roy Sahara, who is the Director of Sahara Group of Companies as opposite parties to the bail petition i.e. Criminal Miscellaneous No.8063 of 2021", the High Court Court had then directed. This impugned judgment was also stayed by the Supreme Court on Friday.
It may be noted that by its April 27 order, the High Court directed that "by way of last chance, the Sahara Group and other companies, who have been taking deposits till about one month back, are directed to come with a plan for return of the investment of the investors, and for that, Sri Subrata Roy, is directed to appear personally in this Court on 11.05.2022". This order was issued in 3 anticipatory bail applications after the Court came across certain cases of cheating committed by Non-Banking Financial Companies.
On Friday, Senior Advocate Kapil Sibal, for Roy, told the bench of Justices A. M. Khanwilkar and J. B. Pardiwala that certain investors had moved the High Court alleging that the Sahara companies were not returning their money and that the impugned order was passed by the High Court in anticipatory bail pleas unrelated to Roy.
On Friday, the bench passed the following order- "Issue notice. There shall be stay of the impugned judgment and order. We are informed that pursuant to the impugned order, the High Court passed a further order today...the operation of that direction is also stayed..."
Coming down heavily on Sahara India Group Head Subrato Roy as he failed to remain present before it, pursuant to its direction in that regard, the Patna High Court today directed Bihar DGP to produce him in the Court on May 16, 2022 (Monday).

The High Court last month directed Roy to remain personally present before the Court on May 11 and to come up with a plan for the return of the investment of the investors. This order was issued in 3 anticipatory bail applications after it came across certain cases of cheating committed by Non-Banking Financial Companies.

Before the Court, Roy's Counsel made submissions for his exemption from his personal appearance on medical grounds, however, his prayer was rejected today for the third time. This prayer for exemption of Mr. Subrata Roy Sahara was earlier rejected twice on 06.05.2022 and 12.05.2022.

The counsel also produced certificates granted in his favour by the Kokilaben Dhirubhai Ambani Hospital and Medical Research Institute dated 3rd of May, 2022, however, it did not mention the date of surgery.

Further, rejecting his application, the Court noted that it was never the intention of the Court to coerce the petitioner to appear in this Court and rather, the intention was and is the refund of the hard-earned money of the general public at large particularly of the State of Bihar.

It came to the Court's knowledge that a large number of complaints are pending before the authorities under the Bihar Protection of Interest of Depositors (in Financial Establishments) Act, 2002 against the Sahara group of companies.

A common complaint raised by the investors is that whenever they approach the local offices of Sahara Group for payment of the maturity amount on their investments in different schemes then they are forced to transfer their investment to a new scheme, if it may be by reinvestment or by the issuance of some kind bonds etc.