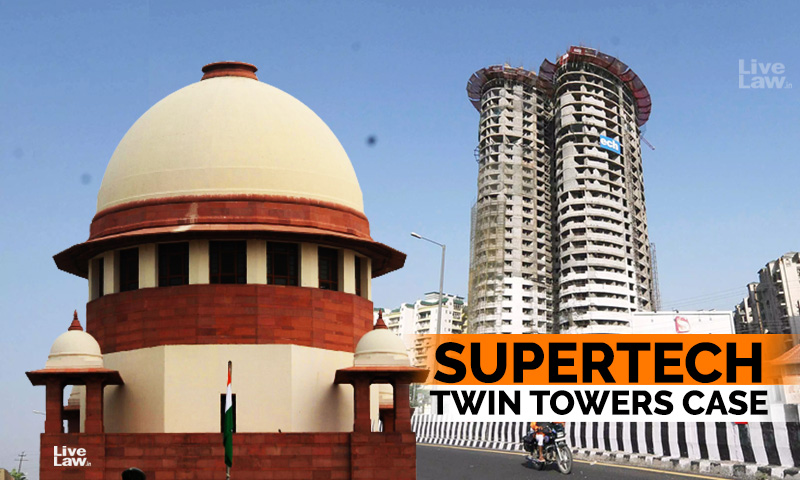 After the Supreme Court warned its directors of jail for contempt last week, real estate giant Supertech informed on Monday that they worked out the amount payable to the contempt petitioners and forwarded the cheques for the same to the Amicus Curiae on Saturday itself.It was further told that if they receive the particulars of bank accounts of the home-buyers, they will make RTGS remittances...

After the Supreme Court warned its directors of jail for contempt last week, real estate giant Supertech informed on Monday that they worked out the amount payable to the contempt petitioners and forwarded the cheques for the same to the Amicus Curiae on Saturday itself.

It was further told that if they receive the particulars of bank accounts of the home-buyers, they will make RTGS remittances of the admitted amounts on Janaury 18, and that such reimbursement would be without prejudice to the rights and contentions of the home-buyers in the contempt proceedings.
The bench headed by Justices D. Y. Chandrachud was hearing contempt pleas by the home-buyers, alleging that while, on the one hand, Supertech invited them to collect their money, on the other, when they approached the company, they were told that the money would be paid back in installments together with certain deductions which were not indicated by the Court.
"We worked out the amount payable and forwarded the cheques, along with the calculations, to the Amicus on Saturday for each of the home-buyers in the contempt petitions. The Amicus said that there is some difference between our calculations and the calculations of the flat-buyers and the amicus...If they give us particulars of bank accounts of the flat-buyers, we will make RTGS remittances tomorrow only", advanced the advocate appearing for Supertech.
The Bench of Justices Chandrachud and Surya Kant proceeded to record in its order- "The admitted amounts which are due and payable according to Supertech may be encashed by the flat buyers without prejudice to the rights and contentions in the contempt proceedings. They may provide their RTGS details so as to facilitate electronic transfer of funds"
The Noida authority also informed the Court on Monday that one Edifice Engineering has been chosen to carry out the demolition of the two 40-storeyed towers of Supertech Emerald Court. The court has directed Supertech to execute within 1 week the contract with the company to demolish its towers.
The Supreme Court on last Wednesday had pulled up real-estate giant Supertech for failure to reimburse home-buyers of flats in the 40-storey twin towers in Noida, the demolition of which was directed by the Court in August last year.
"We will send your directors to jail now! They are playing truant with the Supreme Court!...Interest cannot be charged on ROI! You are looking for all sorts of reasons to not comply with the order of the court. Ensure that the payments are made by Monday, else there would be consequences!", Justice Chandrachud told the Advocate appearing for Supertech.
The Court also asked Noida Authority to finalise the agency to be entrusted with the task of demolition of the twin towers in the Noida Emerald Court housing project. It directed the authority to respond on January 17.
The Supreme Court had on August 31, 2021 upheld an order passed by the Allahabad High Court directing the demolition of twin 40 storey towers in the Emerald Court project of Supertech Ltd in Noida for violation of building norms.
The court had directed that the work of demolition should be carried out by the appellant Supertech within a period of three months at its own cost under the supervision of NOIDA officials. The demolition shall be overlooked by the Central Building Research Institute(CBRI) to ensure safe demolition.

The work of demolition shall be carried out under the overall supervision of CBRI. In the event that CBRI expresses its inability to do so, another expert agency shall be nominated by NOIDA. The cost of demolition and all incidental expenses including the fees payable to the experts shall be borne by the appellant(Supertech).

Supertech should within a period of two months refund to all existing flat purchasers in Apex and Ceyane (T-16 and T -17), other than those to whom refunds have already been made, all the amounts invested for the allotted flats together with interest at the rate of twelve per cent per annum payable with effect from the date of the respective deposits until the date of refund in terms of the judgment.

The Court also directed the builder to pay a cost of Rupees 2 crores to the Resident Welfare Association.

The bench of Justices DY Chandrachud and MR Shah observed that there was collusion between NOIDA officers and the builders in facilitating the construction in violation of norms and the complicity of the NOIDA authorities was "writ large" in the present case.

"The record of the case is replete with instances which shows collusion of Noida authority with the builder...Collusion is writ large in the case. High Court has correctly observed this collusion aspect", Justice Chandrachud read out the excerpts from the judgment.

"Illegal construction has to be dealt with strictly", the bench observed in the judgment. The judgment also has observations regarding the need to preserve environment amid the rising needs for urban housing.

"The protection of environment and well being of the people who occupy this has to be balanced with the need of increasing demand for urban housing", the bench stated.

The Supreme Court observed that the consent of the individual flat owners was necessary under the UP Apartment Act before the twin towers was constructed as the common area was reduced by adding new flats. However, with the collusion of authorities, the construction of twin towers was done illegally.

"The illegal construction of T-16 and T-17 has been achieved through acts of collusion between the officers of NOIDA and the appellant and its management", the Court said. Full copy of the judgment is awaited.

The Supreme Court also confirmed the High Court's direction to the competent authority under to grant sanction to prosecute the NOIDA officials who acted in collusion.

On October 4, 2021, The Supreme Court dismissed a Miscellaneous Application at the instance of Supertech seeking modification of the August 31 judgment of the court by which it upheld an order passed by the Allahabad High Court directing the demolition of twin 40 storey towers in the Emerald Court project of Supertech Ltd. in Noida for violation of building norms.