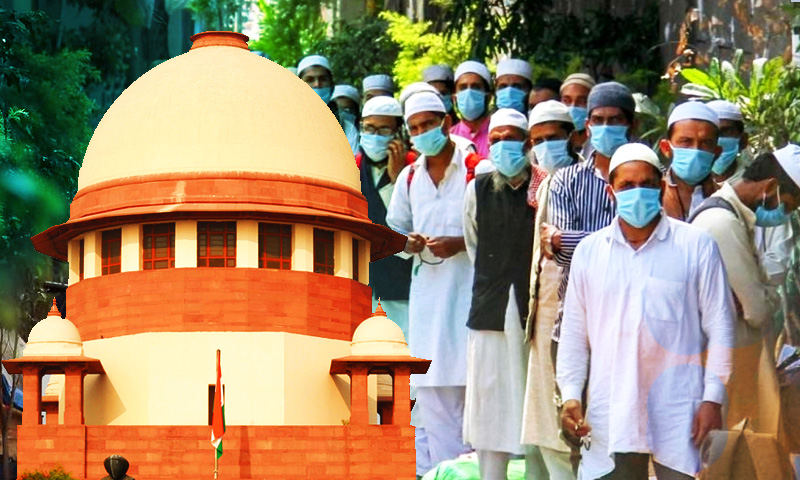 As regards the blacklisting of almost 3500 persons in connection with the Tablighi Jamaat congregation, SG Tushar Mehta on Thursday told the Supreme Court that since 2003, Tablighi activities are prohibited in India, that the petitioners came on a tourist Visa and were found to be indulging in Tablighi activities and therefore, they are blacklisted.

He submitted that it is the plenary power of the Executive to disallow one's continued presence in the country or to refuse entry, and that Article 14 and principles of administrative law, reasoned order, hearing are not applicable in cases of visa violations; that a person who entered the country on a tourist Visa or a particular type of visa and who the country believes has engaged in some other activities may not approach a judicial forum in that country.

The SG prayed that the bench consider the principle, without looking at the facts of the instant case. He urged that there may be a myriad of situations- he gave the example of a person who enters the country as a tourist but is suspected to be a spy. "The nation has the power that henceforth we will not permit you", he submitted.

The bench of Justices A. M. Khanwilkar, A. S. Oka and C. T. Ravikumar asked if this power can be exercised unilaterally. On the SG's request, the bench adjourned the hearing to Wednesday to enable the SG to place on record the relevant statutory provisions, the judgments and written submissions to develop the stand.

SG: "This may need hearing. I have examined it. Here, the decision was taken on individual basis and not en masse. Since 2003, Tablighi activities are prohibited in India. They came on a tourist Visa and they were found to be doing Tablighi activities and therefore they are blacklisted. They would never get visa. We received information that there are certain spies who may enter India. Visa is a privilege which one country grants to a foreigner. There is no article 14, there is no article 19- the only thing is that if you are getting visa and if you are in India, then Article 21 rights are the only rights which are available to you. Principles like administrative law, reasoned order, hearing are not applicable in case of visa violations. That is the law. There are some judgments and statutory provisions which I wish to show to your lordships- this being the plenary power of the Executive, permitting somebody's entry and not continuing his presence."

Justice Khanwilkar: "Yes, Visa is a privilege. You don't get it as a matter of right. But the issue is that no prior notice was given and the visa was cancelled unilaterally. That is the only issue which arises at present. That they can convince the authorities that we were not part of the blacklisting activities. On that, if there is a settled position that no notice is required, then it is a different matter. There are two situations- If they come as a group and you cancel the visa of all those persons who came as a group, that is atleast understandable that no individual notice is given, notice is given only to the leader of the group and action is taken. But if they came individually at separate points of time and from separate areas also, you need to give opportunity on a case to case basis?"

SG: "Your Lordships may have a different view after going through our submissions"

Justice Khanwilkar: "But the person must have the opportunity to show, 'I was not part of that activity, you get that impression from where'..."

SG: "For the time being, for your lordships to decide the principle, your lordships may ignore Tablighi activities. They came from different parts, settled at one particular part, from 2003 onwards this activity itself is banned..."

Justice Khanwilkar: "Can you blacklist without giving notice? Show us the judgment on that?"

SG: "There is no direct judgment on that. I will have to develop that point"

Justice Khanwilkar: "It seems to be doubtful proposition"

SG: "(The opposite side) may laugh it out. But as a nation, it is a serious proposition. As a principle, if you enter and if you commit something like this..."

Justice Khanwilkar: "That, you are absolutely right. Somebody wanting to come for spying, if you have information that his purpose of visit to India is as a spy, you may refuse visa. But once you have given visa, he enters and then you unilaterally blacklist. Is he not entitled to an opportunity that at least give me a chance to explain? That is the only thing which requires examination. We are not on cancellation for the time being. But blacklisting is..."

SG: "Blacklisting means that for 10 years you cannot enter my country. That the country has decided. That is the meaning of the plenary power"

Justice Khanwilkar: "You have given him visa, but without notice to him, you have cancelled it and now blacklisted..."

SG: "Visa is a permission to enter a particular country of which you are not a citizen. If I go to US embassy or any other embassy, they may say on the basis of purely subjective satisfaction that you may not come back to our State, that 'we refuse visa, no reasons needed'"

Justice Khanwilkar: "Not giving visa is okay. But giving visa and then cancelling it and then blacklisting him is the difficulty. He is not even entitled to apply for reconsideration for grant of visa"

SG: "It is a privilege which any country confers..."

Justice Khanwilkar: "That can be done unilaterally?"

SG: "As a principle, your lordships may decide this issue. But on the facts of this case, it may not be correct assistance on our part. There can be a myriad of situations..."

Justice Khanwilkar: "Has any High Court dealt with the situation?"

SG: "There were criminal cases filed for violation of Covid guidelines, there were directions issued by the government for no congregation etc, violation of section 188, IPC etc. There were judgments in those cases"

SG: "Most of them have plea-bargain"

Justice Khanwilkar: "On the principle, without looking at the activity or the facts, we want to understand that visa is issued, person goes back to his own country and then you unilaterally blacklist him?"

SG: "I will satisfy. It is an important question for the country"

Justice Khanwilkar: "It has consequence in the sense that the person is prevented from applying for visa in the future without knowing the reason. You say no reason is required for grant of visa, refusal of visa?"

SG: "Blacklisting only means that the name is put in a place that as and when they apply for visa, visa would be denied. Blacklisting is not in the contractual or commercial sense where you have article 14, article 19(1)(g) rights etc. Therefore no fundamental rights to get a visa

A person has entered a country on a tourist Visa or a particular type of visa and the country believes he has done something else, can you approach a judicial forum in that country? Will that right be enforceable? That is why I was hesitant in opening this issue in the facts of this case. Take the example of a person who enters the country as a tourist but is suspected to be a spy. The nation has the power that henceforth we will not permit you..."

Mr. Khurshid: "Much of this we will agree with. How can we support someone who is against the country's interest. We are only on that when somebody is here, what is the procedure to be applied to him, he may be a heinous person, we may get rid of him and never allow him to come back. The only issue is that you cannot imagine things and say that you are a bad looking person and so you go, I am blacklisting you. And Without giving have a chance to explain?"

SG: "The fact is that you were found in a common congregation, where congregation was forbidden by Indian laws, and thereafter you chose to spread. That is how Tablighi activities spread. They were found to be members of the Tablighi Jamaat"

Justice Khanwilkar: "All those who were prosecuted, you have blacklisted all those persons?"

At this, SG Tushar Mehta had prayed that the bench may not make any observations as of now as anything that is to fall from the Court would have wide ramifications. Stating that he cannot respond to the Court's suggestions immediately, the SG had sought for time.
He had urged, "Whenever a foreigner comes, the question as to whether visa is granted, not granted, curtailed, is an Executive decision". The SG had pressed, "This is not a case of few individuals. This would be a case which will govern all illegal foreigners whose visa is affected by some Executive order. Your Lordships' one word, if Your Lordships say 'serve it (the blacklisting order) and thereafter they can challenge' will also have ramifications. Let me find a solution so that your lordships are not required to go into legal issues and the problem is also resolved, and as a nation, our country does not suffer any ramifications which are not intended"
The Supreme Court on April 27 was told by ASG K. M. Nataraj that the concerned authority is still working on the resolution for which another one week's time is required.

The Supreme Court had in January agreed to consider the question related to the rights of foreigners with regards to visa restrictions.

SG Tushar Mehta had submitted before the bench that in the petition by foreign nationals challenging the Ministry of Home Affairs order blacklisting them for alleged participation in Tablighi Jamaat activities, an important question related to the right of foreigners with regards to visa restriction had arisen.

Mr Mehta further submitted that there were judgments that say that these rights are sovereign statutory rights.

Acceding to SG's request, the bench in its order said, "As regards the main matter, a short question is involved which needs to be addressed expeditiously. We direct listing of the main matter in the 2nd week of March, 2022."