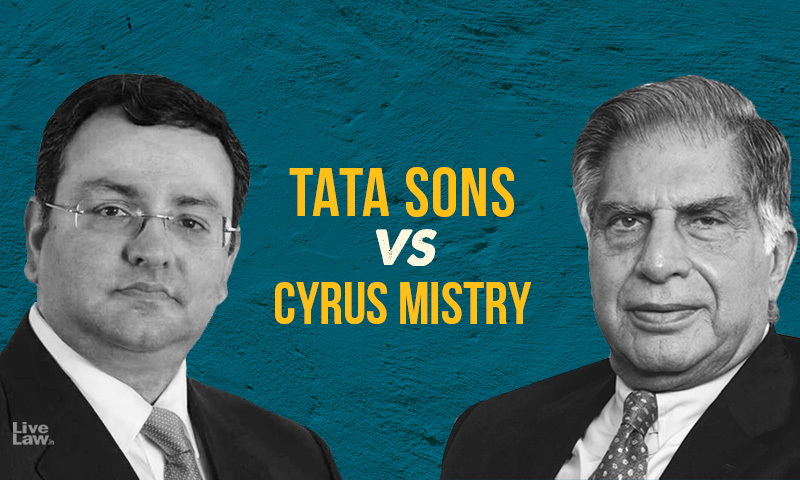 In a big win for Tata Sons Ltd, the Supreme Court on Friday allowed its appeal against the order of the National Company Law Tribunal, which had ordered to reinstate the ousted Chairman Cyrus Mistry.The Court allowed the appeal of Tata Sons, answering all questions of law framed in the case in its favour, and set aside the NCLAT order. The appeals filed by Shapoorji Pallonji group and...

In a big win for Tata Sons Ltd, the Supreme Court on Friday allowed its appeal against the order of the National Company Law Tribunal, which had ordered to reinstate the ousted Chairman Cyrus Mistry.

The Court allowed the appeal of Tata Sons, answering all questions of law framed in the case in its favour, and set aside the NCLAT order. The appeals filed by Shapoorji Pallonji group and Cyrus Mistry were dismissed.

The Top Court held that the actions of Tata Sons board against Mistry did not amount to oppression of minority shareholders or mismanagement. The bench also said that it was open for Tatas and Mistry to work out their separation terms.

The reasoning of the bench will be know when the full copy of the judgment is released.

A 3- judge bench comprising of Chief Justice of India SA Bobde, Justice AS Bopanna and Justice V Ramasubramanian pronounced the judgment. It was on December 17 last year that the bench reserved judgment in the case after hearing a battery of Senior Advocates including Harish Salve, Shyam Divan, CA Sundaram, Dr AM Singhvi, Janak Dwarakadas, Mohan Parasaran etc.

The NCLAT, in its order passed on December 18, 2019,  had quashed the decision taken by the Board of Tata Sons in October 2016 to remove Mistry as the Chairman and had directed to restore Mistry.

The present legal battle has its genesis in the company petitions filed by Shapoorji Pallonji Group under Sections 241 and 242 of the Companies Act 2013 alleging oppression and mismanagement in Tata Sons. These petitions were filed in the wake of Mistry's removal. The NCLT Mumbai bench dismissed the petitions, against which appeals were filed in NCLAT.

The said NCLAT order was stayed by the Apex Court in January 2020 whereas the judgment was reserved on 17th December 2020.

The Supreme Court framed the following questions of law :

(i)Whether the formation of opinion by the Appellate Tribunal that the company's affairs have been or are being conducted in a manner prejudicial and oppressive to some members and that the facts otherwise justify the winding up of the company on just and equitable ground,is in tune with the well settled principles and parameters,especially in the light of the fact that the findings of NCLT on facts were not individually and specifically overturned by the Appellate Tribunal ?

(ii)Whether the reliefs granted and the directions issued by the Appellate Tribunal, including the reinstatement of CPM into the Board of Tata Sons and other Tata companies, are in consonance with the pleadings made, the reliefs sought and the powers available under Sub­section (2) of Section 242(Companies Act 2013) ?

(iii)Whether the Appellate Tribunal could have, in law,muted the power of the Company under Article 75 of the Articles of Association, to demand any member to transfer his ordinary shares, by simply injuncting the company from exercising such a right without setting aside the Article ?

iv)Whether the characterisation by the Tribunal, of the affirmative voting rights available under Article 121 to the Directors nominated by the Trusts in terms of Article104B, as oppressive and prejudicial, is justified especially after the challenge to these Articles have been given up expressly and whether the Tribunal could have granted a direction to RNT and the Nominee Directors virtually nullifying the effect of these Articles ?

All questions of law were answered in favour of the Tata Group.

Calling the NCLAT direction to reinstate Cyrus Mistry as Chairman to undermine the principles of corporate democracy, it was the case of Tata Sons group that NCLAT lacked jurisdiction for such restoration especially when such a relief was not sought. According to Tata Sons, NCLAT lacked jurisdiction to declare it as a "Public Company" when it is a "Private Company" under sec. 2(68) of the Companies Act 2013.

During the course of hearing in the matter, it was submitted by Harish Salve that "It has always been a private company. The curious thing which has happened in the case is that there is a provision in Tata Son's Articles which restricts the transfer of shares. It also has a remarkable feature that the Board could direct a shareholder to sell shares. The NCLAT overlooked the fact that the primary contract between the shareholders and the company is the Articles of Association".

Furthermore, Tata Sons in its appeal submitted that NCLAT's direction to Tata Sons for consulting Shapoorji Pallonji Group for appointments of Executive Chairman and Directors in future was contrary to the Articles of Association.

"Pallonji Mistry, Cyrus Mistry's father was included in Tata Sons as non-executive Director in 1980. Cyrus Mistry joined Tata Sons in 2006. Mistry's appointment as Executive Chairman would have ended in March 2017. It was not a life long appointment. He was removed in October 2016. After March 2017, he had no right to seek re-appointment. Corporate democracies must have its places. " Salve submitted in the Court.

Coming to the aspect of legal tests under sec. 241 and 242 of the Companies Act, it was the case of Tata Sons that the NCLAT failed to explain how the actions of the Board constituted any prejudice and oppression. It was also their case that orders under sec. 242 of the Act can be passed only if there are facts which show that the winding up of the company is otherwise necessary which was not discussed by the NCLAT.

"The power under sections 241 and 242 is available as the alternative power, only in case the court concludes that it is otherwise just and equitable that the company be wound up. The English courts developed it as an equitable relief and we incorporated it as a statutory relief. Say, in case of a deadlock, where two directors are not speaking to each other. In such cases, it may be just and equitable to wind up the company but if it would cause unnecessary prejudice to the shareholders or to the company, the tribunal would instead grant relief of oppression." Salve argued in the Court.

Shyam Divan appearing for Mistry submitted during the course of hearings that the essence of the legal battle rests on the concept of corporate governance and how law has evolved from corporate majority to corporate democracy to a higher set of values and a higher standard ensuring transparency. According to Divan, the process of removal of Cyrus Mistry went against the concept of Corporate Democracy. In view of this, he called the removal procedure as prescribed under the AoA as an "express black letter provision".

According to his arguments, Mr. Ratan Tata exercised an overriding authority on the decisions of the Board of Directors. He informed the Court that the communications between the year 2013 to 2016 show that there was a complete confusion in the Board. All the decisions were taken by Ratan Tata himself.

"On 28th June 2016, the Board didn't have any grievance from Cyrus Mistry. The board noted that Mistry in fact worked in the welfare of the company and the Board applauded his contribution. There is no agenda of removal of his termination. No reasons for removal of Mistry were recorded. One of the directors was a nominee of Tata Trust. Other 2 were appointed as personal nomination by Ratan Tata. Other 2 who voted for his removal had just 4 months prior to the removal praised his work. No reason was given by them on their vote." He argued.

Furthermore it was submitted that "Mr. Ratan Tata is not the member of the board on 18 Dec 2012. He didn't attend any meeting until 2016 October. He is not subject to the discipline of sec. 166 of Companies Act. Mr. Subedar, company secretary informed the board that while the meeting was in process, Ratan Tata sent 2 letters while in the position of shareholder requesting other Directors namely Shrinivasan and Piramal to take necessary actions. Mr. Cyrus Mistry was the Executive Chairman on this date."

It was Mr. Divan's argument that it was agreed in the meeting that Mr. Mistry must be removed from the post of Executive Chairman as the trust lost confidence in him due to some reason. "While there were different agendas for the meeting to be convened, the voting was done on agendas over which no prior information was given to anyone. Article 105A and Article 118 requires that before the removal of a Chairperson, removal has to be considered by a selection committee and a notice of removal as to be furnished. These conditions were not fulfilled in this case. This is violation of AoA." he argued.

According to Mr. Divan, on 1 August 2012, a resolution was passed by General Body appointing Mr. Mistry as Executive Chairman. He suggested that if one wants to go against the appointment of chairperson, the appropriate way is to approach the General Body which is supported by requirement of Article 105. He also suggested that no prior information or notice was accorded to Mr. Mistry on his removal which goes against the statutory requirement of both AoA and Companies Act, 2013.