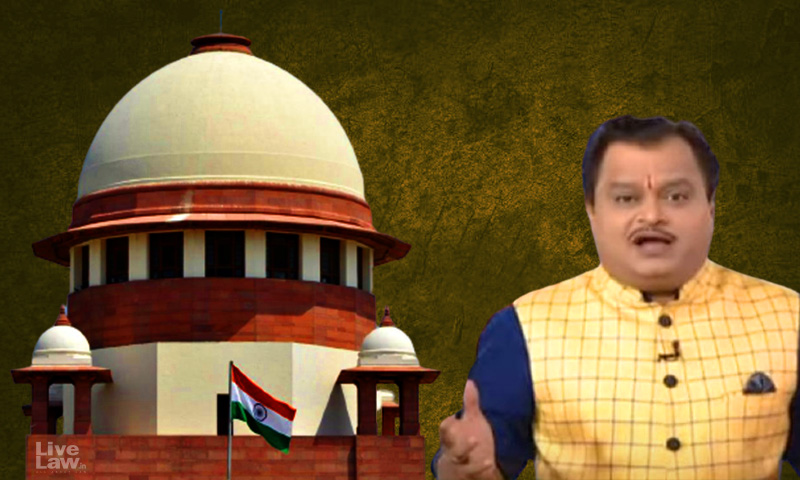 A Supreme Court bench headed by Justice DY Chandrachud will hear today, the petitions against Sudarshan News TV's "Bindaas Bol (UPSC Jihad)" show which is allegedly propagating communal hatred about the entry of Muslims into All India Civil Services.The Ministry of Information and Broadcasting has permitted Sudarshan News to telecast the remaining four episodes of its...

A Supreme Court bench headed by Justice DY Chandrachud will hear today, the petitions against Sudarshan News TV's  "Bindaas Bol (UPSC Jihad)" show which is allegedly propagating communal hatred about the entry of Muslims into All India Civil Services.

The Ministry of Information and Broadcasting has permitted Sudarshan News to telecast the remaining four episodes of its contentious"Bindaas Bol – UPSC Jihad" programme, which proclaimed that Muslims were infiltrating the Civil Services, subject to suitable modifications and moderations so as to not violate the Programme Code in the future.

"…after examining all facts and circumstances of the case and balancing the fundamental rights of the broadcaster, hereby "CAUTIONS" Sudarshan TV Channel Ltd. to be careful in the future. It is further directed that if any violation of the Programme Code is found in future, stricter penal action would be taken".

The warning to the TV channel was rendered in the Affidavit filed in compliance of the 23rd September order of the Supreme Court wherein it was noted that as the Centre had issued show cause notice to Sudarshan News TV, the same would be dealt with in accordance with law and that a report would be submitted to the Court indicating the outcome.  Accordingly, the report of the Centre had culminated in an Order dated 4th November which has duly recorded the contentions of the Respondent, that is, Sudarshan TV Channel Ltd. that, inter alia, the Programme Code was not violated and that they were merely "exercising the right to express their views and that the form of and manner of expression cannot be reviewed by the Government".

Taking note of these submissions, the Centre arrived at the conclusion that every private TV channel, including Sudarshan News TV, which has been granted permission by the Central Government under the Uplinking and Downlinking Guidelines, 2011, is bound by the Programme and Advertising Codes laid down under the Cable Television Networks (Regulation) Act, 1995.

It further noted that the manner in which the channel had gone about its exposition to portray the infiltration of a particular community in the Civil Services, were not in "good taste" and "portrays one community and UPSC in poor light".

"…the Ministry is of the opinion that while freedom of speech of expression is a Fundamental Right, the tone and tenor of the episodes telecast do indicate that the channel has through utterances and audio-visual content breached the Programme Code. The Ministry finds that they are not in good taste, offensive and has likelihood of promoting communal attitudes".

Consequently, the channel has been cautioned not to repeat the same in the future as doing so would invite "stricter penal action". Therefore, the remaining four episodes of the programme can be telecast after reviewing of the same to ensure that there is no violation of the Programme Code.

The Order of the Ministry will be subject to the outcome of the judgement of the Supreme Court.