"We Have Lost All Faith In Tihar Jail Authorities! They Are Sitting in Capital City & Defeating Our Orders, Absolutely Shameless": Supreme Court In Unitech Case 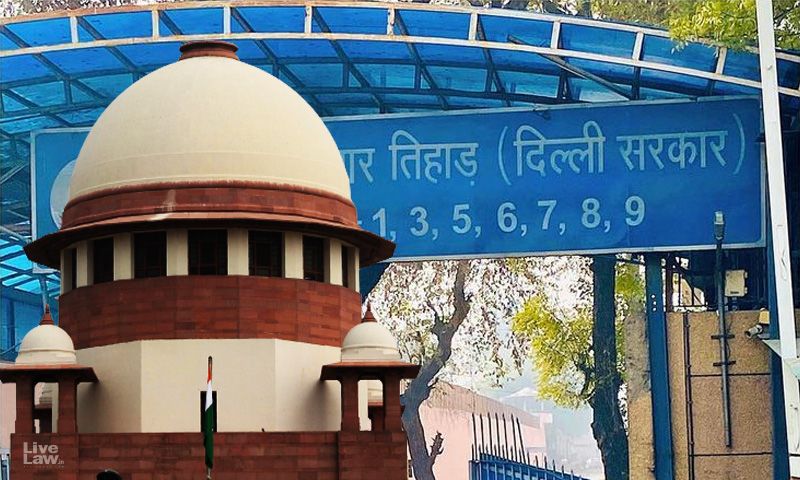 "We have lost all faith in the Tihar Jail authorities! They are sitting in the capital city and defeating the order of the Supreme Court! Absolutely shameless on the part of the Superintendent of the Tihar jail!", expressed Justice D. Y. Chandrachud on Thursday in connection with the Unitech matter.

The bench of Justices Chandrachud and M. R. Shah pulled up the Tihar Jail authorities for acting in connivance with Ajay Chandra and Sanjay Chandra, the erstwhile promoters of Unitech Ltd., in engaging in illegal activities by flouting the jail manual, dissipating proceedings, derailing investigation etc. The bench made these comments in pursuance of the revelations made by ASG Madhavi Diwan, for the ED, on how the Chandra brothers are operating from Jail- that the ED has found a secret underground office of theirs in South Delhi, that hundreds of original property sale deeds, digital signatures and computers with sensitive information have been seized from the secret office, and that they deputed staff outside the Tihar jail premises to communicate with outside world and dispose off properties. It has also been alleged that they even tried to influence from jail a dummy director interrogated by the agency.

"The Tihar Jail authorities have acted absolutely in connivance with them! The jail has virtually become a haven for carrying out unlawful activities and for defeating the order of the Supreme Court! We have lost faith in the Tihar jail authorities! They are sitting in the capital city and enforcing the orders of the Supreme Court and all this is happening under their nose?! Absolutely shameless of the Superintendent of the Tihar Jail, is all we want to say! We are proposing to pass an order today shifting Ajay and Sanjay Chandra elsewhere!", observed Justice Chandrachud.

"Once we have revoked your facilities, you are only entitled to as much as the other undertrials! Clearly, some people are more equal than others! This is defeating the jurisdiction of our Court and the investigation by the ED!", commented the judge to Senior Advocate Vikas Singh, for the accused.

The bench, in its order of Thursday, recorded that in the order of this court dated May 9, 2019, there is a categorical reference to the status report which was filed by the forensic auditor from which it emerged that they had not been provided with the access to all electronic records, including those which were in possession of the Chief Financial Officer of Unitech. Consequently, the lack of cooperation was underscored in that order of this court.

"In this backdrop, the court specifically recalled the facilities that had been made available to the accused Sanjay Chandra and Ajay Chandra, former directors of Unitech Ltd who were lodged in Tihar Jail. The court directed that they shall not be entitled to any additional facilities apart from those which are available in the normal course in terms of the jail manual. These directions were communicated by the Registrar (Judicial) to the Jail Superintendent of the Tihar Central Jail", noted the bench.

The bench further observed that during the course of the proceedings, the Directorate of Enforcement has filed two status reports dated April 5, 2021 and August 16, 2021. The status reports indicate the progress which has been made in the course of the investigation. "The status report dated August 16, 2021 contains a copy of the letter addressed on August 16, 2021 by the Assistant Director, HIU, ED to the Commissioner of Police. The letter contains specific details of the manner in which the premises of Tihar Central Jail have been used- (1) in engaging in illegal activities by flouting the jail manual; (2) making efforts to dissipate the proceedings; (3) influencing witnesses and attempting to derail the investigation", said the bench.

The bench on Thursday shifted the Chandra brothers to Arthur Road Jail, Mumbai and Taloja Jail, to be housed separately-

"We are of the view that the record thus far indicates that despite the orders of this court, activities are taking place within the precincts of the Tihar Central Jail where the 2 accused have been lodged which has the propensity to undermine the authority of the court as also to derail the investigation which has been ordered by the Enforcement Directorate, including but not confined to the PMLA. In the circumstances, we order and direct that the accused be shifted immediately from Tihar Central Jail to the premises of Arthur Road Jail, Mumbai and to the Taloja Central Jail, to be housed separately. A copy of this communication shall be forwarded by the Registrar Judicial to the DGP, Maharashtra so that arrangements can be made immediately for housing the 2 accused."

'It was Commissioner's duty as head of department to inquire into allegations! He should not have waited even a single day!"

The court also asked why the Commissioner, Delhi Police has not taken any action for 10 days despite the communication by the ED to him making certain allegations against the jail staff. The bench directed the Commissioner to personally carry out an inquiry into the same and submit a report within 4 weeks.

"What is happening in Tihar Jail?", Justice Chandrachud put to ASG K. M. Nataraj, for the Delhi Police.

"The contents of the letter (addressed by the ED to the Commissioner) are serious! We will hold an inquiry and place the report before the court. We will not shield anyone in this matter", replied the ASG.

"But the Commissioner should have immediately started the inquiry!", observed Justice Shah.

The ASG sought to submit that the letter was not marked to the Investigating Officer.

"Forget that it was marked to the IO! It has been received by the Commissioner! It was his duty also as the head of the department (to inquire into the contents of the letter)! He should not have waited for even a single day if these allegations are found to be true!", expressed Justice Shah.

In its order, the bench said,

"We have heard Mr K. M. Nataraj, ASG, and specifically queried about the action which has been taken by the Commissioner of Police, Delhi on the receipt of the communication dated August 16, 2021. The contents of the communication reveal serious and disturbing issues. What has concerned the court in particular is that the effort of the court, the jurisdiction of this court is sought to be undermined in complicity with the jail staff, if the contents of the letter are true"

"In this backdrop, we are of the view that the Commissioner of Police must cause an immediate enquiry to be made into the contents of the communication dated August 16, 2021 addressed to him so that all officers and employees who will be found to be complicit in the violation of law are held accountable. This process should commence immediately and a report should be filed before this court within a period of four weeks on the action taken. We also clarify that the enquiry which is directed to be conducted by the Commissioner of Police shall be conducted personally by the Commissioner and shall not be delegated to any other officer", directed the bench.