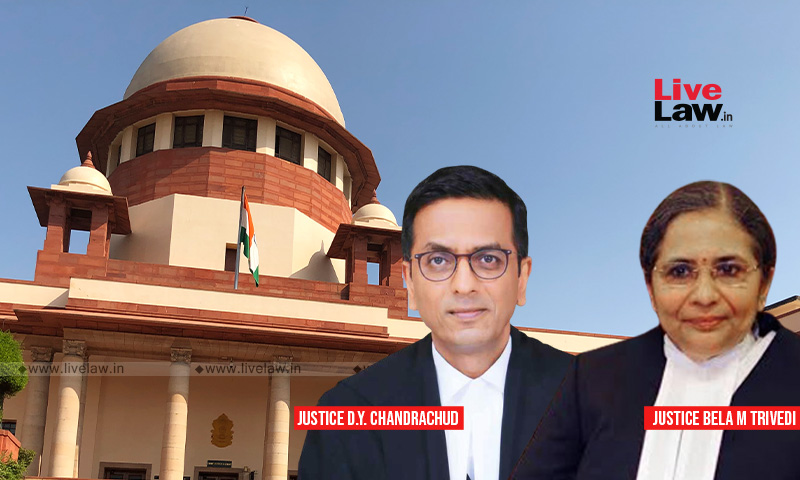 The Supreme Court on Monday rejected a challenge against a High Court's judgment which punished an advocate for contempt of court.

A vacation bench comprising Justices DY Chandracud and Bela M Trivedi was hearing a special leave petition against the Madras High Court's order holding an advocate guilty of Contempt and sentencing him to 2 weeks imprisonment as well as debarring him from practicing for a period of 1 year for obstructing the execution of a non-bailable warrant issued by the HC against him.

"Ultimately you know, judges are assaulted. There is no protection of judges in the district judiciary, sometimes not even a lathi welding policeman. This is happening across the country. You cannot level wanton allegations. Imagine 100 lawyers gathering. Lawyers are also subject to the process of law and we are all citizens of the state. I've seen what happens in other parts of the country and this is becoming a new part of fashion in making allegations against the judges. The stronger the judge, the worse the allegations. This is happening in Bombay, rampant in Uttar Pradesh and now even Madras."

The Division Bench of the High Court had further directed the counsel to not practise in the Madras High Court for a period of one year from the date of this order.

Upholding the High Court's order, the bench in their order said, "Behavior and conduct of the applicant was thoroughly contemnous and there was a clear attempt for obstruction of justice when NBW was issued against him. Allegations have been made against the Single Judge of Madras High Court and recusal was also sought of one of the judges on improper grounds. Petitioner has no respect for the administration of justice. Imposition of sentence cannot be regarded as disproportionate. Therefore no case of interference is made out."

What Transpired In The Supreme Court Today

When the matter was called for hearing, Justice Chandrachud said, "He belongs to a class of lawyers who are absolutely incorrigible. There's a blot on the legal profession. It's too late now. 2 weeks imprisonment is very very lenient. Let him exercise some remorse where he will be in jail for 2 weeks and will be barred for 1 year."

While submitting that Adikesavan had even tendered unconditional apology, petitioner's counsel urged the bench to suspend the sentence imposed on the Advocate. He further sought for his conduct to be monitored by the High Court.

In the present matter, a single bench of Justice PT Asha had issued non bailable warrant against P.R. Adikesavan, Advocate for his appearance before the Court in insolvency proceedings initiated u/s 9 to 13 of the Presidency Towns Insolvency Act, 1909. On 31st March, while an Inspector of Police had sought to execute the warrants he was gheraoed not only by PR Adikesavan but by over fifty Advocates who prevented the personnel from executing High Court's orders.

Considering that PR Adikesavan was fully aware of the pendency of proceedings but deliberately did not appear before the High Court, the Court took cognizance of the act of Criminal Contempt committed by the Advocates.

While the division bench had reserved orders in the the suo moto criminal contempt petition, Adikesavan had filed two sub-applications, one seeking to issue summons to Justice PT Asha for examining her as a witness in this case and another, for recusal of Justice PN Prakash from hearing the case. On receipt of the applications, although the High Court granted him time to make out any valid grievance for the recusal of the judge, but since the Advocate did not represent the same, the bench:

Contempt Of Courts Act, 1971 - Appeal against Madras High Court's order holding advocate guilty of Contempt and sentencing him to 2 weeks imprisonment as well as debarring him from practicing for a period of 1 year for obstructing the execution of a non-bailable warrant issued by the HC against him - Upheld - Appellant has no respect for the administration of justice. The finding of contempt, as well as the sentence cannot be regarded as disproportionate.