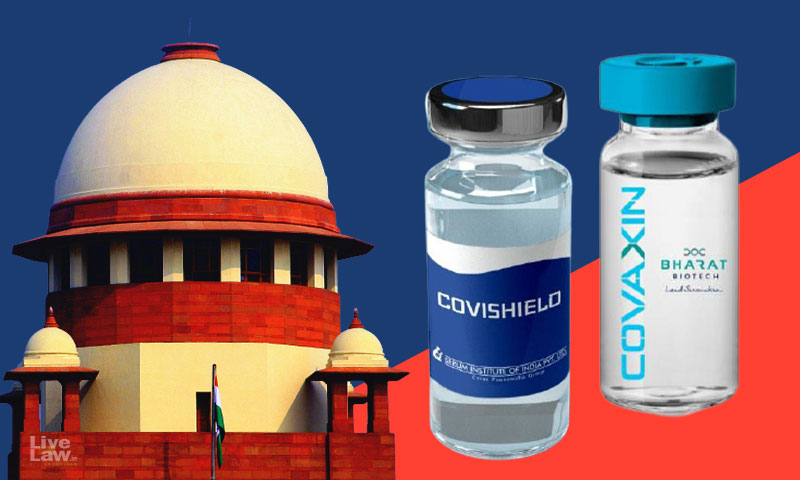 An Application has been filed before Supreme Court in the suo moto matter pertaining to the COVID-19 crisis in the country seeking directions to scale up the production of vaccines against Coronavirus as well as to ensure that the full course of vaccines are available free of charge at all Government hospitals and centres. The Application, filed by Jan Swasthya Abhiyan, further...

An Application has been filed before Supreme Court in the suo moto matter pertaining to the COVID-19 crisis in the country seeking directions to scale up the production of vaccines against Coronavirus as well as to ensure that the full course of vaccines are available free of charge at all Government hospitals and centres.


The Application, filed by Jan Swasthya Abhiyan, further seeks directions to the Centre to continue the current scheme of providing vaccines for people aged 45 and above the full course of vaccines at Rs. 250 in the private sector. It also seeks the quashing of the decision of the Centre to not procure vaccines at a central level with the further direction to procure the same and distribute them to States in accordance with their requirements as has been done in the past 70 years.

It continues to seek directions to issue directions for government authorization under Section 100 or compulsory licence under Section 92 of the Patents Act with a further direction to the DGCI to take measures to share trade secrets related to the manufacturing process of vaccines to scale up the production. It also seeks directions to NPPA to fix the prices of the vaccines in accordance with law.

The Application underlines the shortage of vaccines in the country during the second wave of COVID-19 and states that the primary reason for the shortage is the limited number of manufactures. Further, it submits that there are issues of procurement and arbitrary pricing of the vaccine due to the approach taken by the Union of India.

It is further submitted that another aspect which is a hurdle to widespread manufacture of vaccines is the grant of patents to the manufacturers, i.e. Bharat Biotech and Oxford University, due to which other manufacturers are unable to step in to ramp up the production.

It is then averred in the Application in order to inoculate the entire population of the country, and with only two manufacturers in the marker – Serum Institute of India and Bharat Biotech whose combined production capacity is 65 million a month, the production needs to be increased.

"…with the passage in the last three months only 30 percent of the 40 crores of the persons above the age of 65 years have been inoculated with the first does. It is estimated that in the last 100 days 14.19 crores inoculations have taken place. Of these about 2.4 crores have taken the 2nd dose. This is roughly 1.8% of the total population."

It is also to be noted that other vaccines are also likely to be promoted and that as it is not known how long the immunity lasts, the need may be for about 1.35 billion doses annually. In light of this information, it is necessary for the Centre to transparently disclose its plan about the persons who needs to be vaccinated and how it proposes to increase the production. Despite the Centre now realizing the need to invite other producers, the Application states there is no clarity as to when the products from these facilities will be available in the market and projected number of doses.

The Application then delineates how the decision of the Centre to stop procuring the vaccines centrally and set the prices itself is to the detriment of the interests of the States and ultimately the citizens of India who have a fundamental right to access essential medicines to protect their health.

"…have a duty to ensure that rights of all people in India to health and life are protected. The decision is arbitrary with no rational purpose and defeats the object of procuring vacciens for the people to protect their health".

The Application goes on to explain how the announcement by SII and Bharat Biotech to fix prices of the vaccines, even more so than the price at which the vaccines are being sold abroad, amounts to profiteering at the cost of lives of the citizens of India.

"On its own admission, even the sales at Rs. 150 per dose that SII is selling to the Central Government, it makes a modest profit. Thus, the prices it has set for the State and private market are super profits. It is submitted that private pharmaceutical companies cannot be allowed to profiteer at the expense of the lives and the health of the people of India".

Noting that the development at Oxford University was publicly funded, the Application states that what was supposed to be available for the poor is now being converted by SII to profiteer from.

It has further been submitted that issuing authorization for government use or order for compulsory licence for public non-commercial use in respect of the patents covering the vaccine would do away with the barriers. Further, the Application states that the price should be set under the Drug Price (Control) Order so as to make them affordable and accessible, and that this should be done by the NPPA.

Stating that the lack of limited availability and accessibility of medicines for treatment of COVID-19 violates the Constitutional right to health and life guaranteed under Article 21, it is thus prayed that a vaccine distribution programme is developed by the Centre which ensures vaccines are available to all free of charge.

The Application has been settled by Senior Advocate Anand Grover, drawn by Advocates Rajeshwari Hariharan and Nupur Kumar, and filed by Advocate Astha Sharma.