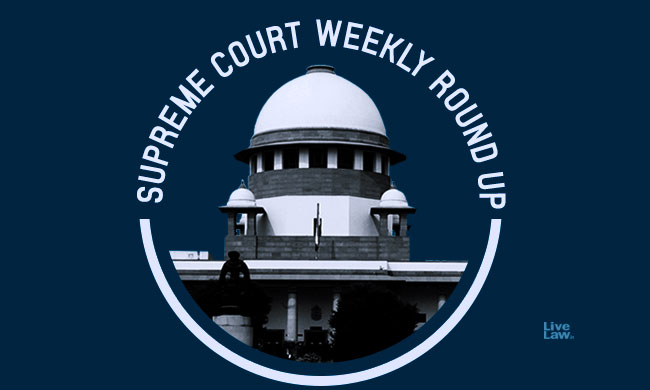 Resigned Govt. Employees Not Entitled To Pension [BSES Yamuna Power Ltd. V. Sh. Ghanshyam Chand Sharma & Anr.] The Supreme Court observed that an employee who has resigned from service is not entitled to pensionary benefits available to those who 'voluntary retired'. The bench noticed that Rule 26 of the CCS Pension Rules provides that the past service of employee...

The Supreme Court observed that an employee who has resigned from service is not entitled to pensionary benefits available to those who 'voluntary retired'. The bench noticed that Rule 26 of the CCS Pension Rules provides that the past service of employee stands forfeited upon resignation. Therefore he is not entitled to pensionary benefits, the bench held.

There Can Be No Reservation Of A Solitary Post [R R Inamdar V. State of Karnataka]

There can be no reservation of a solitary post, reiterated the Supreme Court while upholding a Karnataka High court judgment. The bench comprising Justice Dhananjaya Y. Chandrachud and Justice Ajay Rastogi observed that the Constitution Bench in Post Graduate Institute of Medical Education and Research v Faculty Association had approved the view that there could be no reservation in respect of a single post.

The issue whether coastal states have power to levy sales tax on goods in territorial waters has been left open by the Supreme Court. Notably, the Court set aside the findings of the High Court of Karnataka, which held that State Government has competence to levy tax in territorial waters.

While upholding the punishment of compulsory retirement imposed on a judicial officer, the Supreme Court observed that the standard or yardstick for judging the conduct of the judicial officer has necessarily to be strict. The bench of Justice Ashok Bhushan and Justice Navin Sinha observed that the public has a right to demand virtually irreproachable conduct from anyone performing a judicial function

The Supreme Court asked Google India to face trial in a criminal defamation case by rejecting its plea of immunity from liability as an internet intermediary. The top court said that before the amendment made to Section 79 of the Information Technology Act in 2009, a network service provider was protected only from liability under the IT Act. The protection did not extend to liabilities arising under other enactments, prior to 2009 amendment.

The Constitution Bench of the Supreme Court held that Section 13(2) of the Chhattisgarh Rent Control Act, 2011, is unconstitutional as the State Legislature lacked legislative competence to enact a provision providing direct appeal to Supreme Court of India.

MBBS Course: Admission Can Be Directed To Be Given To Meritorious Candidate Even After Cut Off Date In Exeptional Cases [S. Krishna Sradha V. The State of Andhra Pradesh & Ors.]

The Supreme Court observed that, in exceptional cases, a direction can be issued to grant admission to meritorious candidates to MBBS Course even after cut-off date. The bench of Justices Arun Mishra, MR Shah and BR Gavai was answering a reference made to it by a two judge bench which noticed conflicting views in two judgments in this regard.

SC Directs Awarding Of Grace Marks To Candidates Of Haryana Civil Service (Judicial Branch) Examination 2017 [Pranav Verma & Others V. The Registrar General Of The High Court Of Punjab And Haryana At Chandigarh]

Second Appeal Cannot Be Dismissed On Merits When Appellant Is Unrepresented On The Day Fixed For Hearing [Prabodh Ch. Das vs. Mahamaya Das]

Intoxication Not A Mitigating Factor When Accused Was Not In A Highly Inebriated Condition [Suraj Jagannath Jadhav vs. State of Maharashtra]

The Supreme Court observed that mere intoxication is not a mitigating factor when the accused was not in a highly inebriated condition. The bench of Justice Ashok Bhushan and Justice MR Shah was dealing with a contention that the accused was under the influence of liquor while he poured kerosene and threw match­stick on his deceased wife and set her ablaze and therefore his condition was such that he could not understand what he was doing.

No One Can Be Inflicted With An Adverse Order Without Being Afforded A Minimum Opportunity Of Hearing [M/S Daffodills Pharmaceuticals Ltd. V. State Of U. P. ]

No one can be inflicted with an adverse order, without being afforded a minimum opportunity of hearing, remarked the Supreme Court while quashing an order passed by Uttar Pradesh Government directing its Medical and Health Department to stop local purchase from Daffodills, a pharmaceutical supplier.

The Supreme Court observed that the High Court has inherent power under Section 482 of the Code of Criminal Procedure to recall an order and the provisions of Section 362 Cr.P.C. would not bar it from exercise of such powers.

Other Significant Orders and Proceedings