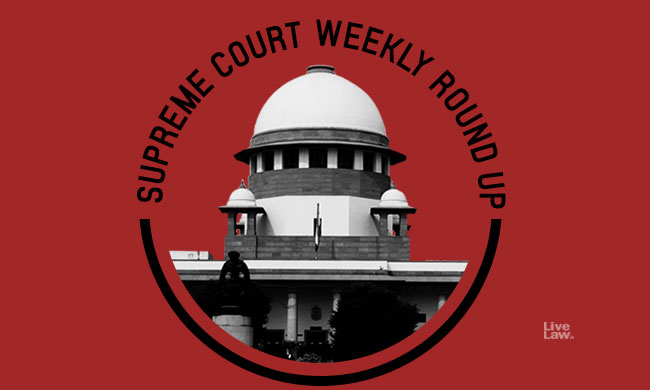 A 5-judge bench of the Supreme Court dismissed the curative petitions of Vinay Sharma and Mukesh, two of the four convicts awaiting execution of death penalty in the Nirbhaya gang rape-murder case. The bench comprising Justices N V Ramana, Arun Mishra, R F Nariman, R Banumathi and Ashok Bhushan said they did not find any merits in the curative petitions.

● Kerala Rent Control Act: Sub-Letting A Part Of Tenanted Premises Gives Landlord The Right To Eviction From The Whole Premises

The bench comprising Justices Sanjay Kishan Kaul and KM Joseph , interpreting the provisions of Kerala Buildings (Lease and Rent Control)Act, 1965, observed that sub-letting of any part of the tenanted premises gives the landlord the right to eviction from the whole premises. The contention taken in this case by the landlord was that even if the sub-tenancy is created in part of the premises, the entitlement of eviction is in respect of the whole of the premises.

The Supreme Court has observed that major sons of the deceased who are married and earning can claim compensation under the Motor Vehicles Act, 1988. The bench comprising Justices AM Khanwilkar and Dinesh Maheshwari observed that the Tribunal has to consider the application filed by such legal representatives irrespective of the fact whether the concerned legal representative was fully dependant on the deceased. The Tribunal cannot limit the claim towards conventional heads only, it held.

The Supreme Court issued notice on petitions which challenge the constitutional validity of the conditions introduced by Insolvency and Bankruptcy Code (Amendment) Ordinance 2019 on the homebuyers' right to file insolvency petition against defaulting builders. A bench comprising Justices R F Nariman and Ravindra Bhat has also ordered status quo on the homebuyers' petitions pending in NCLTs.

The Supreme Court has set aside a Madras High Court order that directed the State to constitute a committee to recommend reforms in the Criminal Justice System. The bench of Justice L. Nageswara Rao and Justice Hemant Gupta observed that the jurisdiction of the Court under Section 439 of the Code of Criminal Procedure is limited to grant or not to grant bail pending trial and it has no inherent jurisdiction to pass any order under the guise of improving the criminal justice system in the State.

The Supreme Court passed a slew of directions to address the protracted problem of air pollution in Delhi. The bench of Justice Arun Misha and Justice Deepak Gupta has passed several directions, dealing right from the problem of stubble burning to vehicular emissions and construction dust. In this regard, the Municipal Corporation of Delhi and the Governments of Haryana, Rajasthan and UP have been asked to file an action taken report within three weeks, along with compliance report of previous directions.

The Apex Court bench of Justice L. Nageswara Rao and Justice Hemant Gupta reiterated that long and continuous possession by itself cannot be termed as adverse possession so as to perfect title within the meaning of Article 65 of the Limitation Act. The plaintiff filed a suit for possession on the basis of purchase of suit property. The defendants in the written statement denied that the plaintiff is the owner of the property. They asserted that their house existed on the property in question for more than the last two centuries.

A Three Judge Bench of the Supreme Court dismissed the review petitions filed by Telecom Company, challenging the Judgement by which Supreme Court allowed the Centre's plea to recover adjusted gross revenue (AGR) of about Rs 92,000 crore from them. In a setback to telecom service providers, the Court had on October 24 last year upheld the definition of adjusted gross revenue formulated by the Department of Telecom (DoT). The Bench comprising of Justices Arun Mishra, S Abdul Nazeer, and MR Shah has considered the Review Petitions in chamber.

The Supreme Court cleared the decks for the construction of international airport at Mopa in Goa, by lifting the suspension of the project's Environmental Clearance. The Court has allowed the construction of the airport in compliance of the additional conditions suggested by the Expert Appraisal Committee (EAC). The Court has directed the National Environmental Engineering Research Institute to oversee compliance with the EAC conditions and directions. The project proponent has to bear the costs, expenses and fees of NEERI.

● Amendment Of Pleadings After Commencement Of Trial

The bench of Justice Ashok Bhushan and Justice MR Shah has observed that the amendment of pleadings at the stage of evidence can be allowed only if the Court is satisfied that in spite of due diligence, the party could not introduce amendment before commencement of the trial. In a partition suit, the evidence had already begun and at that stage, the plaintiff filed application seeking amendment of plaint. The contention taken by the defendant before the Apex Court was that, in view of Order VI Rule 17 of the Code of Civil Procedure, 1908 the amendment could not have been considered unless the Court return a finding that in spite of due diligence, the party could not have raised the matter before the commencement of the trial.

The Supreme Court declined to issue to any direction to the Union of India for conferring the Bharat Ratna on Mahatma Gandhi. "He is much higher than the Bharat Ratna? He is held in much greater esteem by the people!...We agree with your views, we accept your views...but what is the Bharat Ratna for Mahatma Gandhi?", observed Chief Justice S. A. Bobde. "We agree that he should be honoured. But he is the father of the nation! He is far beyond any formal recognition!", continued the CJ. Dismissing the PIL for want of a justifiable cause, the court, however, allowed the petitioner to make a representation before the government in this behalf.

The Supreme Court allowed Congress MP Karti Chidambaram to have the return of Rs 20 crores, which was deposited with the top court's Registry as security for traveling abroad. A bench headed by CJI ordered that the amount should be returned to him.

The Supreme Court has stipulated the terms of reference of the Inquiry Commission that was constituted to investigate into the extrajudicial killings of four men accused of gang-rape and murder of a veterinarian in an alleged encounter with Hyderabad police on December 6. The inquiry was ordered by a bench headed by Chief Justice SA Bobde in the PIL filed by Advocate GS Mani and Pradeep Kumar Yadav, who sought registration of an FIR and subsequent action against the police personnel who were involved in an alleged encounter.

The Supreme Court issued a notice on a petition challenging the Union Ministry's notification for preparation of National Population Register (NPR) A bench headed by the Chief Justice of India said that the matter will be taken along with the batch of anti-CAA petitions on January 22. It is pointed out in the petition that Citizenship (Registration of Citizens and Issue of National Identity Cards) Rules, 2003 give power to the Local Registrar to mark "doubtful citizens" from the National Population Register.

The bench of Justices Uday Umesh Lalit and Indu Malhotra observed that contractual employees engaged by a Company, who draw their wages/salary directly or indirectly from the Company, are entitled to the benefit of provident fund under the Employees' Provident Funds and Miscellaneous Provisions Act, 1952. The Government of India holds 51% shareholding in PAWAN HANS LIMITED and the remaining 49% is held by Oil and Natural Gas Company Ltd. (ONGC). Allowing a writ petition filed by a Trade Union, the High court had held that the benefits under the EPF Act be extended to the members of the Union, and other similarly situated employees. It was held that a liberal view must be taken in extending social security benefits to the contractual employees.

The Supreme Court issued notice on a petition highlighlighting the failure of government policies to provide for adoption of Electric Vehicles in the country in light of the serious impact of fossil fuel based vehicles on Global Warming, Climate Change, & Air Pollution The petition, which was jointly filed by organizations including Centre for Public Interest Litigation, Common Cause and Sitaram Jindal Foundation, raises concerns about the impact of vehicles using non-renewable fossil fuels on climate change and global warming.

A Supreme Court bench comprising Justices Deepak Gupta and Aniruddha Bose issued notices to the National High Speed Rail Corporation Ltd. (NHSRC) and the Gujarat and Central governments on petitions against land acquisition for Mumbai-Ahmedabad bullet train project. Farmers moved the apex court against land acquisition along the 508 km stretch for India's first bullet train, and the bench today sought the response of the authorities, who must clear their stand. The plea by the farmers urges that the land acquisitions is illegal. This allegation was made earlier in a lower court, but was rejected.

● Conviction Cannot Be Solely Based On The Evidence Of Hand-Writing Expert [Padum Kumar v. State of Uttar Pradesh]

The Supreme Court has reiterated that without independent and reliable corroboration, the opinion of the handwriting experts cannot be relied upon to base the conviction. The bench of Justice R. Banumathi and Justice AS Bopanna before acting upon the opinion of the hand-writing expert, prudence requires that the court must see that such evidence is corroborated by other evidence either direct or circumstantial evidence.

The Supreme Court declined to stay the Allahabad High Court's annulment of the election of Samajwadi Party leader Azam Khan's son as an MLA from Suar, UP for having been underage at the time of filing nomination papers. Noting Abdullah Azam Khan's CBSE school certificate which shows him to not have completed the stipulated age of 25, the bench headed by Chief Justice S. A. Bobde, however, issued notice on the plea and agreed to examine it.