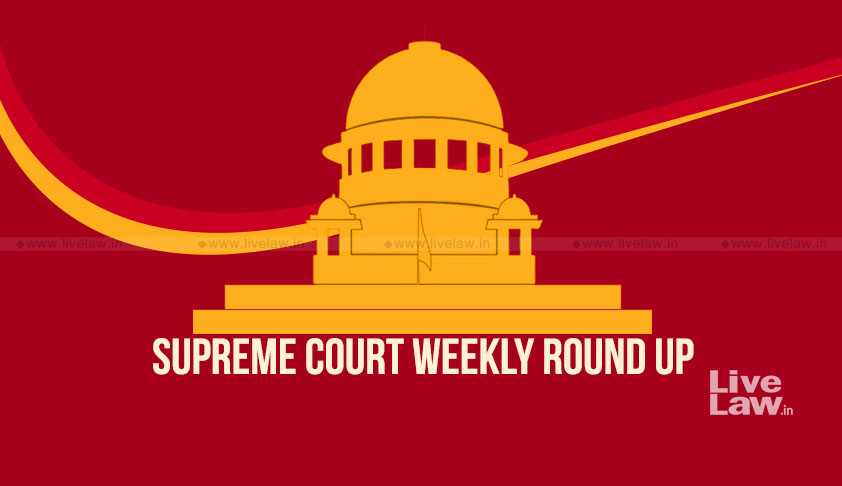 1. India's Freedom Will Rest Safe As Long As Journalists Can Speak To Power Without Being Chilled By A Threat Of Reprisal: SC [Arnab Ranjan Goswami V. Union of India & Ors.]In a writ petition seeking quashing of FIRs filed by Republic TV Editor-in-Chief Arnab Goswami, the Supreme Court observed that to allow a journalist to be subjected to multiple complaints and to...

1. India's Freedom Will Rest Safe As Long As Journalists Can Speak To Power Without Being Chilled By A Threat Of Reprisal: SC [Arnab Ranjan Goswami V. Union of India & Ors.]

In a writ petition seeking quashing of FIRs filed by Republic TV Editor-in-Chief Arnab Goswami, the Supreme Court observed that  to allow a journalist to be subjected to multiple complaints and to the pursuit of remedies traversing multiple states and jurisdictions when faced with successive FIRs and complaints bearing the same foundation, has a stifling effect on the exercise of his freedom. A bench of Justices DY Chandrachud and MR Shah further reiterated that decisions have held that the right of a journalist under Article 19(1)(a) is no higher than the right of the citizen to speak and express, but the society must never forget that one cannot exist without the other and free citizens cannot exist when the news media is chained to adhere to one position. The court therefore refused Goswami's prayer to quash the FIR and transfer probe to CBI.

Also Read: Displeasure Of Accused About The Manner In Which Investigation Proceeds Not A Ground To Transfer Investigation To CBI: SC

The Supreme Court observed that an arbitral award can be set aside under Section 34 of the Arbitration and Conciliation Act if it is patently illegal or perverse. A bench comprising Justices R. Banumathi, Indu Malhotra and Aniruddha Bose observed that ground of patent illegality is a ground available under the statute for setting aside a domestic award made after the 2015 amendment to the Arbitration and Conciliation Act. While confirming the High Court view, the Apex Court dealt with the history of 'Patent illegality' ground. It observed that such a ground for setting aside a domestic award was first expounded in the judgment of Saw Pipes Ltd. Later the ground of "patent illegality" for setting aside a domestic award has been given statutory force in Section 34(2A) of the 1996 Act, it noted

2. To Constitute Civil Contempt, It Must Be Established That Disobedience Is Wilful, Deliberate And With Full Knowledge Of Consequences : SC [The Workmen through the Convenor FCI Labour Federation V. Ravuthar Dawood Naseem and connected cases]

The Supreme Court declined to initiate civil contempt proceedings against the Food Corporation of India, observing that the alleged disobedience was neither wilful nor deliberate. A bench of Justices A M Khanwilkar and Dinesh Maheshwari reiterated the precedent in Ram Kishan vs. Tarun Bajaj & Ors (2014) 16 SCC 204 according to which the "wilful" disobedience of a contemnor has to be established. Court observed that "It is well­-settled principle of law that if two interpretations are possible, and if the action is not contumacious, a contempt proceeding would not be maintainable".

3. Unfair Disposition Or Unjust Exclusion Of Legal Heirs In A Will Can Be Regarded As A Suspicious Circumstance: SC [Kavita Kanwar V. Pamela Mehta & Ors.]

The Supreme Court observed that an unfair disposition of property or an unjust exclusion of the legal heirs, particularly the dependants, is regarded as a suspicious circumstance. A bench of Justices AM Khanwilkar and Dinesh Maheshwari observed that the circumstances extrapolating "suspicious circumstances" taken into account by the Trial Court and the High Court, by itself and standing alone, cannot operate against the validity of the propounded Will. On the other hand, quality and nature of each of these factors and the cumulative effect and impact of all of them upon making of the Will with free agency of the testatrix would be relevant for consideration.

4. Accident Compensation - Income To Be Assessed Based On Employee's Entitlement, Without Deduction Of Allowances : SC [Triveni Kodkany and others vs Air India Ltd.]

While granting the largest compensation in an an individual case, the Supreme court awarded Rs. 7,64,29,437 to the next of kin of the Regional Director of Air India Ltd. who died in the Mangalore Plane crash in 2010. A bench comprising Justices D Y Chandrachud and Ajay Rastogi discussed and applied the principles related to computation of compensation laid down by the Constitution Bench in the case of National Insurance Company Limited V. Pranay Sethi.

Also Read: How To Apply Rate Of Conversion In Compensation Claim With Respect To Earnings In Foreign Currency? SC Explains

In the Vizag Gas leak case, Supreme Court refused to issue notice on a plea filed by LG Polymers against the order passed by National Green Tribunal. The NGT had directed the South Korean company to pay Rupees 50 crores and had also constituted a monitoring committee to look into this issue. LG Polymers stated in Court that it had deposited 50 Crores. A bench comprising Justices Uday Umesh Lalit, Mohan M Shantanagoudar and Vineet Saran took note of this and gave liberty to LG Polymers to raise various concerns on legalities and jurisdiction before the NGT itself on the next date of hearing, which is June 1st, 2020.

5. SC Allows ED to Attach Assets Of JP Morgan And Its Directors To The Extent Of Amounts Allegedly Diverted From Amrapali Homebuyers [Bikram Chatterji & Ors. V. Union of India & Ors.]

The Supreme Court allowed Enforcement Directorate (ED) to attach properties of US-based JP Morgan and its directors to the extent of the amounts allegedly diverted by the now-defunct Amrapali group from homebuyers in violation of the Foreign Exchange Management Act (FEMA) and FDI norms. Based on the submission made by the ED that it has prima facie identified Rs 187 Crores in the accounts of JP Morgan as proceeds of crime under the Prevention of Money Laundering Act (PMLA), a bench of Justices Arun Mishra and Uday Umesh Lalit lifted the embargo created as per order passed on December 2, 2019 not to attach the property of J.P. Morgan and its Directors.

The Supreme Court issued notice on a batch of petitions challenging the constitutional validity of Citizenship (Amendment) Act, 2019. A bench comprising Chief Justice SA Bobde, Justices AS Bopanna and Hrishikesh Roy while issuing notice to the batch of petitions, tagged them along with the other 160 petitions pending considering before the top Court. It was the first time that CAA petitions challenging aspects of the Act's Constitutionality were listed, since imposition of the Coronavirus-induced Lockdown.

The Supreme Court adjourned hearing of the plea challenging the election of Prime Minister Narendra Modi from Varanasi in the 2019 General Elections. A bench comprising of Chief Justice of India SA Bobde, Justices AS Bopanna and Hrishikesh Roy adjourned the matter by a period of 2 weeks after receiving the adjournment letter circulated by Yadav which sought for the matter to be adjourned by 4 weeks.

A Supreme Court bench of Chief Justice of India SA Bobde, Justices AS Bopanna and Hrishikesh Roy issued notice on a PIL seeking ban on usage of the software application "Zoom" by the Indian public until formulation of an appropriate legislation. The plea contends that "Zoom" poses a threat to privacy of the individuals using it and also breaches cyber security.

The Supreme Court took up for hearing a petition filed by the Consulate General of Islamic Republic of Iran qua ill treatment of inmates Mosavi Masood and Mohammad Zaffrani convicted in a NDPS Act case. A bench comprising Chief Justice SA Bobde, Justices AS Bopanna and Hrishikesh Roy disposed off the petition granting liberty to the petitioner to approach the Madras High Court instead.

The Supreme Court dismissed a plea seeking the Top Court's intervention for directions seeking utilising a portion of the State of West Bengal's CM Relief Fund for the well-being of stranded migrant workers. A bench of Chief Justice SA Bobde, Justices A.S. Bopanna and Hrishikesh Roy told the petitioner to approach the Calcutta High Court for purposes of the the plea which sought equal treatment for Indian's in the State of West Bengal as residents of Delhi viz. access to and quality of healthcare services during lockdown situation.