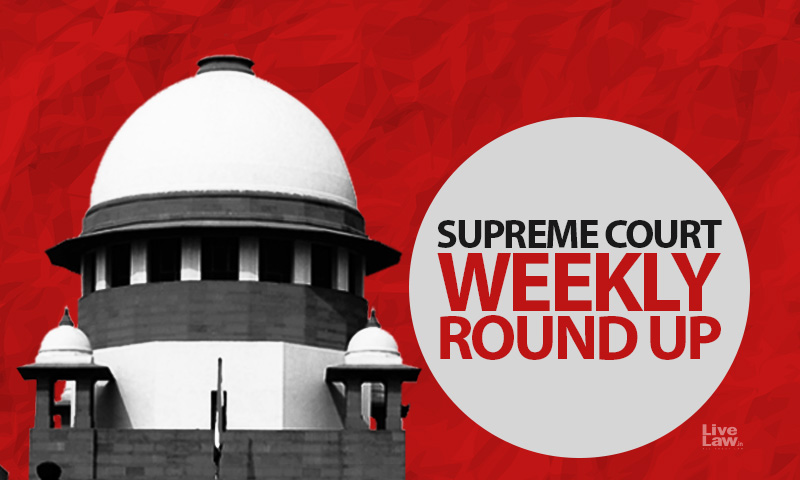 1. Supreme Court Orders Release Of Arnab Goswami From Jail; Says 'Personal Liberty Must Be Upheld' [Arnab Goswami V. State of Maharashtra]The Supreme Court on Wednesday granted interim bail to Republic TV anchor Arnab Goswami,who was arrested on November 4 and has been under judicial custody since then in a criminal case relating to abetment to suicide of interior designer Anvay Naik...

The Supreme Court on Wednesday granted interim bail to Republic TV anchor Arnab Goswami,who was arrested on November 4 and has been under judicial custody since then in a criminal case relating to abetment to suicide of interior designer Anvay Naik in 2018. The top court also allowed the interim release of the co-accused Neetish Sarda and Firoze Mohammed Sheikh in the case. A vacation bench comprising Justices D Y Chandrachud and Indira Banerjee passed the order after an urgent hearing given to the petitions challenging the November 9 order of the Bombay High Court which denied the accused interim bail in the habeas corpus petitions filed by them challenging their custody.

Also Read: "Will Chief Minister Be Arrested If A Person Names Him In Suicide Note For Not Paying Salary?" Salve Argues For Arnab Goswami

Also Read: Arnab Goswami Case : 'If This Court Does Not Interfere Today, We Are Travelling On Path Of Destruction', Says Justice Chandrachud

Also Read: "Judging Is My Life. It's The Best Way To Spend My Birthday!" Justice DY Chandrachud On Arnab Goswami Hearing

The Attorney General for India, KK Venugopal has granted his consent for initiation of contempt proceedings against comedian Kunal Kamra, over his tweets about the Supreme Court in the wake of its order granting interim bail to Arnab Goswami. The AG's letter referred to Kamra's comments such as 'honour has left the building(Supreme Court) long back' and 'Supreme Court of the country is the most Supreme joke of the country'. The AG also noted that apart from these comments, Kamra posted a picture of the Supreme Court dressed in saffron colour with the flag of the ruling party, the BJP.

Also Read: 'Don't Intend To Retract My Tweets Or Apologize', Kunal Kamra Responds To AG's Consent For Contempt Against Him

The Supreme Court on Friday modified the order of Telangana High Court which imposed a complete and immediate ban on the sale and use of firecrackers across the state during Diwali to fall in line with the directions imposed by the National Green Tribunal on November 9. A vacation bench of Justices AM Khanwilkar & Sanjiv Khanna issued notice on the petition and stated that the NGT's guidelines applied to the State of Telangana and that, it shall comply with the directions in letter and spirit.

The Supreme Court on Wednesday affirmed the Calcutta High Court order banning the sale and bursting of firecrackers during Diwali, Chatt Puja, Kali Puja, etc in the entire state of West Bengal. A vacation bench of Justices D Y Chandrachud and Indira Banerjee dismissed the special leave petition filed against the November 5 order passed by a division bench of the High Court. In the brief hearing held on Monday, Justice Chandrachud observed that preservation of life was more important during the COVID-19 pandemic than the celebration of festivals.

The Supreme Court on Tuesday refused to entertain the special leave petition filed by the Delhi government against Delhi High Court's stay on the government order to reserve 80% ICU beds in private hospitals for COVID19 patients. A vacation bench of Justices Ashok Bhushan and BR Gavai asked the single bench of the High Court, which is seized of the matter, to hear and decide the matter early having regard to the urgency of the situation.

The Supreme Court has held that a Magistrate exercising power under Section 14 of the SARFAESI Act is not required to seek permission from the Company Judge before directing handing over of possession of a property. The bench comprising Justice L. Nageswara Rao, Hemant Gupta and Ajay Rastogi observed that a Company Court exercising jurisdiction under the Companies Act has no control in respect of sale of a secured asset by a secured creditor in exercise of powers available to such creditor under Securitization and Reconstruction of Financial Assets and Enforcement of Security Interest Act.

The Supreme Court has dismissed Indian Olympic Association's plea seeking transfer of a writ petition pending before Kerala High Court to Delhi High Court. The Kerala Olympic Association had filed a writ petition before the Kerala High Court challenging the proceedings initiated by the Ethics Commission of the IOA regarding the election held last year. Before the Apex court, the IOA contended that any proceeding against it, as per its own by­laws, could be filed only in a court within the jurisdiction of the Delhi High Court.

The Supreme Court has set aside an indefinite blacklisting order issued in the year 2009 against VETINDIA Pharmaceuticals Limited. An order of blacklisting operates to the prejudice of a commercial person not only in praesenti but also puts a taint which attaches far beyond and may well spell the death knell of the organisation/institution for all times to come described as a civil death, said the bench comprising Justices RF Nariman, Navin Sinha and Krishna Murari.

The President of the Supreme Court Bar Association, Dushyant Dave, has written a letter to the Secretary General of the Supreme Court, strongly protesting against the 'extraordinary urgent listing' of the special leave petition filed by Republic TV Chief, Arnab Goswami, in connection to the 2018 abetment to suicide case. In this backdrop, a vacation bench of Justices D Y Chandrachud and Indira Banerjee had decided to consider the petition of Goswami, who had been under custody since November 4 in the case.