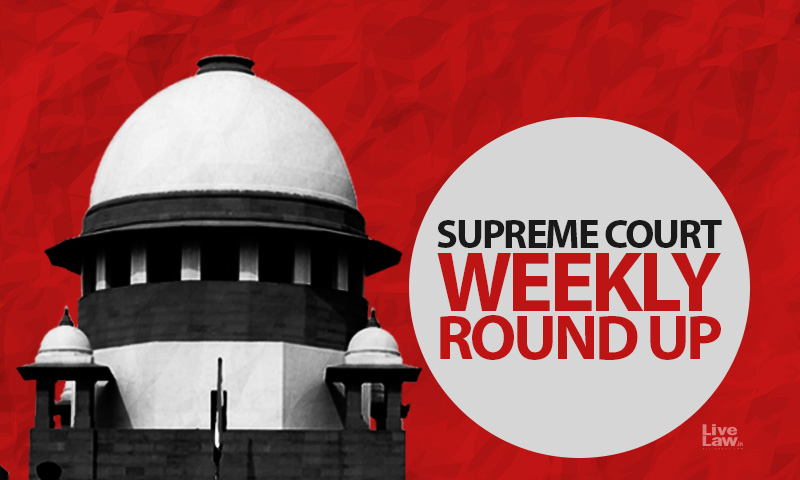 The Supreme Court on Wednesday stayed the Andhra Pradesh High Court's gag order on media reporting and social media comments on the contents of the Amaravati land scam FIR. A bench comprising Justices Ashok Bhushan, R Subhash Reddy and M R Shah passed the stay order on a special leave petition filed by the State of Andhra Pradesh challenging the interim order passed by the High Court on September 15.

The Supreme Court on Tuesday dismissed the petition filed by Ex- BSF Jawan, Tej Bahadur Yadav, challenging the election of Prime Minister Narendra Modi from Varanasi constituency in the 2019 Lok Sabha elections. The judgement was rendered in a Special Leave Petition challenging the Allahabad High Court's dismissal of Bahadur's election petition in December 2019 on the ground of lack of locus standi. The SLP contended that the High Court had failed to appreciate the misuse of provisions under Sections 9 and 33(3) of RPA by the District Election Officer.

3. Deprivation For A Single Day Is A Day To Many, Courts Must Ensure That Criminal Law Does Not Become A Weapon For Selective Harassment Of Citizens: SC In Arnab Goswami Judgment [Arnab Ranjan Goswami V. State of Maharashtra]

The Supreme Court while pronouncing a detailed reasoning behind the grant of release of Arnab Goswami has observed that that "criminal law should not become a tool for selective harassment of citizens". The judgment was pronounced by a Bench of Justices DY Chandrachud and Indira Banerjee today and the court remarked, "Deprivation of Liberty for a single day is a day too many.. ". The bench, while elaborating on the importance of human liberty and the role of courts therein added that the case of Goswami was that he had been targeted because his opinions on television are palatable to the authority. The Justice Chandrachud led bench relied on celebrated judgment in State of Rajasthan, Jaipur vs Balchand, and added that in the case, Justice Krishna Iyer pithily reminded us that the basic rule of our criminal justice system is bail, not jail.

Also Read: A Prima Facie Evaluation Of FIR Does Not Disclose Offence Of Abetment To Suicide Against Arnab Goswami : Supreme Court

In a notable judgment, the Supreme Court on Friday directed the Central Government to constitute a National Tribunal Commission for the appointment of members in various Tribunals. Till the constitution of the National Tribunal Commission, a separate wing in the Ministry of Finance should be formed to cater to the needs of the Tribunals, ordered a bench comprising Justices L Nageswara Rao, Hemant Gupta and S Ravindra Bhat. The Court also directed the Centre to amend the rules to make advocates with 10 years practice eligible for appointment as judicial members in Tribunals.

The Monitoring Committee appointed by Supreme Court for checking illegal use of residential properties for commercial use and establishments in the capital criticised the the Supreme Court's August 14 de-sealing order. On August 14, top court had ordered de-sealing of residential units in Delhi which had been sealed by the Court-appointed Monitoring Committee. A 3-Judge Bench comprising of Justices Arun Mishra, BR Gavai and Krishna Murari had arrived at this decision upon finding that the Committee had never been authorized to take action against the residential premises that were not being used for commercial purposes.

The Supreme Court on Friday extended the parole by a week of AG Perarivalan, a convict in the 1991 assassination of former Prime Minister Rajiv Gandhi, and has directed State of Tamil Nadu to provide an escort for his medical checks. A Bench headed by Justice L. Nageswara Rao was hearing an Application filed by Perarivalan, seeking for extension of his parole, and took into consideration the submissions of Senior Advocate Gopal Sankaranarayanan who requested the Court to direct the State to extend the same by four weeks in light of Perarivalan's kidney damage.

The Supreme Court has dismissed a petition filed by 1993 Mumbai blasts convict Muhammad Moin Faridulla challenging its March 21, 2013 decision upholding the sentence of rigorous imprisonment for life. Qureshi, who was 17 years and 3 months old when he loaded vehicles with explosives and fitted them with timers to devastating effect on March 12, 1993 in Mumbai, had invoked the provisions of Juvenile Justice Act to seek leniency.

Supreme Court on Wednesday dismissed the transfer petition filed by members of Dera Sacha Sauda wherein they sought for the transfer of cases pertaining to sacrilege outside of the State of Punjab. A Single-Judge Bench of Justice Hrishikesh Roy noted in the Order that "The transfer of trial from one State to another would inevitably reflect on the credibility of the State's judiciary. Except for compelling factors and clear situation of deprivation of fair justice, the transfer power should not be evoked".

The Supreme Court on Wednesday heard an application contending that the Indian Army has "not granted Permanent Commission to even 50% of women officers", challenging the arbitrary criterion adopted by Centre to "deny benefit to deserving women candidates". The bench of Justices D. Y. Chandrachud, Indu Malhotra and Indira Banerjee adjourned the matter to December to allow time to the Centre to file its response.

11. 'We Will Bend Our Backs To Do Justice, But Will Also Flex Our Jurisdiction If We Are Being Taken For A Ride': SC Pulls Up Petitioner For Suppression Of Record [Vaibhav Prasad Singh V. UOI]

"We will bend our backs to do justice, but we will also flex our jurisdiction if we are being taken for a ride", was Justice D. Y. Chandrachud's stern observation on Friday. The bench of Justices Chandrachud, Indu Malhotra and Indira Banerjee was hearing a SLP against a September 18 judgment of the Delhi High Court, where the plea of the petitioner, a candidate for recruitment as a Commissioned Officer in the 130th Technical Graduate Course of the Indian Army, impugning the cancellation of his candidature on January 21, was rejected. Subsequently, the review petition had also come to be dismissed on October 7.

The Supreme Court on Thursday reiterated that, by virtue of its 2008 decision in Pushpa Rani's case, where the restructuring of cadres results in creation of new posts, the policy of reservation would apply in effecting promotions to those posts. The bench of Justices U. U. Lalit, Vineet Saran and Ravindra Bhat was hearing a Transferred Case arising out of a writ petition filed by the Union of India in the Patna High Court. An OA was filed before CAT, Patna pertaining to the restructuring of the post of Central Excise Inspector with the higher scale of Superintendent in Bihar. The view of the Tribunal was challenged by the UOI before the High Court. During the pendency of the writ petition, the UOI had requested for its transfer to the Supreme Court on account of similar issues pending before the latter in certain Civil Appeals.

Attorney General KK Venugopal has refused to grant his consent for initiation of criminal contempt proceedings against Advocate Prashant Bhushan for his recent tweet over CJI Bobde's visit to Madhya Pradesh. The AG said that Bhushan has already expressed his regret for making the impugned remakrs against the CJI by stating on Twitter that it was incorrect on his part to say that the fate of the Government of Madhya Pradesh depended on the case pending before the Chief Justice of India.

16. Under Article 32 We Can't Go Into Issues Of Facts: Supreme Court Refuses To Entertain Bank Employee's Challenge To 'Vindictive' Transfer

"Under Article 32 jurisdiction, we cannot go into issues of facts. If we function like this, our court system will collapse", said the Supreme Court on Tuesday. The bench of Justices U. U. Lalit, Vineet Saran and Ravindra Bhat was hearing a writ petition by a Yes Bank employee, Shilesh Sivasankaran, challenging his transfer as being vindictive for having blown the whistle on the bank, seeking a mandamus to the RBI to investigate the matter.

The Supreme Court on Friday took suo motu cognisance of the fire which broke out at a COVID-19 designated hospital in Gujarat's Rajkot in the wee hours of the morning today. The Court stated that the breaking of fires in Covid19 hospitals is repetitive and no legitimate measures were being taken by the authorities to mitigate and prevent these fires in hospitals. The court directed the Centre to bring on record the steps to prevent fires in hospitals by Tuesday next week and also directed the State of Gujarat to submit a report.

18. No Reservation For In-Service Candidates In Super Specialty Medical Courses For 2020-21 : Supreme Court

The Supreme Court on Friday directed the Directorate General of Health Services to proceed with the counseling for admissions to PG super-specialty medical courses for the academic year 2020-21 without providing reservation for in-service candidates. The top court clarified that the direction is applicable only to the admissions of the present academic year 2020-21. "The process for admissions to Super Specialty Medical Courses started on 03.08.2020 and it was made clear to all the competing candidates that there shall be no reservation to Super Specialty Medical Courses....As the admission process is at the final stages, we cannot permit reservation for in-service Doctors for this year", the court observed.

19. Quashing Of Criminal Complaint Should Be An Exception And A Rarity Than An Ordinary Rule: Supreme Court [SKODA AUTO VOLKSWAGEN INDIA PRIVATE LIMITED VS. STATE OF UTTAR PRADESH]

Quashing of a complaint should rather be an exception and a rarity than an ordinary rule, the Supreme Court observed while refusing to quash an FIR registered against Skoda-Volkswagen over alleged cheat emissions devices installed in vehicles. The CJI SA Bobde led bench observed that, if a perusal of the first information report leads to disclosure of an offence even broadly, law courts are barred from usurping the jurisdiction of the police. The two organs of the State operate in two specific spheres of activities and one ought not to tread over the other sphere, the bench said.

20. 'It Appears Very Easy From Outside, We Will See': SC Grants 4 Weeks To Its Secretary General To File Response To Plea For Appointment Of Additional Judges U/A 128 [Lok Prahari V. UOI]

The Supreme Court on Thursday allowed 4 weeks' time to its Secretary General to file response on a plea seeking appointment of additional judges to the top court. The bench of Chief Justice S. A. Bobde, A. S. Bopanna and V. Ramasubramanian was hearing a 2019 writ petition by NGO Lok Prahari with the aforesaid prayer.

The Supreme Court on Thursday adjourned by two weeks a plea seeking for a judicial inquiry into an incident which took place in Aurangabad, Bihar, wherein a District Judge, Dr. Dinesh Kumar Pradhan, was allegedly threatened, abused and chased by a police sub-inspector.

22. General Allegation Of 'Surcharged Atmosphere' Is Not Sufficient To Transfer Trial From One One Court To Another: Supreme Court [Jatinderveer Arora vs. State of Punjab]

The Supreme Court has observed that a general allegation of surcharged atmosphere is not sufficient to transfer trial from one one Court to another. "The transfer of trial from one state to another would inevitably reflect on the credibility of the State's judiciary. Except for compelling factors and clear situation of deprivation of fair justice, the transfer power should not be invoked.", Justice Hrishikesh Roy observed while dismissing transfer petition filed by Jatinderveer Arora and others seeking transfer of Trial of criminal cases pending before the Courts at Bhatinda, Moga and Faridkot districts to competent Court in Delhi or to any nearby State, out of Punjab.