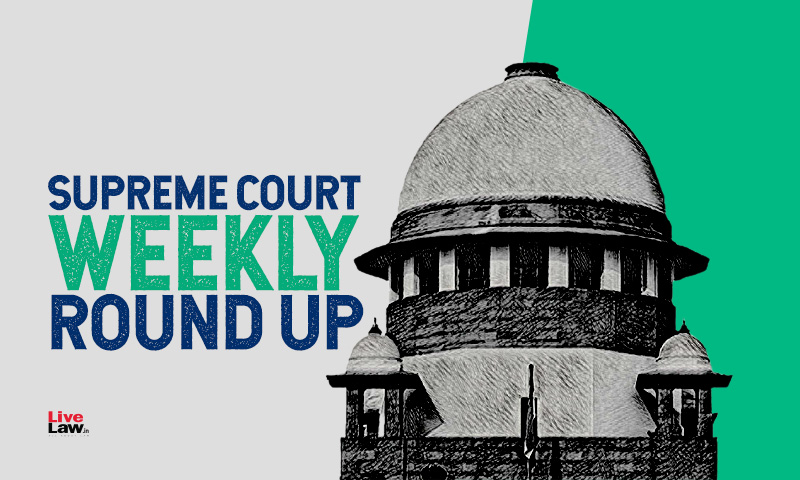 A division bench comprising Justices Vineet Saran and Dinesh Maheshwari has held that a dissenting secured creditor cannot challenge a resolution plan approved under the Insolvency and Bankruptcy Code(IBC) with an argument that higher amount should have been paid to it on the basis of the security interest held by it over the corporate debtor.

The Court observed that it is against the scheme of IBC to hold that a secured creditor is entitled to the amount in reference to its security interest. The Supreme Court observed that the amendment to sub-section (4) of Section 30 only amplified considerations for the Committee of Creditors while exercising its commercial wisdom so as to take an informed decision in regard to the viability and feasibility of resolution plan, with fairness of distribution amongst similarly situated creditors.

"..what amount is to be paid to different classes or sub-classes of creditors in accordance with provisions of the Code and the related Regulations, is essentially the commercial wisdom of the Committee of Creditors; and a dissenting secured creditor like the appellant cannot suggest a higher amount to be paid to it with reference to the value of the security interest" the bench said.

A division bench comprising Justice UU Lalit and Justice Indira Banerjee has held that there cannot be a recovery of cess solely on the basis of the report of the Comptroller and Auditor General (CAG) without any statutory adjudication process.

The Court upheld a judgment of Allahabad High Court which had quashed the orders issued by the Uttar Pradesh Power Transmission Corporation Ltd (UPPTCL) directing a contractor to remit Labour Cess amounting to Rs.2,60,68,814/-.

3. "Accused Has Right To Hearing Of His Bail Application" Supreme Court Expresses Shock Over Bail Plea Not Being Listed For A Year

A division Bench of Justice Hemant Gupta and Justice V Ramasubramanian observed that the accused has a right of hearing of his application for bail and denial of the same is an infringement of his right and liberty.

"The accused has a right to hearing of his application for bail. In fact, the denial of hearing is an infringement of right and liberty assured to an accused." the Bench said.

While observing that the Court normally does not interfere with an interim order passed by the High Court, the Bench stated that it is "constrained to pass the present order as they are shocked to see that theSupreme Courtunder Section 439 CrPC is not being listed for hearing for more than one year."

The Court was hearing a special leave petition filed against order declining the request for hearing of an application for bail under Section 439 of the Code of Criminal Procedure, 1973, pending since 28th Feb 2020.

Also Read: At least Half Of HC Judges Should Sit On Alternative Days To Hear Persons In Distress, Non-Listing Of Bail Application Impinges On Liberty Of Accused: SC

The Union of India has told the Supreme Court that payment of ex-gratia compensation to all deceased persons due to COVID-19, is beyond the fiscal affordability of the Governments, as the finances of State Governments and the Central Government are under severe strain, due to the reduction in tax revenues and increase in health expenses on account of the pandemic.

"It is an unfortunate but important fact that the resources of the Governments have limits and any additional burden through ex-gratia will reduce the funds available for other health and welfare schemes." Centre has said.

2. Social Activist Medha Patkar Moves SC Seeking Uniform Policy For Release Of Prisoners Aged 70 And Above For Decongestion Of Prisons

Social activist Medha Patkar has approached the Supreme Court for directions to States/Union Territories/High-Powered Committees (HPC) to formulate a uniform mechanism in order to decongest prisons across India, with respect to the release of prisoners aged above 70.

The plea filed through Advocate Vipin Nair submits that the World Health Organisation has declared that COVID-19 causes higher mortality amongst older persons, particularly in persons with underlying medical conditions, such as cardiovascular disease, chronic respiratory disease, diabetes, and cancer. Consequently, it is stated, that the Ministry of Health has also issued a Health Advisory for Elderly people, highlighting ways to reduce mortality rates amongst prisoners.

While the HPCs were constituted, the petition contends that "as most of the categorization of prisoners are based on social conditions and are based on factors of administrative convenience, the HPCs have not taken into account the categorization of prisoners on the basis of their susceptibility to the infection and their need to be released on an urgent basis. The most susceptible ones here are the aged/elderly prisoners who have a higher chance of getting infected (specifically septuagenarian prisoners, i.e. above 70 years)."

The Petitioners have also prayed for a direction to the CBSE Board to arrive at a formula for performance evaluation of the Class XII private / compartment / repeaters students in line with the assessment formula adopted by CBSE and other Education Boards for the regular students and to release the results in a time bound manner.

The Petition filed through Advocate Manu Jaitley and Advocate Abhishek Choudhary also seeks a direction to CBSE Board to arrive at a formula for performance evaluation of the Class X private / compartment / repeaters students in an expedite manner and to release the results in a time bound manner.

Justice Indira Banerjee of the Supreme Court this week recused from hearing a petition seeking CBI/SIT probe into the killings of two BJP workers during the post-poll violence which happened in West Bengal.

A division Bench of Justice Indira Banerjee and Justice MR Shah was hearing a writ petition filed by Biswajit Sarkar, brother of deceased BJP member Avijit Sarkar who was allegedly killed by Trinamool Congress members during the post-poll violence in West Bengal.

5. Supreme Court Issues Notice On Delhi Police Appeal Against Bail Granted To Student Activists In Riots Case; Says HC Judgment Shall Not Be Treated As Precedent In Meantime

Issuing notice on the appeal filed by the Delhi Police against the Delhi High Court order granting bail to 3 student activists in the Delhi riots conspiracy case, the Supreme Court this week said that the impugned judgment shall not be be treated as a precedent until the matter is finally decided.

The bench said that it was "troubling" that the High Court has gone on to narrow down the scope of UAPA in a bail application when there was no challenge to the statute.

Also Read: 'HC Judgment Waters Down UAPA, Dilutes It, Reads It Down & Says That Otherwise It Would Not Pass Muster Of Parliament': SG Tushar Mehta Tells SC -Courtroom Exchange

The Supreme Court this week stayed the investigation in the FIRs registered in 5 states against actor Munmun Dutta in several parts of the country over a 'Bhangi' remark, a casteist slur, made by her in a video posted in social media.

A vacation bench comprising Justices Hemant Gupta and V Ramasubramanian also issued notice on her prayer to club the FIRs lodged in 5 states with the FIR registered in Haryana.

The Court has stayed the investigation in the FIRs registered in the States of Gujarat, Madhya Pradesh, New Delhi,Maharashtra and Uttar Pradesh. However, while refraining from issuing directions to curb future filing of FIRs, the Court remarked that the petitioner could approach the Court in case of the same.

The Supreme Court this week refused to pass orders for postponement of final year examinations of Post Graduate medical courses in a a plea filed by a group of 29 Doctors Post-graduate Medical Residents.

A vacation bench comprising Justices Indira Banerjee and MR Shah observed that the dates of exams are to be announced by several universities spread over the country and hence no general orders can be passed by the Court. The different medical universities are not made parties in the case, the bench noted.

The bench observed that wherever relief was possible, the court has granted it, such as the postponement of the INI CET exam which was ordered by the court last week. However, this was a case where the court cannot grant relief, the bench added.

While highlighting the 'financial ruin' faced by migrant workers in wake of the pandemic, two Civil Society Organisations have moved the Supreme Court to suggest measures for food security and registration of migrant workers, that can be undertaken by Central and State Governments to help alleviate their issues.

The applicants have proposed that the Atmanirbhar Bharat Scheme should be resumed for distribution of food grains free of cost to migrant workers without ration cards till December 2021, and free food grains should be provided to State Governments instead of requiring them to purchase grains through the OMSS from the Food Corporation of India.

The applicants have also suggested that the One Nation One Ration Card Scheme should be implemented so that the 11 States and 8 Union territories who are yet to implement it, do so forthwith.

Supreme Court this week accepted the scheme formulated by CBSE and ICSE for evaluation of students, while asking the Boards to incorporate the provision for dispute resolution in case students want correction of final result declared, and to provide a timeline for optional exams would be declared.

While hearing the filed by Advocate Mamata seeking cancellation of the Class 12 CBSE and ICSE written exams, a Bench of Justice AM Khanwilkar and Justice Dinesh Maheshwari observed that both CBSE and ICSE are free to notify the final scheme howsoever it may wish to do so and inform the Court on next date of hearing.

The Bench also refused to take forward the prayer made by intervenor that the decision of CBSE and ICSE to cancel the exam be revisited.

Also Read: Assessment Under CBSE Scheme Would Replicate, As Far As Possible, Marks Which Students Would Have Obtained In In-Person Examination: AG KK Venugopal To SC

Accepting the compensation of Rupees 10 crores deposited by the Republic of Italy, the Supreme Court this week quashed the criminal proceedings pending in India against against two Italian Marines -Massimilano Latorre and Salvatore Girone - with respect to the 2012 sea-firing incident near Kerala coast which killed two Indian fishermen.

The Court has directed the transfer of the amount of Rupees 10 crores - deposited with the Supreme Court Registry - to the High Court of Kerala.

The top court requested the Chief Justice of Kerala High Court to nominate a Judge to pass appropriate order of disbursement to protect interest of heirs & ensure it's recieved by them. The Bench that noted Owner of damaged Boat, Union of India, State of Kerala and heirs of deceased have agreed to accept the award.

The Notification issued by the Ministry of Home Affairs on 28th May, 2021 has no relation with the Citizenship (Amendment) Act, 2019, the Centre has submitted to the Supreme Court in response to an Intervention Application filed by the Indian Union Muslim League against the impugned notification.

The Counter-Affidavit filed by the Centre submits that the impugned notification merely seeks to delegate power of the Central Government to the local authorities in particular cases. It reads:

"The said notification does not provide for any relaxations to the foreigners and applies only to foreigners who have entered the country legally as the Central Government used its authority under Section 16 of the Citizenship Act and delegated its powers to grant citizenship by Registration or Naturalisation to District Collectors. It is submitted that it merely an administrative delegation of power without any specific classification or relaxation".