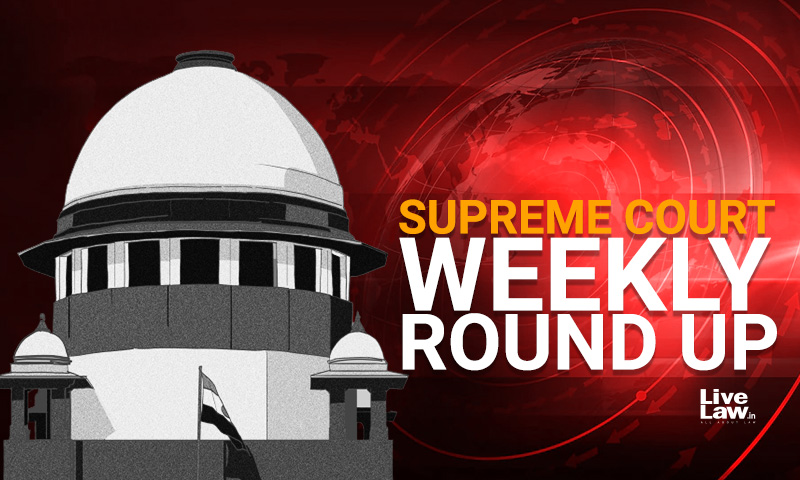 Case Title : Krishna Rai (Dead) Through LRs versus The Banaras Hindu University & Others

The Supreme Court recently held that the principle of estoppel or acquiescence will not apply in a selection process when it is held contrary to the relevant rules.

The Supreme Court has reiterated that whether two or more acts constitute the same transaction for the purpose of being tried together under Section 220 of the Code of Criminal Procedure (Cr.P.C), is purely a question of fact. The reasonable determination of the same would however depend on elements like proximity of time, unity or proximity of place, continuity of action and community of purpose or design.

A Bench comprising Justices Dinesh Maheshwari and Vikram Nath dismissed an appeal assailing the order of the Uttarakhand High Court, which had upheld the decision of the Court of Sessions Judge, Chamoli to discharge the accused in respect of a set of offences (S. 376 IPC) for want of jurisdiction. The Sessions Court was of the opinion that the offences alleged by the appellant (one set under S. 376 IPC; and the other under S. 504 and 506 IPC] did not meet the requirement of Section 220 Cr.P.C. for being tried together.

Stating that "in a matter involving personal liberty, the Court is expected to pass orders in one way or other taking into account the merits of the matter at the earliest", the Supreme Court has observed that "posting an application for anticipatory bail after a couple of months cannot be appreciated".

4. S 311 CrPC - Witness Can't Be Recalled Merely Because He Gave A Different Statement In Another Case Relating To Same Incident : Supreme Court

The Supreme Court has held that "merely because a different statement was given by the same prosecution witness in another case relating to the same incident, that itself would not be a reason for recalling the witness under section 311, Cr. P. C."

The Supreme Court has upheld the death penalty awarded to a 37-year old man for the rape and murder of a seven and a half year old girl who was mentally and physically challenged.

The crime occurred in 2013 in Rajasthan, when the convict Manoj Pratap Singh was around 28 years old.

A 3-judges bench comprising Justices AM Khanwilkar, Dinesh Maheshwari and CT Ravikumar observed that the crime in question had been of "extreme depravity", particularly looking at the vulnerable state of the victim and also the manner of committing the crime.

Also Read: It Has Never Been The Effort Of Courts To Make Death Penalty Redundant Or Non Existent : Supreme Court

Case Title: Zakia Ahsan Jafri and another versus State of Gujarat and another | Diary No.34207/2018

The Supreme Court has dismissed a petition filed by Zakia Ehsan Jafri challenging the closure report filed by SIT discarding the allegations of larger conspiracy by high state functionaries including the then Gujarat Chief Minister Narendra Modi and 63 others in the Gujarat riots of 2002 that ensued the Godhra train massacre.

A bench comprising Justices AM Khanwilkar, Dinesh Maheshwari and CT Ravikumar upheld the decision of the Magistrate in accepting the closure report filed by the Special Investigation Team in the larger conspiracy case.

The Supreme Court on Monday refused to allow the temporary release of Maharashtra MLAs Nawab Malik and Anil Deshmukh from the prison for casting vote in the Maharashtra Legislative Council elections, which is going on today.

A vacation bench comprising Justices CT Ravikumar and Sudhanshu Dhulia refused to grant interim relief in the Special Leave Petition filed by the legislators against the order passed by the Bombay High Court on June 17 refusing to grant them temporary release for casting vote in MLC polls.

The Supreme Court on Monday said that it will examine the locus standi of the National Company Law Tribunal Bar Association in challenging the Centre's notification fixing the term of 23 NCLT members appointed in 2019 as 3 years instead of 5 years.

The Supreme Court on Tuesday said that the PIL preferred by Advocate Harsh Ajay Singh seeking issuance of directions to the Center for reconsideration of Agnipah recruitment scheme could be listed only after it is placed before the Chief Justice of India.

The Enforcement Directorate on Tuesday opposed the shifting of alleged conman Sukesh Chandrashekhar from Tihar Jail and said that he should be prosecuted for perjury for making false allegations of torture and assault in jail.

Solicitor General of India Tushar Mehta, appearing for the ED, submitted before a vacation bench comprising Justices CT Ravikumar and Sudhanshu Dhulia that even in jail, he continued his illegal activities in collusion with prison officials.

"He impersonated the Law Secretary, Home Secretary and even made calls to judges", the SG submitted, adding that all details are mentioned in the latest affidavit filed by the ED.

5. Demolitions Not Punitive Actions Against Rioting But For Violations; Due Process Of Law Followed : UP Govt Tells Supreme Court

The State of Uttar Pradesh has submitted before the Supreme Court that the recent demolitions carried out in Kanpur and Prayagraj were done by Local Development Authorities strictly in accordance with the Uttar Pradesh Urban Planning and Development Act, 1973.

The submissions have been made by the State through its affidavit filed response to the applications filed by Jamiat Ulama-I-Hind which alleged that the demolitions were selective actions targeting the minority community for protests in relation to the remarks on Prophet Muhammed.

The State has submitted that the Petitioner has "cherry picked" two demolition actions of illegal constructions in the properties of one Mr. Ishtiaq Ahmad and one Mr. Riyaz Ahmed that took place in Kanpur in an attempt to falsely link the same to the rioting.

6. Maharashtra Political Crisis : Plea In Supreme Court Seeks To Ban MLAs Who Defect Or Resign From Elections For 5 Years

Amidst the political crisis unfolding in Maharashtra, an application has been filed in the Supreme Court seeking to restrain the MLAs who are disqualified or have resigned from contesting elections upto five years from the date of their resignation or disqualification.

The Supreme Court on Thursday told Advocate Ashwini Updahyay that the PIL seeking direction to Delhi Government to sack its Health Minister Satyendar Jain & to Maharashtra Government to sack its Cabinet Minister Nawab Malik, in connection with money laundering cases being investigated against them, could only be posted after it us placed before the Chief Justice of India.

The Supreme Court on Thursday dismissed a writ petition seeking to declare the 92 in-service quota seats of NEET SS 2021 surrendered by the State of Tamil Nadu as newly added seats and make them available to all candidates irrespective of their joining in earlier rounds.

The Court referred to the order passed on May 9 by which mop-up round was allowed for all the unfilled/stray/vacant super-speciality seats. Citiing this order, the vacation bench comprising Justices CT Ravikumar and Sudhanshu Dhulia said that no further direction can be passed.

The bench said that it cannot entertain the new petition merely because the petitioner was not a party to the previous petition (in which the May 9 order was passed).

Enforcement Directorate on Thursday informed the Supreme Court that it proposes to shift alleged conman Sukesh Chandrashekhar and his wife Leena Paulose who are currently lodged in Tihar Jail to Mandoli Jail in Delhi.

On Senior Advocate R Basant's objection to transfer of Chandrashekhar to Mandoli Jail, the vacation bench of Justices CT Ravikumar and Sudhanshu Dhulia, while adjourning the matter to June 30, permitted Chandrashekar to file a statement in response to the ED's submission.

The Supreme Court on Thursday extended the interim protection from the arrest of BJP MLA Jayakumar Gore who has been accused of allegedly forging documents in the name of a deceased person till July 1, 2022.

"List this matter next Friday. Interim protection granted by the HC in the impugned order will continue till then."

11. What Is The Term Of Bond For Junior Doctors Who Completed MBBS From ESIC Institutions? Supreme Court Asks ESI Corporation

The Supreme Court on Friday asked Employees State Insurance Corporation to confirm if the term of the bond for doctors who have completed MBBS from ESIC-run institutions to serve such institutions has been changed to one year from five years.

The Court has sought an affidavit from the ESIC in this regard.

A vacation bench of Justices CT Ravikumar and Sudhanshu Dhulia was considering a writ filed by Junior Resident Doctors of ESIC hospitals seeking to be included in 50% in service doctors quota for PG courses.

The Supreme Court on Friday agreed to list on June 27, 2022 SLP preferred by Latif Magrey, father of Amir Magrey who was killed in Hyderpora Encounter in Srinagar assailing order passed by Jammu and Kashmir High Court of staying the exhumation of his son's body.

The Supreme Court recently dismissed an appeal filed by an insurance company against an order of the National Consumer Disputes Redressal Commission which allowed a claim.

"Still, the Insurance Company insisted for producing the document, which was beyond the control of the insured", the Court noted.

An advocate has filed a writ in the Supreme Court seeking issuance of directions to the Centre to reconsider its "Agnipath" recruitment scheme for armed forces. Preferred by Advocate Harsh Ajay Singh, the writ states that the announcement of the Scheme has caused nation-wide protest in Bihar, UP, Telangana, Haryana, Uttarakhand, West Bengal and various other states due to the short- term duration of the scheme in the Indian Army for four years coupled with future uncertainties of the trained 'Agniveers'.

A PIL has been filed in Supreme Court challenging the Centre's "Agnipath" recruitment scheme for armed forces.

The petition filed by serial PIL litigant Advocate ML Sharma has sought to quash the notification dated June 14, 2022 issued by the Ministry of Defence, contending that the same is "illegal, unconstitutional and void ab-initio & ultra vires to the constitution of India in the interest of justice".

The Supreme Court has stayed a Bombay High Court order directing Bajaj Allianz General Insurance to compensate, under the Pradhan Mantri Fasal Bima Yojana, 3,57,287 agriculturists in the Osmanabad District of Maharashtra for post harvesting losses caused to Soyabean Crop in the Kharif Season 2020 on account of heavy rainfall.