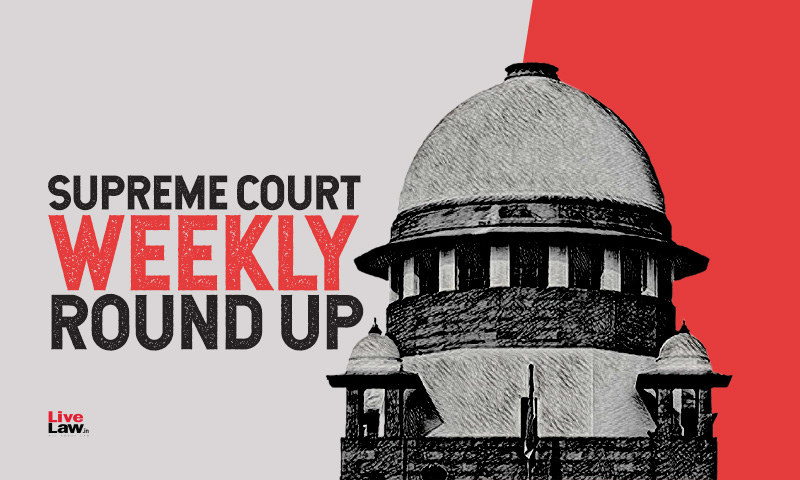 The Supreme Court observed that part-time temporary employees in a Government-run institution cannot claim parity in salary with regular employees of the Government on the principle of equal pay for equal work.

The bench of Justices MR Shah and AS Bopanna in the present matter was dealing with an appeal filed by the Centre assailing order passed by the Punjab and Haryana High Court wherein the Court had directed the Centre to revisit the whole issue related to regularisation policy, complete the exercise to reformulate their regularization/absorption policy and take a decision to sanction the posts in a phased manner.

The Supreme Court observed that a civil court lacks jurisdiction to entertain a suit structured on the provisions of the Industrial Disputes Act.

In this case, the plaintiff, who was a daily wage employee under the Himachal Pradesh State Electricity Board, challenged his termination by filing a suit before a civil court. The suit was decreed ordering reinstatement of the plaintiff with back wages. This decree was upheld by the Appellate Courts.

3. Conviction Or Acquittal Cannot Be Set Aside Merely Because There Was A Possibility Of A Joint Or Separate Trial: Supreme Court Formulates Principles

The Supreme Court observed that a conviction or acquittal of the accused cannot be set aside on the mere ground that there was a possibility of a joint or a separate trial.

To set aside the order of conviction or acquittal, it must be proved that the rights of the parties were prejudiced because of the joint or separate trial, the bench of Justices DY Chandrachud, Vikram Nath and BV Nagarathna observed.

The bench was considering an appeal against a judgment of the High Court of Punjab and Haryana which in a batch of nine criminal appeals remitted the orders of acquittal and conviction arising out of two separate FIRs [one on rape and another for abetment of suicide] for fresh trial and directed that the proceedings arising out of both the FIRs be clubbed together under Section 223 CrPC and be tried together by one court.

The Supreme Court has declared that the National Green Tribunal is vested with suo motu powers to cognizance on the basis of letters, representation and media reports.

A Bench comprising of Justices A.M.Khanwilkar, Hrishikesh Roy and C.T.Ravikumar delivered the judgment on a batch of petitions (Municipal Corporation of Greater Mumbai v. Ankita Sinha and other and connected cases) which raised the issue whether NGT has suo motu jurisdiction. The judgment authored by Justice Hrishikesh Roy held that NGT is vested with suo motu power in discharge of its functions under the NGT Act.

The Supreme Court has recalled an order granting custody of a child to a Kenyan citizen of Indian origin after finding that he had played fraud on the court and had approached it with "unclean hands" by suppressing material facts( Smriti Madan Kansangra v. Perry Kansangra).

The Court declared its earlier order granting custody to the father who played fraud as "illegal" and "ab initio void".

Observing that the party has defied the conditions imposed by the Court for taking the child to Kenya after securing his custody, the Court directed the CBI to initiate proceedings to secure and entrust the custody of the child to his mother.

The Court also asked the Centre and the Indian mission in Kenya to help the mother and ordered registration of a suo motu contempt case against Perry Kansagra, the father of the child. The Court has directed Perry Kansagra's physical presence before it on November 16 and asked the registry to pay Rs 25 lakh as litigation cost, from the amount deposited earlier by him with it, to his wife.

In a plea seeking clarification of top Court's order directing schools to not debar any student from attending classes on account of non­payment of fees, Supreme Court on Wednesday permitted the School Managements to initiate appropriate action in accordance with law for recovery of the outstanding fees from students who have defaulted.

A Bench comprising Justice AM Khanwilkar and Justice CT Ravikumar has left it open to the School Management to consider the requests, if any, made by parent or ward seeking some indulgence for just reasons, compassionately.

7. Supreme Court Issues Guidelines On Grant Of Bail To Accused Not Arrested During Investigation On Filing Of Chargesheet

The Supreme Court has issued guidelines on the aspect of grant of bail to accused who are not arrested during investigation on charge sheet being filed.

The bench comprising of Justices Sanjay Kishan Kaul and MM Sundresh accepted the suggestions made by Additional Solicitor General SV Raja and Senior Advocate Sidharth Luthra in this regard. The requisite conditions for this guideline to apply are (1) Not arrested during investigation. (2) Cooperated throughout in the investigation including appearing before Investigating Officer whenever called.

The Supreme Court has held that an additional bill raised by an Electricity Distribution Company as a licensee under the Electricity Act, 2003, after detecting a mistake, will not be hit by the two years limitation under Section 56(2) of the Act.

Section 56(2) says that "no sum due from any consumer, under this section shall be recoverable after the period of two years from the date when such sum became first due".

The Supreme Court held that any claim made by the licensee after the detection of their mistake may not fall within the mischief, namely, "no sum due from any consumer under this Section", appearing in Sub­section (2) of Section 56.

9. COVID Deaths- Hospitals Should Provide All Documents To Family Of Deceased As & When Demanded : Supreme Court

The Supreme Court directed all hospitals which provided treatment to Cvid patients to provide all necessary documents of treatment etc. to the family members of those who succumbed to the pandemic, as and when demanded.

The observations have been made in relation to documents required to establish Covid as the cause of death to enable the next of the kin to receive the ex gratia compensation being provided to families of covid victims.

1. Lakhimpur Kheri Violence : Supreme Court 'Not Satisfied' With UP Police Probe; Asks 'Is This The Way You Treat Accused In Other Murder Cases?By Sending Summons?'

The Supreme Court recorded its dissatisfaction over the investigation done by the Uttar Pradesh Police in the Lakhimpur Kheri violence, which claimed the lives of 8 people, four of them being farmers protesters who were allegedly mowed down by the vehicles in the convoy of Ashish Mishra, the son of Union Minister and BJP MP Ajay Kumar Mishra.

A bench led by the Chief Justice of India recorded in the order that the court was not satisfied with the actions of the state.

"We are not satisfied with the actions of the state...", the bench recorded in the order.

The Supreme Court slaps Rs. 5000 costs on a person who challenged demolition of a "Corona Mata Mandir" constructed by her.

One Deepmala Srivastava had filed a writ petition under Article 32 of the Constitution of India and contended that her fundamental rights have been infringed after a temple constructed by her with collaboration with her husband for "Corona Mata Mandir" has been demolished.

3. Virtual Hearing Can't Be A Norm; Rights Of Public To Have Open Court Can Be Protected By Live-Streaming : Supreme Court

The Supreme Court on Friday orally remarked that virtual hearing cannot be a norm, as it was adopted to meet the extraordinary crisis created by the COVID pandemic. The Court also commented that it is one thing to say that the public has right to witness the court hearings through live stream and another thing to say that they should have the right to have "virtual hearings".

A Bench of Justice L.Nageshwara Rao and B.R.Gavai was hearing a writ petition which sought for the retention of the hybrid options for physical and virtual hearings in courts saying that it enhanced the right to access justice. The writ petition seeking "virtual hearing" as a fundamental right was jointly filed by ex-IPS officer Julio Ribeiro, RTI activist Shailesh R. Gandhi and an organization named "National Federation of Societies for Fast Justice".

4. Reservation In Promotions : Should Adequacy Of Representation Be Proportionate To Population?Supreme Court Discusses

5. 'Can The State Police Continue Once NIA Investigation Ordered By Central Govt? Are All UAPA Offences To Be Tried Exclusively By NIA Courts?' Supreme Court Reserves Judgment

The Supreme Court on Tuesday examined the contours of the phrase 'till the Agency (NIA) takes up the investigation of the case' in Section 6(7) of the NIA Act to ascertain till when the state investigation agency has the competence to continue the investigation after the central government has directed the NIA to investigate a scheduled offence.

The Supreme Court issued contempt notice to the office bearers of the Bar Association of the Rajasthan High Court at Jaipur for boycotting a bench of the High Court as part of strike.

A bench comprising Justices MR Shah and AS Bopanna noted that despite repeated judgments of the Supreme Court which prohibit court boycotts and deprecated lawyers strikes, the Jaipur HC Bar Association went on a strike on September 27.

The Supreme Court registered a suo motu case on the issue of long pendency of criminal appeals in the Allahabad High Court. The Court is considering laying down of guidelines regarding grant of bail to convicts who have undergone long years of sentence due to delay in hearing of their criminal appeals.

A bench comprising Justices Sanjay Kishan Kaul and MM Sundresh ordered the registration of the suo motu case, after noting that the suggestions given by the Allahabad High Court in its affidavit are "cumbersome".