Supreme Court Weekly Round Up, September 27 To October 3 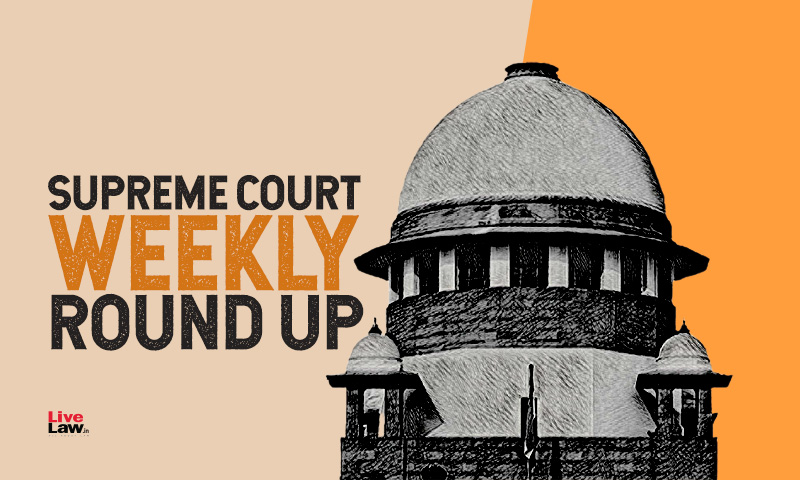 JUDGMENTS THIS WEEK1. Motor Accidents Claim - Minimum Wage Notification Not An Absolute Yardstick To Fix Income Of Deceased In Absence Of Salary Certificate : Supreme CourtCase Title : Chandra @ Chanda versus Mukesh Kumar Yadav and othersCitation : LL 2021 SC 532While deciding on compensation to be paid in a case of motor vehicle accident, Supreme Court has observed that merely because...

Case Title : Chandra @ Chanda versus Mukesh Kumar Yadav and others

While deciding on compensation to be paid in a case of motor vehicle accident, Supreme Court has observed that merely because claimants were unable to produce documentary evidence to show the monthly income of the deceased, the same does not justify adoption of lowest tier of minimum wage while computing the income.

"In absence of salary certificate the minimum wage notification can be a yardstick but at the same time cannot be an absolute one to fix the income of the deceased. In absence of documentary evidence on record some amount of guesswork is required to be done. But at the same time the guesswork for assessing the income of the deceased should not be totally detached from reality", the Court observed in the case Chandra @ Chanda versus Mukesh Kumar Yadav and others.

2. Chairman, Directors & Officers Can't Be Summoned In Criminal Complaint Against Company Without Specific Allegations About Their Individual Role : Supreme Court

The Supreme Court has reiterated that Chairman, Managing Director/Executive Director etc., of a company cannot be summoned in a criminal case if specific allegations about their particular role is not alleged in the complaint, as they cannot be vicariously held liable for the criminal acts of the company.

"Merely because they are Chairman, Managing Director/Executive Director and/or Deputy General Manager and/or Planner/Supervisor of A1 & A6, without any specific role attributed and the role played by them in their capacity, they cannot be arrayed as an accused, more particularly they cannot be held vicariously liable for the offences committed by A1 & A6", the Supreme Court observed in the case Ravindranatha Bajpe VS Mangalore Special Economic Zone Ltd and others.

The Supreme Court has held that a family settlement document which merely sets out the existing arrangement and past transaction will not be compulsorily registrable under Section 17(1)(b) of the Registration Act, 1908, if it doesn't by itself creates, declares, limits or extinguishes rights in the immovable properties.

"If we apply the test as to whether the Khararunama in this case by itself 'affects', i.e., by itself creates, declares, limits or extinguishes rights in the immovable properties in question or whether it merely refers to what the appellants alleged were past transactions which have been entered into by the parties, then, going by the words used in the document, they indicate that the words are intended to refer to the arrangements allegedly which the parties made in the past. The document does not purport to by itself create, declare, assign, extinguish or limit right in properties. Thus, the Khararunama may not attract Section 49(1)(a) of the Registration Act," a bench of Justices KM Joseph and SR Bhat remarked in the case Korukonda Chalapathi Rao & Ors v Korukonda Annapurna Sampath Kumar

4. Section 92 Evidence Act - Oral Evidence Admissible Only To Show That The Document Is Sham: Supreme Court

The Supreme Court has observed that Section 92 of the Indian Evidence Act bars giving of oral evidence on a written document except to prove that the document reflects a sham transaction.

"...the oral evidence of a written agreement is excluded except when it is sought to be alleged the document as a sham transaction", a bench comprising Justices Hemant Gupta and V Ramasubramanian observed in the case Placido Francisco Pinto (D) by LRs & Anr vs Jose Francisco Pinto & Anr.

The Court observed that oral evidence is admissible under Section 92 of the Indian Evidence Act to show that the document is a sham deed.

The Supreme Court has observed that forcing an unwilling party to undergo DNA test impinges on personal liberty and right to privacy.

"When the plaintiff is unwilling to subject himself to the DNA test, forcing him to undergo one would impinge on his personal liberty and his right to privacy", observed a bench comprising Justices R Subhash Reddy and Hrishikesh Roy.

"In circumstances where other evidence is available to prove or dispute the relationship, the court should ordinarily refrain from ordering blood tests. This is because such tests impinge upon the right of privacy of an individual and could also have major societal repercussions", the judgment added.

6. Financial Creditor Has To Prove That Application Filed U/s 7 IBC Is Not Barred By Limitation; But Materials Produced By Corporate Debtor Can Be Examined: Supreme Court

The Supreme Court observed that adjudicating authority can examine the material placed on record by the corporate debtor to determine whether an application filed by financial creditor is not beyond the period of limitation.

The court clarified that the burden of prima facie proving occurrence of the default and that the application filed under Section 7 of the Insolvency and Bankruptcy Code is within the period of limitation, is entirely on the financial creditor.

7. Insurance Claim Can Be Rejected If Vehicle Was Used Without Valid Registration: Supreme Court

The Supreme Court observed that an insurance claim can be rejected if a vehicle is used/driven without a valid registration, since that would constitute a fundamental breach of the terms and conditions of the contract of insurance.

The bench of Justices Uday Umesh Lalit, S. Ravindra Bhat and Bela M. Trivedi observed that when an insurable incident that potentially results in liability occurs, there should be no fundamental breach of the conditions contained in the contract of insurance. If on the date of theft, the vehicle had been driven/used without a valid registration, it amounts to fundamental breach, the court held.

The Supreme Court set aside an interim order passed by the Madras High Court in a writ petition filed by some broadcasters/FM Radios challenging Rule 29(4) of Copyright Rules, 2013.

"Craftsmanship on the judicial side cannot transgress into the legislative domain by re-writing the words of a statute. For then, the judicial craft enters the forbidden domain of a legislative draft.", the bench of Justice DY Chandrachud and BV Nagarathna observed in the case Saregama India Limited vs. Next Radio Limited & Ors.

The Supreme Court this week directed that there shall be no immediate release until the next date of hearing of the women officers of the Indian army who have moved the Court claiming that they have been denied Permanent Commission in violation of the March judgment of the Court.

The bench of Justices D. Y. Chandrachud and B. V. Nagarathna acceded to the request of the Centre for a short adjournment to consider the grounds for rejection of PC of each of the petitioners following the judgment of the Court and directed it to file by October 8 an affidavit explaining the position.

The Supreme Court issued notice on a writ petition seeking directions to the Centre to not insist on the production of Aadhaar card as the only proof of identification for the purpose of administering Covid-19 vaccination.

At the outset, Justice D. Y. Chandrachud observed, "Don't go by newspaper articles. Have you seen the COWIN App yourself recently? It has now been updated. Go to the FAQ section and you will see that there are now a variety of ID proofs with which you can register"

"Aadhaar card is not the only ID which they are accepting. You can also register with a Drivers' license, PAN card, Voter's ID, passport, ration card etc. We will keep back this matter, and you go and verify for yourself", the judge told the advocate for the petitioner.

3. 'You Have Strangulated The Entire City, Now You Want To Come Inside?' : Supreme Court On Farmers Group's Plea For Permission For Satyagraha At Jantar

If the farmers groups have already approached the Courts challenging the controversial farm laws, what is the point in continuing with the protests against the laws, asked the Supreme Court.

A bench led by Justice AM Khanwilkar posed this query orally to farmers group "Kisan Mahapanchayat" which has approached the Court seeking permission to hold satyagraha at Jantar Mantar in the national capital.

The judge also made critical remarks against the road blockade held by protesting farmers at Delhi-NCR border as part of the protest.

4. 'The Offence of Sexual Assault Under S.7 of POCSO Requires Skin-To-Skin Contact': Argues Senior Advocate Siddharth Luthra For The Accused

The Supreme Court Bench of Justices U.U.Lalit, Ravindra Bhat and Bela Trivedi has on Thursday continued the hearing in SLP filed by ASG K.K.Venugopal against the acquittal of an accused in terms of Bombay High Court judgment which held that skin to skin contact is necessary to constitute sexual assault under S.8 of the POCSO Act.

5. 'We Cannot Allow People To Suffer And Die. There Are Children, People Suffering From Asthma' : Supreme Court To Firecracker Manufacturers

The Supreme Court admonished top six firecracker manufacturers in the country for the use of barium salts in fireworks in 'flagrant violation' of the Court's earlier orders. The Court was hearing an application alleging violation of the order dated February 10, 2017 banning the use of certain chemicals that were dangerous & beyond safety limits in the fireworks by the manufacturers.

A Bench comprising Justices MR Shah and AS Bopanna on Wednesday took on record the preliminary inquiry report submitted by the Joint Director, Central Bureau of Investigation (CBI) at Chennai pursuant to the Court's earlier directions vide order dated March 3, 2020.

The Supreme Court issued notice in petition filed by the State of West Bengal challenging the Calcutta high Court's direction for CBI investigation into cases of murder, rape and crimes against women which allegedly took place during the post-poll violence in West Bengal.

A bench comprising Justices Vineet Saran and Aniruddha Bose observed that the State of West Bengal through its counsel Senior Advocate Kapil Sibal has made out a prima facie case for issuance of notice.

7. Supreme Court Directs Centre To Issue Instructions To Implement Reservation In Promotions For Persons With Disabilities Within 4 Months

The Supreme Court directed the Union of India to issue instructions "at the earliest and not later than four months", in accordance with the proviso to Section 34 of the Right of Persons with Disabilities Act, 2016 for giving reservation in promotions to persons with disabilities.

The said proviso reads as "Provided that the reservation in promotion shall be in accordance with such instructions as are issued by the appropriate Government from time to time".