'In All Fairness, We Expect You To Wait' : Supreme Court To West Bengal Govt On Judicial Probe Ordered Into Pegasus Issue 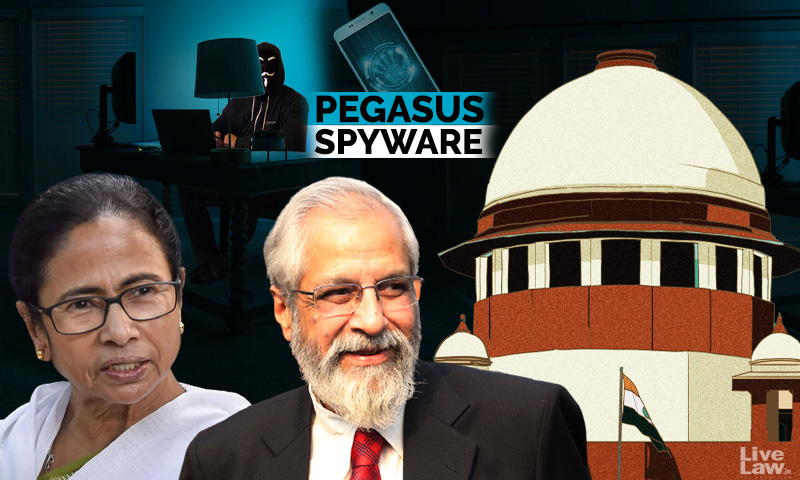 The Supreme Court on Wednesday observed that it expected the West Bengal Government to 'show restraint' and wait before proceeding with the judicial enquiry ordered by it into the Pegasus issue, when the Court is considering the matter.However, the Court refrained from passing any order to stay the functioning of the judicial commission constituted by the West Bengal Government, after...

The Supreme Court on Wednesday observed that it expected the West Bengal Government to 'show restraint' and wait before proceeding with the judicial enquiry ordered by it into the Pegasus issue, when the Court is considering the matter.

However, the Court refrained from passing any order to stay the functioning of the judicial commission constituted by the West Bengal Government, after Senior Advocate Dr. Abhishek Manu Singhvi made an oral assurance that he will convey the message of the Court to the State Government.

The bench comprising Chief Justice of India NV Ramana and Justice Surya Kant tagged the petition challenging the West Bengal Government notifications along with the other petitions on Pegasus issue, which are likely to be posted next week.

The bench was hearing a PIL filed by an NGO named "Global Village Foundation" challenging the notification issued by West Bengal Government constituting an Enquiry Commission headed by former Supreme Court judge Justice Madan B Lokur to investigate into the allegations pertaining to the Pegasus spyware scandal.

Senior Advocate Harish Salve, appearing for the petitioner, submitted that there cannot be a "parallel inquiry" when the Supreme Court is considering the matter. He argued that the notification was beyond the competence of the State Government as issues relating to the Information Technology Act fell within the domain of the Union Government.

"Please see nothing is done in the proceedings there while the court is hearing the matter. They have issued notices to public seeking information", Salve submitted.

When Senior Advocate AM Singhvi objected to Salve's submissions, the CJI told him, "When we are hearing other matters, we expect some restraint. The present issue is connected to other issues. It will have a bearing on it. In all fairness, we expect you to wait".

"This is likely to have pan India impact", Justice Surya Kant added.

When Dr.Singhvi urged the bench to not pass any order, the CJI responded, "Mr. Singhvi, you don't listen to us. We are saying that next week we will hear. We will pass a comprehensive order. In the meantime, if you start an enquiry, we will have to pass an order".

Dr.Singhvi questioned the locus of the petitioner and alleged that it has political affiliations. He argued that the Court should not pass a statutory notification at the instance of an NGO whose motives were not clear.

"Between now and next week nothing earth shattering is going to happen. Any word from your lordships will create a splash", Singhvi submitted.

"You're forcing us to pass order. What we want is wait, show constraint", the CJI said.

At this point, Singhvi agreed to convey the message to the State Government and requested the bench to say nothing in the order.

"We just want an assurance from the State. If a senior counsel has assured before this Court, that is enough for us, Salve submitted.

At the end, the bench passed a simple order of issuing notice in the petition and tagging it along with the other Pegasus matters.

In a related development, the State of West Bengal filed its counter-affidavit in the matter today, saying that it was constrained to constitute the commission due to the inaction of the Central Government in the Pegasus issue.

Background:
On July 26, West Bengal Government constituted an Inquiry Commission headed by former Supreme Court judge Justice Madan B. Lokur and former Chief Justice of the Calcutta High Court Justice Jyotirmay Bhattacharya to investigate into the allegations pertaining to the Pegasus spyware scandal. A notification to this effect was issued on Monday by B.P Gopalika, Additional Chief Secretary, Government of West Bengal.

The development had come days after it was revealed that the Chief Minister's nephew and TMC MP Abhishek Banerjee was allegedly snooped on by the Pegasus spyware during the time of the West Bengal Assembly elections 2021.

The notification also expressed concerns regarding the alleged interference with the rights of journalists to discuss and report sensitive information and exercise their freedom of speech and expression. It was also opined that the alleged interception, if found to be true, would cause a complete demoralisation of the police force and other security services in West Bengal.

Some of the functions of the constituted Inquiry Commission are as follows:

News portal "The Wire" along with 16 other media organisations had recently uncovered a 'snoop list' that showed that activists, politicians, journalists, judges and several others were the potential targets of cyber-surveillance conducted through the Israeli firm NSO Group's Pegasus software. Over the past few days, The Wire has published several reports that suggest that the Pegasus spyware has been used illegally to keep tabs on dissidents and journalists.

Several petitions have already been filed before the Top Court seeking court-monitored inquiry by a Special Investigation Team or a judicial probe into reports of alleged snooping of activists, politicians, journalists and constitutional bodies using the Pegasus spyware

Supreme Court had on August 17th issued notice before admission to the Central Government in a batch of petitions seeking probe into the Pegasus snooping controversy.