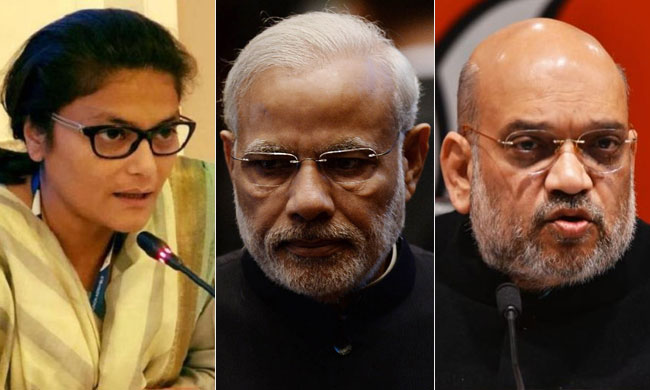 The Supreme Court today said that it cannot examine the merits of the orders passed by the Election Commission of India giving clean chits to Prime Minister Narendra Modi and BJP President Amit Shah in the petition filed by Congress MP Sushmita Dev.

This is because the petition filed by Dev was against the inaction of the ECI in dealing with the complaints of alleged violations of Model Code of Conduct by Modi and Shah in their election speeches; since the poll panel has disposed of all the pending complaints against Modii and Shah, the merits of the orders can be challenged only in an independent petition, said the CJI-led bench.

Dev's counsel Dr.Abhishek Manu Singhvi also raised the issue of Narendra Modi terming late Rajiv Gandhi "brashtachari no.1" in an election speech. However, the Court was not inclined to examine this complaint, and said that the scope of the petition cannot be expanded.

"The petition has become infructuous as the ECI has taken decision on the complaints", remarked the CJI.

Last week, the SC had directed the poll body to take decision on all pending complaints by May 6, while considering Dev's petition who said that they have given 11 representations to the EC against the duo but it has taken decision on only two.

Before the expiry of the deadline set by the Supreme Court, the Election Commission of India  disposed of all complaints against Prime Minister Narendra Modi and BJP President Amit Shah alleging model code of conduct violations, giving clean chits to the duo.

Yesterday, the Congress law maker from Silchar had filed an additional affidavit alleging that ECI had not applied it mind properly in the complaints, and that the orders were passed belatedly in order to give undue edge to the ruling party.

The ECI is also adopting double standards, as it has acted against similar comments made by other leaders, while letting off Modi and Shah, she added.

On Saturday, the EC gave Modi clean chit in a complaint regarding mentioning of Wing Commander's Abhinandan's return in connection with election campaigning.

Last month, the Commission had issued an advisory against using photos and functions of armed forces in election campaigning.

Amit Shah's comments, also on Wayanad, where in a speech in Nagpur, he said "Rahul Gandhi is contesting in such a place where it is impossible to say when a procession is taken out, whether it is a procession in India or Pakistan", were also not found objectionable by the ECI.

The poll panel has also clean chit to PM Modi for two of his speeches -- one in Latur last month urging first time voters to dedicate their votes in the name of Balakot air strike heroes and soldiers killed in the Pulwama attack, and the other in Wardha on April 1, slamming Congress chief Rahul Gandhi where he had also indicated that the Kerala constituency had more voters from the minority community.

On May 2, the Commission disposed of another complaint against Modi, finding no violation of the Model Code of Conduct (MCC) by him in his speech in Barmer in Rajasthan where he had warned Pakistan, saying India's nuclear arsenal is not meant for Diwali. "Every other day they used to say 'we have nuclear button, we have nuclear button'. What do we have then? Have we kept it for Diwali?" he had said.