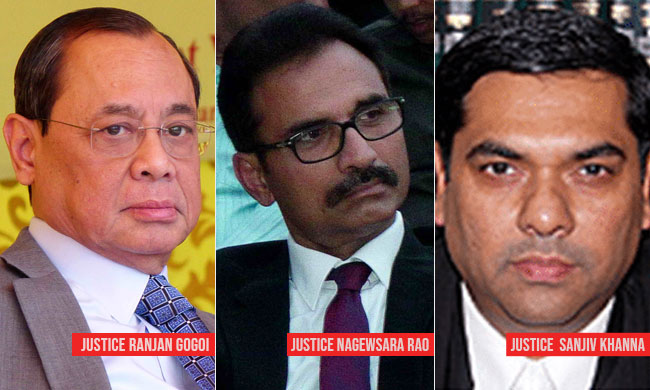 The Supreme Court recently upheld the Madras High Court ruling that irrespective of the nature of the offence committed, if a prisoner is a life convict, he will be eligible as per the Tamil Nadu Prison Rules, 1983, for consideration for premature release on his completing 14 years of actual imprisonment. However, the bench comprising CJI Ranjan Gogoi, Justice L Nageswara Rao and...

The Supreme Court recently upheld the Madras High Court ruling that irrespective of the nature of the offence committed, if a prisoner is a life convict, he will be eligible as per the Tamil Nadu Prison Rules, 1983, for consideration for premature release on his completing 14 years of actual imprisonment.

However, the bench comprising CJI Ranjan Gogoi, Justice L Nageswara Rao and Justice Sanjiv Khanna set aside the High court's general direction to review claims of premature release of all life convicts who have completed 14 years of custody and whose claims were rejected on the basis of erroneous understanding of the provisions of the Prison Rules.

P.Veera Bharathi's claim for premature release was rejected on the ground that he was convicted for offence under Section 376 of the Indian Penal Code and sentenced to undergo rigorous imprisonment for seven years for the said offence and thus he was not eligible for placing his case before the Advisory Board, as per Rule 341(3) of the Rules for consideration.

The state had interpreted the rules to mean that, all the prisoners, who have been sentenced to undergo imprisonment for more than three years other than imprisonment for life, for the offences mentioned therein shall not be eligible for premature release under the Advisory Board Scheme, i.e., Prisoners convicted of rape, forgery, dacoity, terrorist crimes, offences against the State and prisoners sentenced under Sections 224, 376, 396 to 400, 402, 467, 471, 472, 474, 489-A, 489-B, and 489-D of the Indian Penal Code" are not eligible for premature release.

The Madras High Court, while allowing Veera Bharathi's plea, held that irrespective of the nature of the offence committed, if he is a life convict, he will be eligible for consideration for premature release on his completing 14 years of actual imprisonment.

The High Court then directed the state to consider the claim of Veera Bharathi for premature release. It also directed the state to review all the cases of the life convicts, who have completed 14 years of imprisonment lodged in various prisons in the State, where their claims for premature release have been rejected placing reliance erroneously on the proviso to Sub-Rule 3 of Rule 341 of the Rules.

The High Court had justified the direction observing thus: "Many of the prisoners, due to ignorance of law or out of lack of wherewithal and help, without approaching this Court for relief, are languishing in various prisons in the State. Though they have not approached this Court, on that score alone, we cannot deny justice to them, as poverty and ignorance cannot stand in the way of a person securing his right, such as, liberty, which is a fundamental right guaranteed under the Constitution."

Assailing the High Court verdict, the state contended before the Apex court that, if a person is to be convicted and sentenced under an ineligible Section/ineligible offence he would not be entitled to the benefit of early/premature release under the Prison Rules.

Agreeing with the High court view, the bench said that such an interpretation of the rule would create a highly incongruous situation which the rule making authority could not have been understood to have contemplated or envisaged.

It explained: "Higher offences involving sentence of imprisonment for life or even death sentence commuted to life imprisonment, if not coupled with convictions under the ineligible section(s), would entitle a convict to consideration of his case for early release. But, if a lifer is to be convicted for a much lesser offence, say, offences under Section 224, 498A IPC, etc. and sentenced to small periods of imprisonment, notwithstanding the fact that he had completed more than 10 years of custody, he would still not be eligible for early release. Such a situation, in our considered view, cannot be allowed to prevail by understanding the operation of the Rules in the manner suggested on behalf of the appellants."

However, the bench set aside the High Court direction to review cases of all life convicts, on the ground that it was not was justified in extending the directions beyond the parties to the proceedings before it.