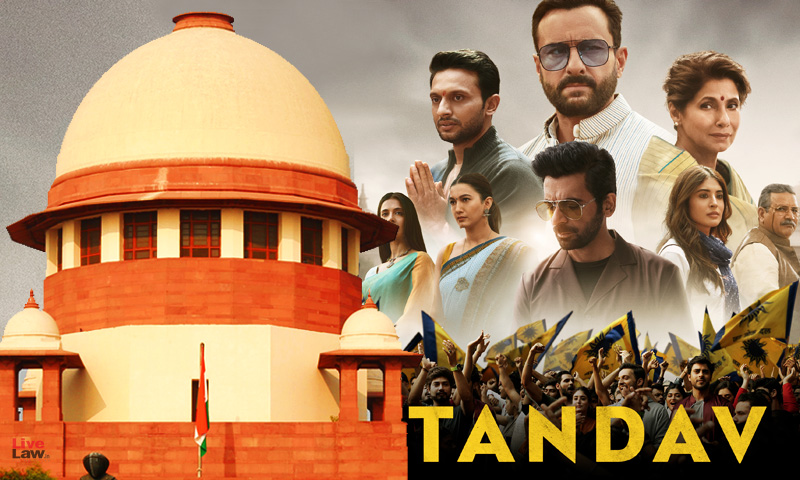 The Supreme Court on Wednesday issued notices on a plea filed by the Director, Producer, Writer and Actor of the web series Tandav seeking for clubbing and transferring of criminal proceedings which have been initiated against them in various cities for allegedly hurting religious sentiments. A Bench comprising of Justices Ashok Bhushan, R. Subhash Reddy and MR Shah refused to grant...

The Supreme Court on Wednesday issued notices on a plea filed by the Director, Producer, Writer and Actor of the web series Tandav seeking for clubbing and transferring of criminal proceedings which have been initiated against them in various cities for allegedly hurting religious sentiments.

"We cannot use the power under Section 482 CrPC. We are not inclined to grant interim protection," the Bench said. The bench also said that it was rejecting the prayer for quashing of the FIRs.

It however clarified that the pendency of the petition in the Supreme Court will not prejudice the right of petitioners to seek appropriate remedies from concerned courts for bail or quashing of FIRs.

The petitioners' lawyers persuaded the bench for interim protection by referring to similar orders granted in 'Arnab Goswami' & 'Amish Devgan' cases. They submitted that refusal of interim protection will lead to "havoc", as the petitioners will have to file bail applications in different districts in different states. However, the bench was not inclined to grant the prayer. The bench also orally remarked during hearing that religious sentiments cannot be hurt.


Plea for interim protection from arrest

The Petitioners' Advocates insisted that they be granted interim protection from arrest. "We also need protection. We will be arrested by six different state polices," Rohtagi submitted.

He referred to Arnab Goswami's case where a Division bench of the Supreme Court granted interim protection during hearing of the matter.

Senior Advocate Sidharth Luthra submitted that in the Amish Devgan case, though FIRs were refused to be quashed, the Court allowed the continuation of interim protection from arrest. It also permitted clubbing of FIRs and transferred the case to Ajmer.

[Note: As many as 7 FIRs were filed in Rajasthan, Madhya Pradesh, Uttar Pradesh, Maharashtra & Telangana against Devgan on the basis of alleged derogatory remarks that he made against Sufi Saint Moinnuddin Chisti on his prime time show, telecast on June 15, 2020.]

Nothing survives in complaints as objectionable content is removed

Senior Advocates Fali Nariman and Mukul Rohatgi submitted that nothing survives in the matter as the objectionable parts of the series, that hurt the "so-called religious sentiments" of people, had been removed.

He submitted that the Petitioners were being harassed by filing of FIRs/petitions in different states and urged that the Top Court protect their fundamental right to freedom of speech and expression.

On being inquired as to why they had not approached the High Court first, Narmian submitted,

"FIRs are filed in 6 states. And it's increasing everyday. There's some sort of concert in this and we want to avoid it. Now we have 7 in the last 5 days."

Why not approach the High Court?

Nariman insisted that the question involved herein pertains to rights under Article 19(1)(a) of the Constitution, that was protected even in Arnab Goswami's case, without relegating him to the High Court. He submitted,

"People are now offended by everything ! The Petitioners reside in Bombay. Why will they go to different States. In Arnab Goswami, your Lordships stated that violation of 19(1)(a) could allow us to approach SC."

Progressing this argument, Rohtagi urged the Top Court to at least club all the FIR together so that the Petitioners do not have to defend themselves in different High Courts. He referred to the MF Husaain's case where a similar relief was granted.

"Even though we admit that we have not done anything wrong. It is a political satire. If people are so sensitive in everything, then art, cinema, TV, all will be destroyed.

Article 19(1)(a) is the most jealously guarded right. It must be protected. This was also held in Arnab Goswami.

This is a genuine innocent case. We have done no wrong. Every day there is a new FIR. Where will a man go? Can he go to every state and argue? Your lordships may at least club the FIRs."

Luthra also submitted that even though the right to freedom of speech and expression is not absolute, the Petitioners should not be subjected to this kind of harassment.

"Look at the FIR. Look at the kind of language. Is this the kind of FIRs that can be registered in this country?. Learned senior (Rohatgi) has said the same. We cannot be dragged from state to state," Luthra argued.

He referred to the Supreme Court's verdict in Narayanan Rajendran & Anr. v. Lekshmy Sarojini & Ors. and in TT Antony v. State of Kerala & Ors., to state that there cannot be more than one FIR if the 'substratum of allegations' is same. 'This is persecution not prosecution', he added.

In TT Anthony case, the Top Court had held, "It is quite possible and it happens not infrequently that more informations than one are given to a police officer in charge of a police station in respect of the same incident involving one or more than one cognizable offences. In such a case he need not enter every one of them in the station house diary and this is implied in Section 154 of Cr.P.C."

In this backdrop, Luthra contended that even assuming that the FIRs are legitimate, as per principles in TT Antony Case, registration of multiple FIRs on same cause of action is impermissible.

No offence made out

Luthra also contended that Sections 66/67 (Publishing of obscene content in electronic form) of IT Act and Section 153A IPC (Promoting enmity between different groups) are not attracted in the case. He submitted,

"The series is an analytical series about political issues, social issues. Even though there was no objectionable content, we removed them after complaints. People when they see the series on the OTT platform, they consent to see it."

Appearing for actor Mohammed Zeeshan Ayyub, Advocate Siddharth Agarwal argued that views of a character depicted in the series cannot be ascribed to the actor's personal views/ beliefs. The Bench however did not seem inclined to entertain this aspect in an Article 32 petition.

"You cannot play a role hurting religious sentiments of others", Justice MR Shah told the counsel.

Justice Ashok Bhushan also remarked during the hearing that freedom of speech was not absolute.

Filed by Director Ali Abbas Zafar, Producer Himanshu Mehra, Writer Gaurav Solanki, Actor Mohammed Zeeshan Ayyub and Amazon India Originals Head Aparna Purohit, the plea, apart from praying for the quashing of the proceedings, also seeks for the multiple FIRs that have been filed against them to be clubbed and transferred to a single police station.

The three-week anticipatory transit bail was granted by Justice PD Naik days after the Hazratganj Police in UP booked under several sections of the Indian Penal Code and Information Technology Act for allegedly portraying Hindu gods in a bad light in the web series 'Tandav', which released on streaming platform Amazon Prime.

In fact the UP Police had reached Mumbai to investigate the case. Senior advocate Aabad Ponda and Advocate Aniket Nikam have argued that their clients were wrongfully implicated in the present FIR without any role being assigned to them independently and therefore they should be granted four weeks of transit pre-arrest bail.

Senior official of Amazon was represented by Mr. Fali Nariman and Mr. Mukul Rohatgi, Senior Advocates and briefed by a team comprising of Sai Krishna