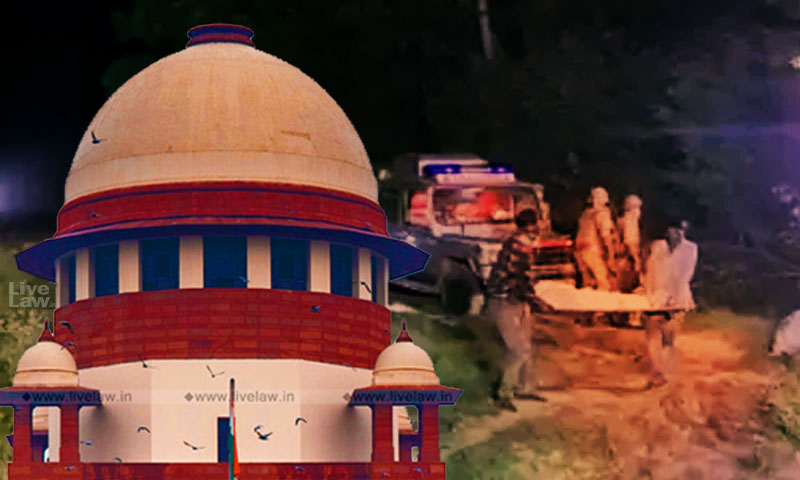 Teesta Setalvad's Citizens for Justice and Peace, has moved the Supreme Court seeking intervention in the PIL for SIT/ CBI investigation into the Hathras case. The organization has submitted that it has experience in working with the victims who were threatened and intimidated by the State in the past, and therefore it is in a position to assist the Court. It has urged the Court...

Teesta Setalvad's Citizens for Justice and Peace, has moved the Supreme Court seeking intervention in the PIL for SIT/ CBI investigation into the Hathras case.

The organization has submitted that it has experience in working with the victims who were threatened and intimidated by the State in the past, and therefore it is in a position to assist the Court.

It has urged the Court to consider the following aspects of the matter:

It is highlighted that cases of intimidating a victim's family are on a rise and even though it is claimed that protection has been grated to the Hathras victim's family, the Court should ensure that "the personnel who do protect family, including women also hail from similar strata, to avoid further alienation and intimidation."

"This would not threaten the existence of a fair trial where witness from marginalised backgrounds can fearlessly come forward and testify in courts….lack of effective witness protection right from the beginning of investigation and trial hampers deliverance if justice and results in many cases, in witness turning hostile."

The organization has pointed out that that when it comes to offences against Dalits, legal recourse should be had to the SC/ST Act of 1989. Under sub-section 11(d) of Section 15A of the Act, it is submitted, a State is bound to "provide relief in respect of death"

Additionally, it is submitted, the provisions of IPC under Section 279 that makes trespassing cremation/ burial grounds or offering indignity to human corpse or disturbing funeral ceremonies, punishable.

The organization further sees an investigation into the "line of command" as to who ordered the Police to do the victim's cremation.

"Mere suspension of the officers at the threshold will not really address the problem. It is extremely clear from the manner in which an entire police force as well as the District Administration was present, intimidating/ persuading the family, preventing them from being present at the funeral, systematically preventing the media, that there would be clear instructions from a higher level for the same," it submitted.

The organization has submitted that subjecting the family members of the victim (as ordered by the UP Govt) when they are neither accused nor booked under any charges in matter "is a great defiance of law".

It is submitted that in Selvi v. Stat of Karnataka, the Supreme Court had held that "no individual should be forcibly subjected to any of the techniques in question, whether in the context of investigation in criminal cases or otherwise. Doing so would amount to an unwarranted intrusion into personal liberty."

Narco Analysis Test Cannot Be Forcibly Conducted On An Individual: SC Held in Selvi vs. State Of Karnataka (2010)

Referring to the UP DGP's statement that forensic report of the victim does not establish a case of rape, the organization pointed out,

It is also pointed out that on September 22, the victim informed the doctors that she was raped. However, her medical examination was conducted only on September 25, which 11 days after the fateful incident.

"There are some serious questions being raised whether police who admitted the victim had anything to do with the missing "sexual assault" mention at the time of admission and the claim of assailants being unidentified."

They have sought for leave to rely upon the transcript of the videos where victim can be seen and heard speaking about the incident.

It is submitted that the Hathras victim gave a dying declaration to the Magistrate on September 22, 2020 and as per law,

"where there are no material contradictions, the dying declarations can be completely relied upon without corroboration. A dying declaration need not be spoken in words or in writing, it can be a mere nod or even a gesture. In this case, if reports of her dying declaration are to be believed, of which this court will soon get apprised, she has mentioned the name of accused as well as made mention that the men raped her."

Reliance is placed on Section 32(1) of the Indian Evidence Act, 1872 and the Supreme Court's verdict in PV Radhakrishna v. State of Karnataka where the legal maxim nemo moriturus praesumitur inentire was emphasized, which means— a man will not meet his maker with a lie in his mouth.

Relevance of forensic reports and other medical evidence in rape cases

Significantly, the allegations of rape have been discounted by the UP Govt on two frounds:

In this backdrop it is submitted,

"reliability of the FSL report is debatable as the sperm was collected 11 days after the sexual assault" whereas the likelihood of identifying spermatozoa is only for 72 hours after assault.

Hence it is argued that reliance must be placed on the vcitim's statement and other physical evidences.

It may be noted that the matter was heard by the Supreme Court yesterday, where the Top Court directed the State of Uttar Pradesh to file an affidavit stipulating Witness Protection Plan for the family and witnesses of the 19-year old woman.