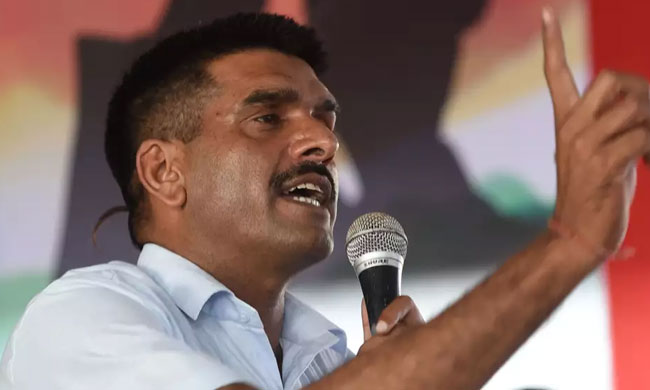 Supreme Court has dismissed the petition filed by former BSF jawan Tej Bahadur Yadav against the dismissal of his nomination from Varanasi Loksabha constituency. "We don't find any merit to entertain this petition", said the bench headed by Chief Justice GogoiYadav, who was dismissed from Border Security Force in 2017 for allegedly making false complaints about food quality, had filed...

Supreme Court has dismissed the petition filed by former BSF jawan Tej Bahadur Yadav against the dismissal of his nomination from Varanasi Loksabha constituency.

"We don't find any merit to entertain this petition", said the bench headed by Chief Justice Gogoi

Yadav, who was dismissed from Border Security Force in 2017 for allegedly making false complaints about food quality, had filed his papers on April 29 as a candidate of the Samajwadi Party.

This was rejected by the Returning Officer on May 1 on the ground that the he was dismissed from the government service on April 19, 2017 and five years period from the date of such dismissal has not elapsed, in terms of section 9 of the Representation of the People Act 1951.

The Returning Officer also observed that "the nomination paper is neither accompanied by certificate issued in the prescribed manner by the Election Commission to the effect that he has not been dismissed for corruption or disloyalty to the state".

In 2017, Yadav had uploaded a video in social media where he complained that poor quality food was being served to personnels guarding the Indo-Pak border. This led to a huge furore and a court martial enquiry was held against him, which culminated in his dismissal on grounds of making false complaints in media. Yadav had initially announced that he will take on Prime Minister Narendra Modi in Varanasi as an independent candidate. Later, Samajwadi Party announced its support to him and fielded him as its candidate.

In the petition filed under Article 32 of the Constitution of India, Yadav asserts that he had produced his dismissal order along with the nomination paper, which showed that he was dismissed for alleged indiscipline and not for corruption or disloyalty to state. Therefore, he argues that his case is not covered by Section 9 of the 1951 Act and hence certificate by the Election Commission under section 33 (3) of the Act of 1951 is not required.

Also, he complains that sufficient time was not afforded to him for producing the certificate, as the show cause notice issued on April 30 at 6 PM required him to submit the certificate by 11 AM next day.

Without applying its mind on the argument raised him that the disability under the Act was not applicable to him, the nomination was rejected, Yadav contends in the petition, which is filed through Advocate Prashant Bhushan.

"It seems the impugned decision has been taken keeping in mind the sensitivity of the contest in Varanasi Constituency and to give walkover to the candidate of the ruling party by disqualifying the Petitioner whose candidature was gaining momentum and was therefore also supported by the main opposition alliance of two major political parties in the state", the petition states, terming the rejection "arbitrary, erroneous and mala fide".

He said that he was approaching the SC directly "in view of the abject failure of the Election Commission in exercising its constitutional power to ensure free and fair election and also total arbitrariness and malafide of the Returning Officer in disqualifying the Petitioner from contesting the Lok Sabha election".