That Arnab Goswami Will Go Back To TV And Scream At Police Commissioner Can't Be A Ground To Keep Him In Custody : Salve In Bombay High Court 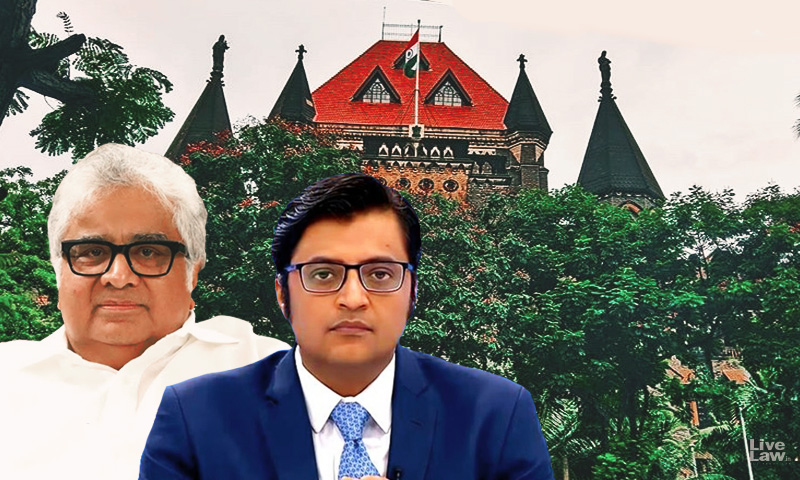 Senior Advocate Harish Salve on Friday made a fervent plea before the Bombay High Court for the interim release of Arnab Goswami from custody in the 2018 abetment to suicide case.After making elaborate legal arguments on why no prima facie case was made out against Goswami, Salve sought for interim release."What is the harm if this gentelman is released on bail?What is going to happen between...

Senior Advocate Harish Salve on Friday made a fervent plea before the Bombay High Court for the interim release of Arnab Goswami from custody in the 2018 abetment to suicide case.

After making elaborate legal arguments on why no prima facie case was made out against Goswami, Salve sought for interim release.

"What is the harm if this gentelman is released on bail?What is going to happen between now and after Diwali?", Salve submitted before a divsion bench comprising Justices S S Shinde and M S Karnik.

"The problem cannot be that he will go back to the TV channel and scream and will make allegations against Parambhir Singh(Mumbai Police Commissioner). He will certainly. But that it is no ground to keep him in custody", Salve continued.

Salve : There is a prima facie finding of the Magistrate before you that the arrest is illegal. The root is tainted with illegality. This should weigh with your lordships. The whole thing is mala fide.#ArnabGoswami #RepublicTV #BombayHC

The bench said that it cannot consider the prayer for interim release without hearing the State and the Complainant. Since there was paucity of time today, the bench has decided to hold a special sitting tomorrow at 12 PM.

During the course of hearing today, Senior Advocate Harish Salve, referred to the remand order passed by CJM Alibag, which he submitted, "makes important points about the illegality of arrest and the lack of merits in the allegations against Arnab Goswami".

He pointed out that the CJM had stated in his order that "it seems that the arrest of the accused (Arnab Goswami) is illegal."

He argued that a mere challenge to the said order does not matter as the CJM had passed the order after seeing the records and the case diary.

On merits, Salve argued that there was no personal relationship between Goswami and the deceased and they were merely involved in a commercial transaction.

"You have commercial disputes with different people for over two years. You don't file a suit. You have creditors beating at your door. You kill yourself. There cannot be FIR for abetment to suicide for this.

The conduct for abetment to suicide must be direct and proximate… The Magistrate had rightly accepted the closure report of the police in 2019," he argued.

Reliance was placed on the Supreme Court's judgment in M Arjunan v. State, where it was held that mere use of abusive words for not paying back money borrowed will not amount to abetment to suicide under Section 306 IPC.

"The intention of the accused to aid or instigate or abet the deceased to commit suicide is necessary for abetment to suicide offence," he submitted.

Salve also referred to Gurucharan Singh v. State of Punjab, where the Supreme Court had categorically held that without a positive act on the part of the accused to instigate or aid in committing suicide, conviction cannot be sustained.

"Merely on the allegation of harassment without there being any positive action proximate to the time of occurrence on the part of the accused which led or compelled the person to commit suicide, conviction in terms of Section 306 IPC is not sustainable," Salve quoted from the judgment.

State acting out of malice

Salve also argued against the remarks made by Maharashtra Home Minister Anil Deshmukh in the Assembly discussions about the journalism of Goswami, where he claimed that the suicide of Anvay Naik was due to the non-payment of dues by Goswami.

"The Home Minister said that necessary orders will be issued to the Police…Is the Minister above the judiciary to decide?," Salve remarked.

He contended that the State is acting out of malice and there is a clear pattern depicting the same. He submitted,

"HC has protected him (Goswami) from arrest in two FIRs. The TRP case came after that…

Today C S Vaidyanathan (Hansa) told the Court that they are being asked by Mumbai Police to frame Republic TV and Arnab Goswami."

Notably, the Supreme Court today issued contempt notice to Maharashtra Assembly Speaker for notice against Goswami and intimidating him for approaching the Court against the same.

"The Home Minister Anil Deshmukh had alleged in Assembly that Arnab Goswami was responsible for the suicide. This is where the entire case starts. He was also issued a privilege notice. The Supreme Court today issued contempt notice to Assembly Secretary for letter," Salve told the Bench.

Plea of Habeas Corpus against a Remand order

Referring to a judgment rendered by Justice AM Khanwilkar, when he was a Judge at the Bombay High Court, Justice Shinde told the Petitioners that a plea of habeas corpus does not lie against remand orders.

However, Salve told the Court that they were challenging the very legality of the FIR and arrest and hence, they had approached the High Court.

"Habeas may not lie technically. But we have challenged the entire FIR and the arrest," he submitted.

Power of a writ Court to grant Bail

Senior Advocate Harish Salve had insisted that there is no need to keep Goswami in custody and that the High Court even has the power to release him on bail under Article 226.

In this regard, Advocate Ponda referred to the Supreme Court's judgment in the Kartar Singh case to argue that the High Court has the power to directly consider bail. In that case, the Top Court had held that the High Court can grant bail even under Article 226 in exceptional circumstances, he submitted.

Reliance was also placed on the Asian Resurfacing case to argue that High Court has power to stay the investigation if it is malafide, illegal and causing prejudice to the liberties of an individual.

However Justice Shinde stated that as per allocation of work, bail is not for them to decide. He therefore suggested the Petitioner to move the bail application on administrative side for the Chief Justice to allot it to the Division Bench.

Goswami was arrested on Wednesday morning in a case registered by the Raigad Police in 2018 for allegedly abetting the suicide of a 52-year old interior designer named Anvay Naik and his mother Kumud Naik.

It is alleged that Anvay Naik left a suicide note written in English stating that he and his mother decided to take the extreme step on account of payments due to them not being cleared by the owners of three companies – television journalist Arnab Goswami of Republic TV, Feroz Shaikh of IcastX/Skimedia and Niteish Sarda of Smartworks.

Naik said in his suicide note that his company had executed interior works for Republic TV and an amount of Rs 83 lakh was due from Goswami and ARG Outlier Meida Pvt Ltd (parent company of Republic TV).

The Raigad police had closed the case in April 2019 saying that they did not find evidence against the accused named in the suicide note, including Goswami.

However, in May this year, Anvay's daughter approached the Maharashtra Home Minister Anil Deshmukh seeking the case be reopened.