This Govt. Uses Law To Defeat The Law Resulting In A State of Lawlessness: Senior Advocate Indira Jaising 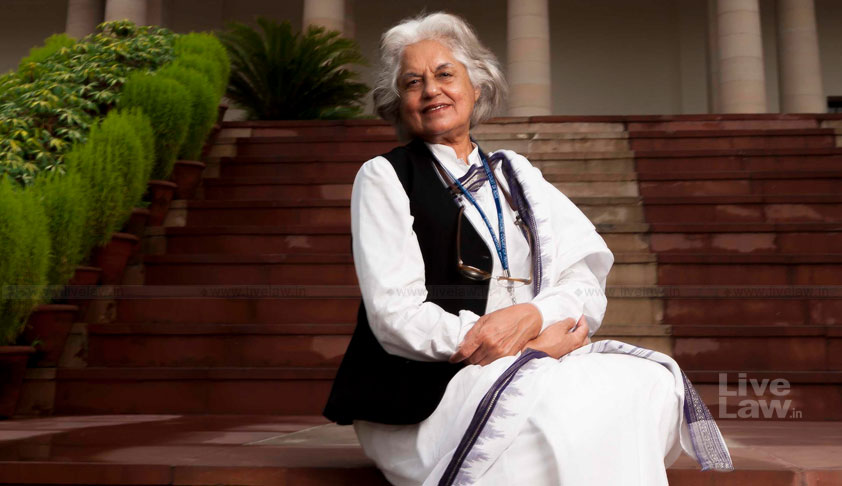 x
"The defining moment of the present situation is that this government uses law to defeat the law, resulting in a state of lawlessness. When a democracy fails, our courts also fail us", stated Ms Jaising.

"Once you are entitled to citizenship, you are entitled to the protection of all other rights which then accrue to you under the Constitution.Perhaps that is the rationale behind the CAA read with the NPR to deny to certain sections of people the right to citizenship and to empower others based on religion", expressed senior advocate Indira Jaising on Friday.She was speaking on...

She was speaking on 'Citizenship, Democracy and Rights' at the launch of the book 'Citizenship, Rights and Constitutional Limitations', authored by senior advocate Dr. K. S. Chauhan and published by Mohan Law House. The event was also attended by former Vice President of India Hamid Ansari.

"Given the history of partition in the country, citizenship is linked to the birth of an individual in the undivided territory of British India, making religion for citizenship totally irrelevant", continued Ms. Jaising.

She continued to canvass how, after the 2004 amendment to the Citizenship Act, 1955, citizenship can be acquired by birth only if one of the parents is an Indian citizen – "And therein lies the critical mischief of the 2004 amendment, that it denies citizenship on the basis of birth on the soil of India, except for the precondition that one of your parents was born in India. It appears that the origin of the CAA dates back to this period"

"In the US, today they have introduced the Dream Act, which grants citizenship to the undocumented migrants whose parents had migrated to the United States of America for the purposes of work. Contrast this with our CAA coupled with the NPA process", she pointed out.

Discussing the NPR process, she urged how it reverses the burden of proof on an undocumented person to prove his citizenship, contrary to the rule of law. She explained that as per the existing law, if the government says that one is not a citizen, it is the government which has to go to the court, to the Foreigners Tribunal, to prove the same

"We need to safeguard against the gradual erosion of the principle of innocent until proven guilty and the ordinary principles of burden of proof, which always lies on a State which says that you and I are not citizens", she cautioned.

"The defining moment of the present situation is that this government uses law to defeat the law, resulting in a state of lawlessness. When a democracy fails, our courts also fail us", stated Ms Jaising.

Giving an example of how citizenship rights have come to be negotiated away, she indicated how a bill has recently been introduced in the Lok Sabha which amends the NCT of Delhi Act of 1991, seeking to redefine 'government' as 'lieutenant governor' – "This may have also happened on account of some faulty decisions of the Supreme Court. It may surprise some that the Supreme Court has held that the right to vote is not a fundamental right. Then how can we call ourselves a republic? How can we call ourselves citizens? Saying that the right to vote is only a statutory right is to deny of a fundamental element of citizenship!"

"Why must I vote for a nominated Lieutenant Governor when I as a citizen of Delhi cast my vote? When I cast my vote, I cast it for a representative I have chosen as my representative. This is patently unconstitutional...We have mastered the art of defeating law by the law. Just change the goalposts, replace 'government' by 'Lieutenant Governor' and by a magic wand, we have lost all citizenship rights!", she said.

Ms. Jaising embarked on a discussion of the continued existence of section 124A, on sedition, in the IPC.

"The whole purpose of citizenship is liberty, life, the pursuit of happiness. Unfortunately, very few of us can today say that we are leading happy lives. The institutional autonomy has been eroded, the separation of powers has been eroded, free press is not visible today. Today I am not being called a citizen of India, but an 'antinational', an 'urban naxal'! Are these not curse words for a citizen?", she advanced.

"The most important right of citizenship, for me, is the right to speak my mind, which has been under attack for several years now. This government has successfully immobilised the opposition parties and now it is seeking to immobilise civil society. By civil society, you and I are concerned, the NGOs are concerned. They are the last line of defence of rights in this country- that is why it is important for the government to use the FCRA, the Enforcement Directorate, allegations of money-laundering against each and everyone of us", she advanced.

A FIR had been registered against Lawyers Collective (founded by Jaising and senior advocate Anand Grover) in June 2019 following a complaint made by Anil Kumar Dhasmana, an Under Secretary in the Ministry of Home Affairs (MHA), alleging that the NGO diverted foreign contributions for activities not mentioned in the objects of association and that funds were used for personal expenses unrelated to these objects. The FIR alleged that the NGO "was registered for carrying out social activities and had received foreign contribution amounting to Rs 32.39 crore between 2006-07 to 2014-15, but money was used for political purposes".

On November 27, 2011, the NGO's FCRA registration was cancelled and decision was taken to freeze all their bank accounts. Following the registration of FIR, the CBI had carried out raids in the offices and residences of Grover and Jaising. The FIR was registered after the Supreme Court issued notice in a PIL filed by an NGO named 'Lawyers Voice' demanding probe against Lawyers Collective.

"The offence of anti-nationalism does not exist in the IPC at all! Words like 'disaffection towards the government established by law', words like 'disloyalty' have no place in a representative form of democracy established by law, established under the Constitution of India. These are words which had an appropriate place in the imperial rule! We owe no duty of affection or loyalty to the government today! We have a right to dissent, which I want to see enshrined as a Fundamental right!", pressed Ms. Jaising.

Indicating a picture of poet and 81 year old activist Varavara Rao on a calendar hanging behind her, an accused in connection with the Bhima Koregaon incident, Ms. Jaising commended the "bold judgement" of the Bombay High Court, "anchored in the right to life", by virtue of which Rao has recently come to be relieved on medical grounds after months. The court had observed then, that if it denies relief to Rao, it will be abdicating its constitutional duties as a protector of human rights and right. Subsequently, the court even allowed his plea for relaxation of his temporary bail condition and provisional release on furnishing a cash security of Rs 50,000.

"It is not my case that I advocate violence, but I do believe that the debate over 124A cannot be anchored on whether my act was or was not violent. If I have indulged in a violent act, the law will take care of me. But to demand unquestioning loyalty to a government is to conflate the difference between the government and the nation", she articulated.

"Why do we crave for citizenship? Why do we want to be a citizen? Citizenship is the basis of all rights, which are fundamental under the Constitution of India. We give the right to citizenship more importance than any other right. It is not about residing in the country or identifying oneself with a section of people, it is basically the right to the other rights against the State. Considering the autocratic State that we are in today, the right to speak, the right to dissent are very important, so being a citizen is of utmost importance today", she elaborated.

"It is true that Article 21 is an exception to the rights belonging to the citizenship, Article 21 is available to non-citizens also. However, in actual practice, we are seeing that non-citizens don't enjoy it in the true sense – there are the Rohingyas who are being deported without due process", continued Ms. Jaising.

"I will reserve my right to dissent against unjust laws as my primary right of citizenship", she asserted, signing off.