"This Is A Nation That Has A Constitution, Liberty Cannot Be Infringed Like This":Justice Indira Banerjee On Kanojia's Arrest 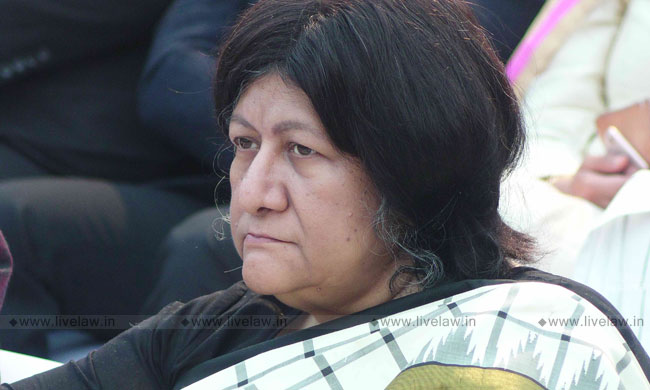 The Supreme Court on Tuesday directed the immediate release on bail of journalist Prashant Kanojia who was arrested by the state police for sharing a derogatory tweet against UP CM Yogi Adityanath. However, the vacation bench headed by Justice Indira Banerjee allowed the local police to take action against Kanojia as per the diktat of the law.ASG Vikramjit Bannerjee questioned the...

The Supreme Court on Tuesday directed the immediate release on bail of journalist Prashant Kanojia who was arrested by the state police for sharing a derogatory tweet against UP CM Yogi Adityanath. However, the vacation bench headed by Justice Indira Banerjee allowed the local police to take action against Kanojia as per the diktat of the law.

ASG Vikramjit Bannerjee questioned the maintainability of the plea for the writ of Habeas Corpus in the present instance, considering that by virtue of the order of the competent Magistrate, Kanojia has been placed in judicial custody till June 22-

"Now that there is a judicial order, he should have to approach the High Court...he can't seek Habeas Corpus here...the law is clear on this. A constitution bench of this court has said so"

The bench expressed its surprise at the arrest of the journalist in the first place.

"The law is actually clear...We have read the posts. It is a matter of opinion...We agree that such comments ought not to be made. But to arrest him? That would be an encroachment of personal liberty...", observed Justice Banerjee, inquiring about the provisions of law under which he was taken into custody.

When the ASG mentioned section 505 (Statement conducing to public mischief) of the IPC, Justice Arun Rastogi asked if the alleged act prima facie comprises of the requisite elements to amount to said offence, while Justice Banerjee wondered if there was indeed mischief.
The ASG justified Kanojia's implication under section 505, referring to the "very strong" and "inflammatory" tweets on his handle- "This is a not a personal vendetta. Neither is it about a singular post. If his account is seen, there are a series of tweets, not just about politicians but even Gods and Goddesses...with great liberty comes great responsibility...hence, he was charged with 505 later..."
The bench was also shocked by the order remanding him to judicial custody for 11 days.
While Justice Rastogi echoed "11 days?! Has an 11-day remand ever been heard of in a similar case?" disbelievingly, Justice Banerjee asked rhetorically if Kanojia has committed murder.
When the ASG reiterated that Kanojia may challenge the same before the High Court, the bench countered that the top court could also exercise is powers under Article 142 in the interest of justice.

"Ideally, we would not allow this under 32. But the Article is present for when one's liberty is curtailed. So when the illegality is so glaring, do we fold our hands and turn away the petitioner to go to the High Court?", remarked Justice Banerjee.

"Liberty, as a Fundamental Right, is sacrosanct and non-negotiable. It is a Constitutional guarantee. Bail must be given! It is not fair to expect him to seek remedy against the remand order from behind the bars", she asserted.

"We might not approve of the nature of his posts, but we are concerned about his arrest. This is a nation that has a Constitution. Liberty cannot be infringed like this", she stated.

When the ASG objected that freeing Kanojia at this point may be interpreted as "an endorsement" of the views voiced by him, Justice Banerjee refused to accept the argument, noting that

"We also take so much from social media, we also bear the brunt, but can that result in incarceration? Show your magnanimity!", she urged.

When the ASG prayed that it be clarified that his bail is not to be construed as an endorsement of his tweets, Justice Banerjee commented that it was unreasonable to act on the presumption that the educated public of today would be so gullible as to believe whatever someone feeds them on social media and be misled by a tweet.
The bench clarified that the sole relief being extended by the apex court was of bail and that the state may proceed against Kanojia in accordance with the law.
Next Story
Similar Posts
+ View more
Webinars
+ More
Law Firms
+ More
Latest News
+ More
लाइव लॉ हिंदी
+ More
International
+ More
Environment
+ More