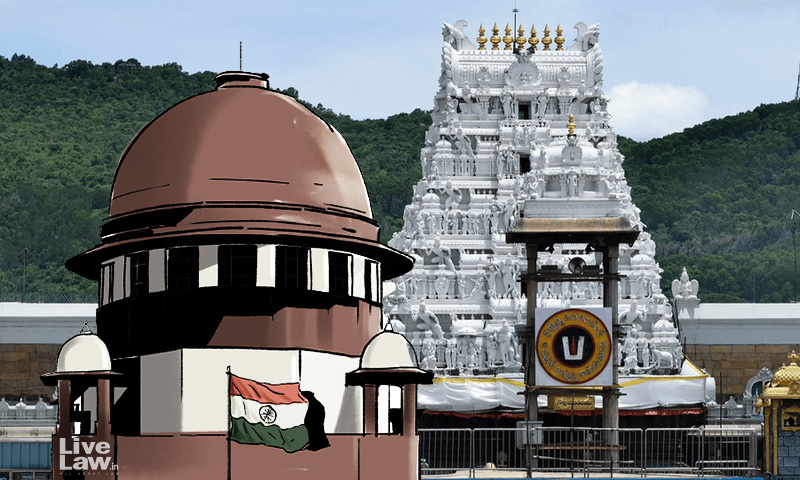 In response to a devotee's special leave petition alleging irregularities in in rituals at the iconic Tirupathi Temple, the Tirumala Tirupathi Devasthanam ("TTD") has told Supreme Court that the Sevas to Lord Venkateshwara are performed by Archakas under the supervision of His Holiness Pedda Jeeyangar Swamy and Chinnayajeeyangar swamy strictly in accordance with Vaikhanasa Agama.

The affidavit has been filed in the special leave petition challenging the order of Andhra Pradesh High Court dismissing a PIL filed by Srivari Daadaa ("petitioner"), seeking directions to TTD to rectify the method of performing rituals and seva to Lord Sri Venkateshwara Swamy at the Temple.

Last month, a bench led by the Chief Justice of India had sought the response of TTD to the petition.

TTD in the affidavit have also submitted that perfect checks and balances have been introduced by His Holiness Ramanujacharya to ensure that sevas/utsavams are conducted strictly in accordance with Vaikhanasa Agama.

It has further been submitted that the rituals are performed with utmost sincerity, faith and devotion by the Religious staff and other Priests of the temple.

"The system is running perfectly since thousand years. The TTD also constitutes an Agama Advisory Committee from time to time consisting of qualified pandits in Vaikhanasa Agama to guide the Archakas and advise the TTD in various religious matters. The TTD Administration provides all necessary infrastructure and support to the Archakas and His Holiness Pedda Jeeyangar to perform the rituals and that the Administration follows the advice of Agama Advisors, Pradhana Archakas and His Holiness Pedda Jeeyangar in assisting them to perform the rituals," TTD has submitted in their affidavit.

Vehemently denying petitioner's averments that Abhishekh Seva is being performed on every Friday to Lord Venkateshwara "without clothes", TTD has stated that a white cloth called "Kowpeenam" is adorned to the Lord while performing Abhishekam with milk.

To further substantiate their submission, TTD has said that, "the Abhishekam is strictly being performed combindely by the Archakas and His Holiness Pedda Jeeyangar and Chinna Jeeyangar strictly following the age old tradition and Vaikhanasa Agama."

Stating the petitioner's averments on conduct of Arjitha Brahomstsavam that the procession of Lord on vahanams is not being conducted round the mada streets as misconcieved, TTD in their affidavit has said that,

"The Arjitha Brahomstsavam seva has been introduced by the TTD for the benefit of public and specially designed by seating the Lord on three vahanams viz Garuda, Hanumanta and Sestha Vahanams. The utsavam itself has been designed in such a way that Lord appears to the devotees by seating on three vahanams without any procession. During Annual Brahmotsavams and in certain special occasions like Nagapanchami, Garudapanchami etc, the Lord takes processions on the vahanams round the mada streets."

Denying petitioner's averment of not showing Lord's feet during Maha Laghu Darshanam, TTD has submitted that Lord's darshan is not a seva/utsavam prescribed in the Vaikhanasagama sastra.

"The TTD administration provides darshan of the Lord to the pilgrims keeping in view the number of pilgrims waiting for Lord's darshan. More than 1 lakh people on an average visit Tirumala for darshan of Lord. If every pilgrim is allowed to have darshan of Lord at Kulasekhara padi only about 9000 pilgrims can be provided darshan in a day at 800 per hour," TTD has further stated.

On this aspect, TTD has also said that, "Whereas during Maha Laghu Darshan, about 5000 pilgrims can be provided darshan per hour resulting in about 80,000 to 90,000 pilgrims having Lord's darshan in a day. To provide Lord's darshan to the maximum number of pilgrims and satisfy them, TTD adopts Maha Laghu Darshan which was introduced in 2006. So far crores of pilgrims had darshan during the last fifteen years and nobody has objected to this kind of darshan. The pilgrim normally expects to have darshan with a reasonable time without much waiting and a glimpse of Lord which is being provided by the TTD. The TTD always keeps pilgrims interest at the Top Agenda to provide them hassle free darshan and facilities in Tirumala."

Averring that the petitioner is not aware of the Agama practices of the temple, TTD has stated that as per the Agama prescription, Lord's holy feet are covered with basil and even going close to Lord, one cannot see Lord's divine feet.

According to the petitioner, the Devasthanam is performing sevas namely, Abhishekam Seva, Thomala Seva, Arjitha Brahmostavam, Yekanta Utsavalu (Srivari Varshika Brahmotsavams – 2020) and Maha Laghu Darshan, in a wrongful and irregular procedure and the method of holding the rituals should therefore be rectified.

The High Court through its impugned order had held that the PIL was not maintainable for since the procedure of conducting rituals is the exclusive domain of the Devasthanam and cannot be a matter of adjudication unless it impacts secular or civil rights of others.

Further, the High Court had held that the Devasthanam cannot be said to be discharging public duties in the matter of conducting rituals. Such activities falling within ecclesiastical domain are not amenable to writ jurisdiction at the behest of an outsider.