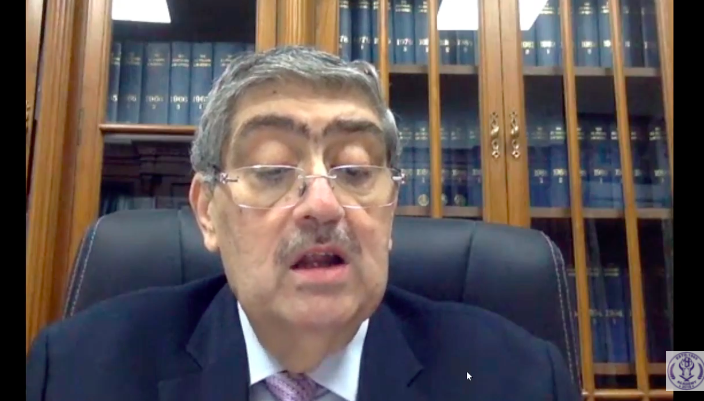 Justice Sanjay Kishan Kaul , judge of the Supreme Court, on Sunday spoke on the menace of fake news and its derivatives at an online lecture organised by Madras Bar Association."The idea of Freedom of Speech, the subject of Freedom of speech in these times appeal to me. I feel like the challenges of these times are a little different with respect to the topic with which we are...

Justice Sanjay Kishan Kaul , judge of the Supreme Court, on Sunday spoke on the menace of fake news and its derivatives at an online lecture organised by Madras Bar Association.

"The idea of Freedom of Speech, the subject of Freedom of speech in these times appeal to me. I feel like the challenges of these times are a little different with respect to the topic with which we are discussing. Also, from the perspective of expansion of technology which has taken place, it becomes extremely important." said Justice Kaul in his opening remarks.

Justice Kaul stated that the problem of fake news dissemination & misinformation can be attributed to the onslaught of platforms due to technological advances. He added that the challenge of fake news becomes even more intensified in times of the pandemic.

"Fake news is more dangerous than the Coronavirus itself. Its ramifications are manifold" , Justice Kaul said.

While highlighting the pertinent need to inculcate "tolerance", which Justice Kaul stated has been going down in India, he stated that that "a section which calls another intolerant becomes intolerant themselves".

"In the last number of years, the tolerance levels in various sections have started going down", he commented.

He said that labels such as 'urban naxals' and 'Modi-bhakts' are used to categorize people holding on to different view points. He believed that such tendencies was killing the space for free discussion of ideas.

"We have to understand and appreciate another's point of view without agreeing with it" said Justice Kaul.

"What is perceived as the middle path becomes a casualty. The shades of grey suffer. You get into only blacks and whites", said Justice Kaul, who has authored judgments upholding the right of artistic freedom in the cases of M F Hussain (in Delhi HC) and Perumal Murugan (as judge of Madras HC).

"If you do not like a book, throw it away", Justice Kaul said, referring to his judgment in Perumal Murugan case.

Next,Justice Kaul went on to elucidate that Constitution-makers never envisaged the propensity of fake news futuristically as as been caused by the new-age media. Mindless forwarding of whatsapp messages, without verifying or application of mind has led to a state of affairs where no responsibility can be bestowed for such dissemination, he said.

Emphasising on the difference between the responsibilities of the press and social media, Justice Kaul stated that while the press can be held accountable for dissemination of misinformation, the same may not be possible with social media.

"Journalists have a badge. They have a team of editors and are responsible for their publications. When the press is writing, they are accountable. Writing news is their bread and butter, and they write with a certain sense of responsibility. But there were others who use social media to maybe not propagate their views, but to express, without checks or balances," he said.

The need for regulatory legislations was pointed out by Justice Kaul to handle platforms. He said that he was not in favour of Government centric regulations to deal with misinformation on social media platforms.

Additionally, Justice Kaul also spoke on the issue of Trolling on social media and the rising demands for "Instant Justice".

"Trolling on social media a concern. Obscenity is a concern - take for example the bois locker room incident - the way it unfolded, its ramifications - unfortunately a boy took his life. Now people want "instant justice". This leads to "herd-mentality". This demand of "instant justice" is problem. Instant justice can do a lot of injustice. When you endeavour to do this, Please remember that you can also be at the receiving end of this", he said.

Justice Kaul said that hate-speech is also a cause of concern and then went on to state that the trend seems to be of calling out the Government for every measure being taken.

Answering a question on the thin line of difference between criticism of the Government and sedition, Justice Kaul said that calling out the government for its policies does not amount to sedition. "Thin line starts when concerted groups get into a campaign of spreading misinformation. A calls B intolerant. Truth is A is equally intolerant", he added.

Further, he said that people must verify and apply their rational minds before they send out information or respond to anything.

"If possible count to 10 before you respond to anything" - Justice Kaul.

"More thinking and responsible citizens should help in this process.When thinking and educated people don't apply their mind and go to extremes, the problems arise" he said.

Justice Kaul also said that when imputation and gradings are made with respect to the judiciary, it will damage the institution.

"Criticism of a view point, of a judgment is okay, there is no problem. But when imputations and gradings are made, I think we damage the very institution", he said.

According to his, that will be a case of "after me deluge" thinking.