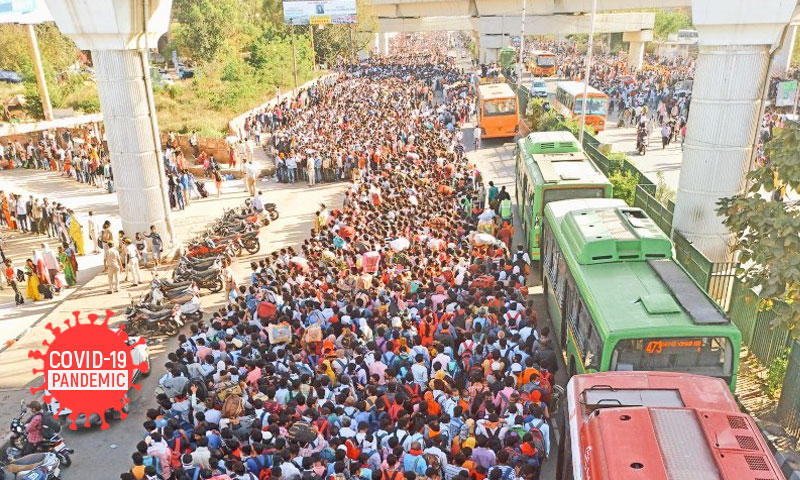 The Trade Unions of Maharashtra have filed an application in Supreme Court, seeking to intervene in a plea which had prayed that the Court should set aside the order by the Ministry of Home Affairs (MHA) which directed private establishments to pay full wages to workers during the lockdown. The Applicants have requested for permission to reply to the contentions of this petition,...

The Trade Unions of Maharashtra have filed an application in Supreme Court, seeking to intervene in a plea which had prayed that the Court should set aside the order by the Ministry of Home Affairs (MHA) which directed private establishments to pay full wages to workers during the lockdown.

The Applicants have requested for permission to reply to the contentions of this petition, as they have fundamental interest in the issue being raised. The Trade Union Joint Action Committee, Maharashtra, Trade Union Centre of India and Hind Mazdoor Sabha have jointly filed this application to highlight that the closure of workplaces directly affects the sustenance and livelihood of its members.

Filed through Advocate Aparna Bhat, the application lays out certain grounds in response to the Mumbai based textile firm's plea challenging the Order dated March 29, 2020.

At the outset it is argued that the Government had the power to issue such an Order, in wake of a disaster (COVID-19 pandemic) that clearly exists, in accordance with the provisions of the Disaster Management Act 2005. Since workers will not be able to survive a lockdown without wages, it is submitted, the decision to ensure they are paid full salaries is a measure to ensure the lockdown is effective.

"Though the law does not require the authority making such an order to state reasons for passing such an order, this Hon'ble Court can take judicial notice of the fact that one of the worst pandemics in the history of humankind (the COVID-19 pandemic) is presently afoot. In such a situation the Government has deemed it necessary to have a lockdown. Most workers cannot survive such a lockdown without wages. As such it is clearly in the nature of a measure to make the lockdown effective."

The application further submits that the contracts of workers clarify that they are entitled to wages for as long as they are employed and willing to work, but cannot imply that the same will not be adhered to if the employer is unable to provide them with work. Thus it is contended that workers cannot be punished for not being allowed to work as their contract of service is "valid and subsisting during the lockdown."

Having said that, it is urged that even if the contract did not subsist, the Government is entitled to create or modify a contract under the Disaster Management Act 2005 given the prevailing circumstances. It has been further stated that "under the Industrial Disputes Act, 1947 there can be no reduction in wages without following proper procedure of law."

Backing the Government's decision, "it is submitted that the order merely recognizes the right of the workers to get their wages in a situation like the present lockdown and makes the authorities responsible to see that such wages are paid."

Furthermore it is contended that the original petitioner's argument of the Government being unfair to private employers is not well founded. The State is taking on the same burden by paying full wages to their employees.

"The Petitioner has wholly missed the point that all Class 4 State Government and Central Government employees have been exempted from any reduction in wages. Thus, the there is no larger burden being put on private employers than the state is taking on to itself."

The application then throws light on how expenses not only remain constant for workers but increases during a situation like this where basic essentials cost more, and argues against entertaining schemes and formulae suggested for reduction of wages by the textile mill.