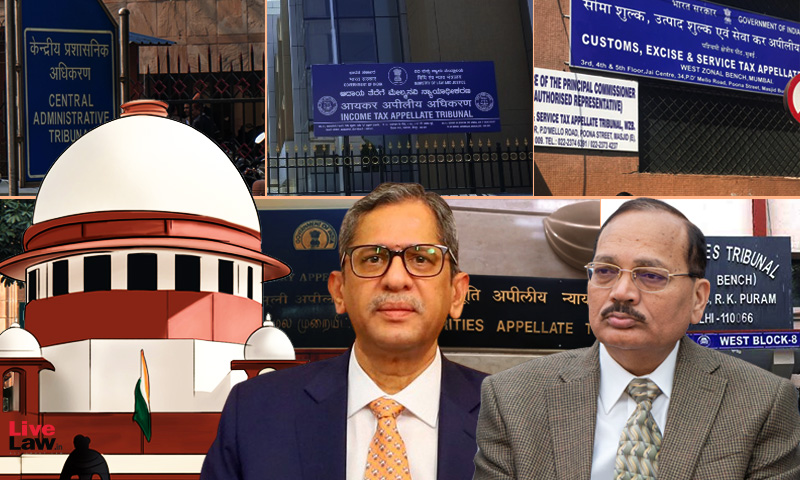 Expressing serious concerns at the mounting vacancies in various tribunals across the country, the Supreme Court on Friday said that it is getting an impression that the bureaucracy does not want these bodies to function.A bench comprising Chief Justice of India NV Ramana and Justice Surya Kant sternly asked the Union Government to make a "clear stand" as regards the timely filling up...

Expressing serious concerns at the mounting vacancies in various tribunals across the country, the Supreme Court on Friday said that it is getting an impression that the bureaucracy does not want these bodies to function.

A bench comprising Chief Justice of India NV Ramana and Justice Surya Kant sternly asked the Union Government to make a "clear stand" as regards the timely filling up of vacancies. The bench warned that it will summon top officials of the government before the Court if the situation is not remedied, and asked the Solicitor General of India Tushar Mehta to ensure that such a situation is not generated.

"The concern is, we must know the clear stand on continuation of tribunals or closing of tribunals. The impression that we are gathering is, it seems that bureaucracy doesn't want these tribunals", the CJI told the Solicitor General.

"We expect in a week's time you will take a call and apprise us. Otherwise we are very serious, we are going to force to ask top officers to appear and give reasons. Please don't generate such a situation." the CJI told the SG.
The Bench also expressed its suspicion as to whether some lobbies have been working to not fill these vacancies.
"We have our own suspicions that some lobbies may be working to not fill these vacancies", the CJI said.
When the Solicitor General told the bench that the Attorney General for India KK Venugopal will assist the court in this matter as he is handling cases related to Tribunals, the CJI said that the bench does not want to bother the AG and required the SG to get the necessary instructions.

During the hearing, CJI Ramana said that a total vacancies of 20 presiding officers, 110 judicial members, and 111 Technical members in all Tribunals are pending. He went on to read out the available vacancies in various Tribunals, based on information received from Registry:

Debt Recovery Tribunals: There is no chairperson or presiding members in 15 places, and these vacancies have been since December 2019.

National Company Law Tribunal: NCLT President is not there, there are vacancies of 9 Judicial and 14 technical members. CJI stated that both him and Justice Surya Kant are members of that committee and recommended selection for these members on 27th May 2020.

National Consumer Dispute Redressal Commission:  3 Technical member posts are vacant. Justice DY Chandrachud is the member of the selection committee and recommendations were made on 24th June 2020.

Armed forces Tribunal: 13 Judicial and some technical members are vacant. Justice Khanwilkar is the part of the selection committee which had made recommendations in 2020.

National Green Tribunal: There are vacancies for 14 judicial and 16 technical members and Justice Kaul had requested to expedite but it wasn't done.

Bench led by CJI has asked the Centre to make a "clear stand" on filling up vacancies, while adding that bureaucracy seems to be against Tribunals. pic.twitter.com/BMAdhQm0GM 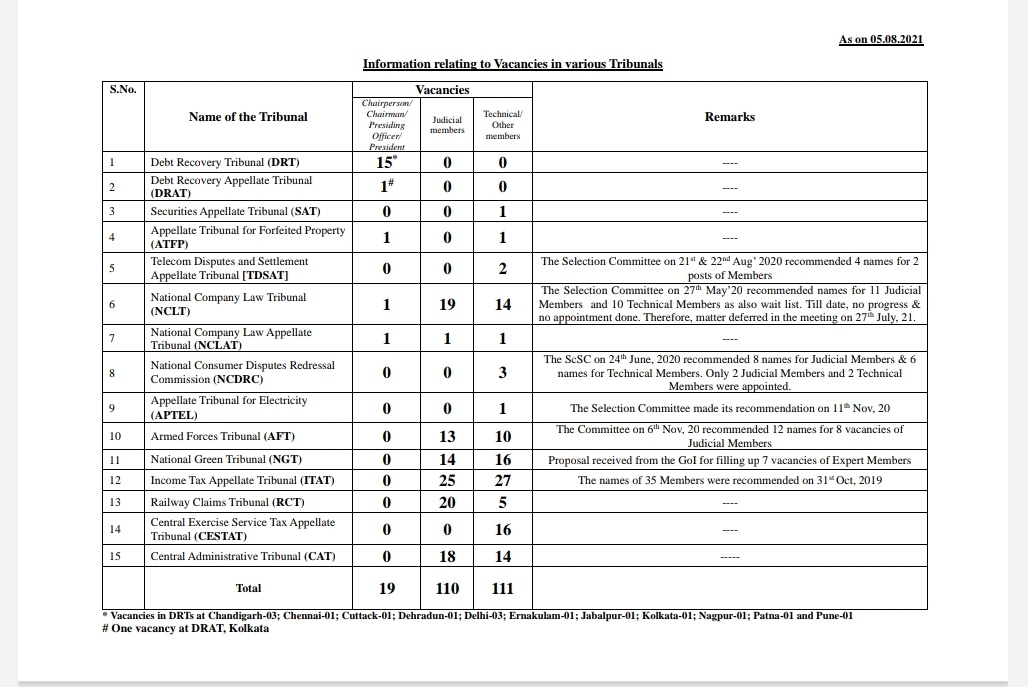 Solicitor General Tushar Mehta agreed with the Court's concerns and submitted that something needs to be done regarding the vacancies. He added that he would convey the same to the government today itself

He pointed that one reason for unfilled vacancies is pendency of litigation.

Justice Surya Kant responded to SG's submission saying that the litigations might be pertaining to tenure of members and has nothing to do with appointment. Therefore appointment can be made with tenure being subject to pending litigation.

"You can't keep people remediless. If you don't want Tribunals allows us to restore jurisdiction of High Courts, if you want Tribunals fill up vacancies. People are entitled to go somewhere" Justice Surya Kant said.

"One of the dispute is with regard to tenure, another dispute is also regarding the manner of appointment, which is subject to be examined." SG said.

The Bench responded saying that the Tribunals are all creation of different statutes and statutes provide composition of selection committee, and recommendations have been made by the Selection Committee.

"Wherever Selection committee have recommended names, they are mostly presided by sitting SC Judges. You can make appointments immediately and make Tribunals functional and the tenure, conditions etc are already settled by this court." Justice Surya Kant said.

The Bench made the observations while hearing the following two pleas:

On the issue of Constitution of a GST Appellate Tribunal, CJI observed that "An appellate tribunal has to be there for those aggrieved. CGST act came into force about 4 years back, you have been unable to create an appellate Tribunal. You passed an administrative order in December 2019 on unending limitation. The order was passed by Ministry of Finance to increase limitation on for non constitution of Tribunal. What is this?" CJI remarked.

Senior Advocate Nidhesh Gupta appearing for petitioner Council argued that some reforms have been issued 3 days back, which are again in violation of Court's decision in Madras Bar Association case. Mr Gupta was referring to the Tribunal Reforms Bill 2021.

SG Mehta objected to discussing the same in the Court as it is before the Parliament.

The matters will be heard next on August 16.