Tribunals CB [Day-1, Session-1] There Is A Strong View Point That Post-Retirement Appointments Is A Scar On Independence Of Judiciary, Says CJI 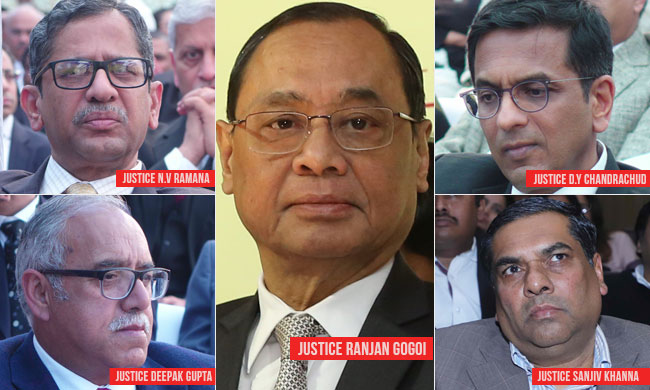 "There is no dispute that most of these tribunals are virtually non-functioning either for the lack of infrastructure or manpower...there is a very practical solution and the idea is to have as few tribunals as possible. And to ensure uniformity on the quasi-judicial side", remarked Chief Justice Ranjan Gogoi on Wednesday. The Constitution bench headed by Chief Justice was hearing...

"There is no dispute that most of these tribunals are virtually non-functioning either for the lack of infrastructure or manpower...there is a very practical solution and the idea is to have as few tribunals as possible. And to ensure uniformity on the quasi-judicial side", remarked Chief Justice Ranjan Gogoi on Wednesday.

Earlier, Senior Advocate Arvind Datar had pointed out that while the NGT has a strength of 20 judicial and 20 technical members, it continues to operate with only 3 of each. "The Green Tribunal is working only in Delhi. At other places, it is shut down! There is no work! The NGT speaks of video conferencing but that is not always feasible", he had said.

Further, He had submitted how not a single patent appeal has been heard after 2016- "If a patent is granted for a drug and it is a defective grant, it would still continue!"

Mr. Datar advanced that for the Madras ITAT, the government had stated that there is no budgetary support for a separate building and how it operates without a parking facility, while Justice N. V. Ramana added that at some tribunals, there are no stenographers or even chairs and tables.

"Why would a High Court judge, who has had all the wrappings of power, want to go to a tribunal if this is the status?", Mr. Datar had asked.

"In the last recruitment, District Judges, who have had no exposure to any kind of tax practice till the age of 58, who were only dealing with criminal matters, have suddenly been inducted in the tax tribunal. Informally, we had even asked them how they would manage", the Chief Justice proceeded to note.

Justice N. V. Ramana also narrated his experience in the selection of members of the Company Law Tribunals- "we asked, 'what is your qualification?' They said, 'I was enrolled as a member of the bar and have a lot of experience'"

"The recruitment, the service conditions, the tenure- the whole exercise needs to have some uniformity to maintain the independence and the judicial character. We have absolute lack of similarity in the manner of selection", continued the CJ.

"These are tribunals which are crucial to the development of the nation. The Service conditions have to be such which attract the best talent. Otherwise, there will be no contribution towards development", weighed in Justice D. Y. Chandrachud.

"There is no access to justice! As far as the green tribunal is concerned, people from remote areas cannot afford to come", supplemented Justice Deepak Gupta.

"And the Chairperson cannot go to 20 places! So what is the solution. Are we going back to High Courts?", argued Mr. Datar, relying on a 7-judge bench of the Canadian Supreme Court where it was observed that if there are more cases, more judges may be created but the judicial power may not be taken away to be vested in tribunals. "if you want to take away the powers of the court, you must ensure functional autonomy!", he contended.

"The efficiency of the tribunals depends not just on the judges who man them but also on the non-judicial staff. In the UK, there is Her Majesty's Courts and Tribunals Service which specifically assigns persons. Here, in India, people come on an ad-hoc basis from different departments...they come for six months and go back...they do what they want and the Presiding Officer has hardly any disciplinary control over them. This beats the efficiency...", reflected Justice Chandrachud.

"There is a PIL judgment of our court from last year where we called for a report of the president of the NCDRC on administrative members and what are the requirements from them...They have very broad requirements, like knowledge of Economics! There are no established parameters...There was no infrastructure. Files were kept underneath staircases!", he continued.

"In Madras, in the District Consumer Forum, there is no manning at all! There is no provision of salaries! Instead there is a daily allowance to cover the auto-rickshaw fare!", added Mr. Datar.

"We don't only want to you to point out what should not be happening. There is a problem in hand and we all know what is to be done. The question is How should we do it? There is no point of adding any directions. They are all comprehensive...There are a host of issues- from staffing to functioning to infrastructure. And there are at least 36 national tribunals whose functioning is required. We need to see results! Whatever is needed to be done is already there! Let it be done! If the government of India doesn't want to, then let us know", observed Chief Justice Gogoi.

"When was the recommendation for appointments to the NGT made? Assuming that they were the correct candidates to man these high-power positions, why are there still only 3 and 3?... The NCLT wants benches all over the country. The Selection committee is recommending but there are no appointments. This is again assuming that those recommended are capable because these are people who have themselves applied and are interested in the post. There is no reason assigned for turning down the recommendations of the selection committee. It is said that you are only the recommending authority but we have the power to appoint. We want the government of India to tell us if you want the tribunals to continue. Else, let work out something else", ventured the Chief Justice.

"Look at the state of our high courts in terms of the number of judges. The whole idea of transferring the jurisdiction was to lighten the burden...What is the total number of High Court judges? 1089. How many are actually holding office? 397 is the number of vacancies. 264 are yet to be even recommended by high courts. When will they come? When will they be processed? When will the appointments be made? And by that time, how many more judges will have retired? With this truncated stance of the High Courts, where is the question of them taking up more work?", inquired Chief Justice Gogoi.

"In some High Courts, writ petitions are listed four weeks after filing. Here, in the Supreme Court, the matter comes up after 4 days and there is still mentioning. In a particular High Court which I will not name, a bail application takes 4 weeks to be heard. The Andhra Pradesh and Telangana High Court, before bifurcation, was working with a 50% strength and a pendency of 3 lakhs...As for tribunals, you are setting up benches of NCLT everywhere because the Act says so, but you don't have people to man these benches because you are not making appointments!"

"But Let us not blame the government. If there are 60 people applying for the post of judicial members, few are former high court judges. If there are only 4-5 high court judges, how to decide?...Retired High Court judges are Not willing to become members because of the uncertainty in the process of appointment. They can't be expected to wait for one year to become a member!", conceded the Chief Justice.

In response to Mr. Datar's suggestions for a National Tribunals Commission as a regulatory body for the tribunals, an Indian Tribunals Services for recruitment on the lines of the IRS etc, and for a longer tenure, Chief Justice Gogoi noted, "Suppose a member is given a permanent tenure till the age of 62 years as opposed to 3 years, you can't get rid of him no matter what..."

"You are suggesting a clause in the statute that the person who is the chairperson should not take up any other assignment...Something akin to the lokpal in the states, where after ceasing to hold that office, you are mot eligible to hold another public office for 5 years...There is a saying that post-retirement appointment is itself a scar on the independence of the judiciary. How do you handle that?", asked the Chief Justice.

When Mr. Datar replied that it is only a viewpoint, Chief Justice Gogoi commented on a lighter note, "it is a very strong viewpoint"

The recruitment, the service conditions, the tenure- the whole exercise needs to have some uniformity to maintain the independence and the judicial character. We have absolute lack of similarity in the manner of selection...while some (tribunals) have a retired judge or a Chief Justice as the Chairperson, Some don't, even though it is necessary in terms of the functions and duties", continued the CJ.