'No Advocate With Only 10 Years Experience Ever Made A High Court Judge' : Centre Defends Tribunals Reforms Act 2021 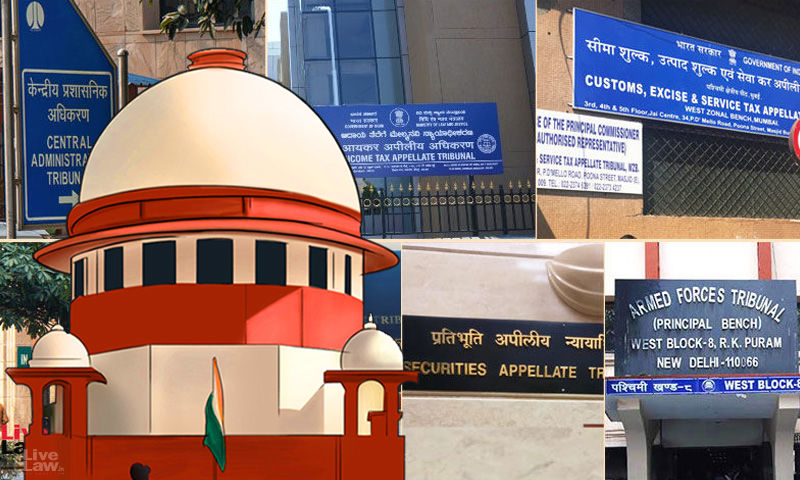 The Central Government has filed a counter-affidavit before the Supreme Court defending the constitutional validity of the recently passed Tribunals Reforms Act 2021. The affidavit has been filed responding to the writ petition filed by Madras Bar Association, which has argued that the Act is unconstitutional for violating the directions issued by the Supreme Court in previous judgments.At...

The Central Government has filed a counter-affidavit before the Supreme Court defending the constitutional validity of the recently passed Tribunals Reforms Act 2021. The affidavit has been filed responding to the writ petition filed by Madras Bar Association, which has argued that the Act is unconstitutional for violating the directions issued by the Supreme Court in previous judgments.

At the outset, the Centre states that the matters related to selection process of Tribunal members, their minimum-age qualification and tenure are completely within the domain of the Parliament being policy decisions. Refuting the Court's view that these issues are linked with judicial independence, the Centre asserts that legislative policy can be invalidated only if it violates fundamental rights or is beyond legislative competence.

It is highlighted in the affidavit that the Search-cum-Selection Committee has judicial dominance and hence the concerns about judicial independence are misplaced.

Responding to the argument that the fixing the minimum age-limit for the members as 50 years violated the direction in the Supreme Court judgment that advocates with minimum of 10 years experience should be considered for appointment, the Centre points out that no advocate with just a minimum experience of 10 years has ever been made a High Court judge, though that it is the constitutionally prescribed qualification.

"The fact is that no single appointment of an advocate with 10 years practice has ever been made to a High Court in the last 75 years", the affidavit points out. It is highlighted that most High Court judge appointments take place during the age bracket of 45-50 years.

"The directive in MBA-IV that advocates with 10 years of standing would be eligible; for appointment was based on the fact that the Consdtution permits the appointment of such persons as judges of the High Courts. Yet, this rule & 10 years has not resulted in a single appointment having taken place, till date, to any High Court, of a lawyer with only 10 years of professional standing.

It should also be remembered that to limit the experience to 10 years in the case of a professional like a lawyer without extending the same benefit to other professionals who are eligible to be appointed as members of the Tribunals like chartered accountants, environmentalists, and other technical experts such as those having professional experience in economics, business, commerce, finance, management, industry, public affairs, administration, telecommunications, investment, financial sectors including securities market or pension funds or commodity derivates or insurance, commercial matters in regard to railways, etc. would be ex facie discriminatory and would be liable to be struck down".

The Centre also submits that the Court should not have struck down the provisions relating to age-limit and tenure of Tribunal members in the previous Madras Bar Association case as they are pure policy matters.

"Government equally believes that the Court striking down these pure matters of policy violates the separation of powers by the judicial wing of the State," it stated.

The Government has stated that the previous directions on Tribunals can only be regarded as recommendatory in nature, as the judiciary cannot issue mandamus to the Parliament to make law.

"These directions can only be treated as recommendatory in nature. Not implementing these directions cannot be said to be in violation of the judgments of the Court. This is on the basis that the Courts cannot direct the legislature to make a law in a particular manner", the affidavit stated.

The affidavit points out that the majority decision in the previous Madras Bar Association case struck down the provisions as violating the principle of judicial independence, which is part of the basic structure of the Constitution. In this regard, the Centre argues that violation of basic structure cannot be a ground to invalidate a statute.

"It has been held in a series of cases including by two Constitutional Bench decisions and by a 7 judges bench of this Hon'ble Court that basic structure in the Constitution can only be used to test the validity of a Constitutional amendment but has no relevance when it comes to validity of a statue", said the affidavit.

It is also contended that independence of the judiciary is not a ground which can be used for testing statutes.

The affidavit also makes several references to the dissenting judgment of Justice Hemant Gupta, which upheld the provisions of the Tribunals Reforms Ordinance.

The Centre also asserts that the present Act does not affect judicial independence in any manner, as sufficient safeguards have been incorporated - such as judicial dominance in the SCSC, fixation of salary of the members as per the directions of the court.

Earlier, the Supreme Court had made sharp oral remarks against the Tribunal Reforms Act 2021, by stating that it has "virtually re-enacted the struck down provisions". A bench comprising the Chief Justice of India NV Ramana, Justice DY Chandrachud and Justice L Nageswara Rao expressed dissatisfaction with the Centre for delaying Tribunal appointments. At one point, a distressed bench even went to the extent of stating that it will stay the Act.