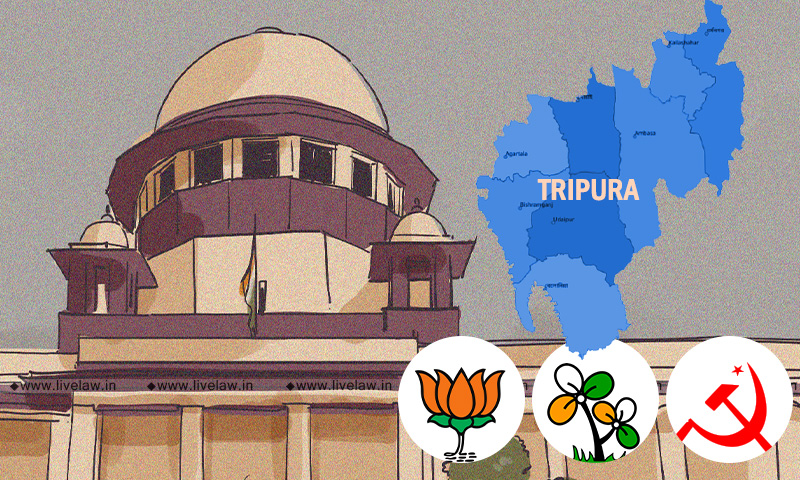 In view of the allegations of violence during the polling day(which is today) for local body elections in Tripura, the Supreme Court on Thursday directed the Home Secretary of Tripura Government, the State Election Commission and the Director General of Police to ensure that every polling booth is manned by sufficient strength of Central Armed Police Force(CAPF) personnel.The Court also...

In view of the allegations of violence during the polling day(which is today) for local body elections in Tripura, the Supreme Court on Thursday directed the Home Secretary of Tripura Government, the State Election Commission and the Director General of Police to ensure that every polling booth is manned by sufficient strength of Central Armed Police Force(CAPF) personnel.

The Court also directed that the polling officers should take the help of the CAPF personnel in the event of any emergency.

The Court also directed that print and electronic media should have unhindered access to report the election, after being told by the counsel for Trinamool Congress that all polling booths did not not have CCTV cameras.

"It is important that both electronic and print media should have unhindered access for full reporting and coverage of the election process. Directions to effectuate this part of the order shall also be issued by the DGP and home secretary and the state election commission to all the polling officers and other concerned personnel on the ground", the Court noted in the order.

The Court was informed that there are 770 polling booths in the State.

A bench comprising Justices DY Chandrachud, Surya Kant and Vikram Nath further directed the DGP and Secretary to the Department of Home Affairs of Tripura to immediately assess the security situation and review the need for additional deployment of central forces.

The Court also directed the Union Ministry of Home Affairs to provide an additional two companies of CAPF at its discretion as expeditiously as possible having due regard that polling has already commenced. The Court also took on record the undertaking made by Solicitor General of India Tushar Mehta that the MHA will respond immediately to any requisition for additional battalion for central paramilitary forces made by the State Government.

The Court was apprised of the fact that as a result of the redeployment of two companies of the BSF last night, 128 personnel of the BSF are also stationed in addition to the force which is made available.

Senior Advocate Gopal Shankaranarayanan, appearing for Trinamool Congress, and Senior Advocate PV Surendranath, appearing for the CPI(M), submitted that widespread acts of violence are happening today, the day of polling. Shankaranarayanan submitted that there are multiple videos of outsiders barging into polling booths and offered to produce the video evidence before the bench. He added that a candidate of TMC was being prevented from casting vote.
Senior Advocate Mahesh Jethmalani, appearing for the State of Tripura, refuted the allegations and submitted that all steps are taken to ensure peaceful elections. The State Government filed a report before the Court stating that a requisition for additional CAPF battalion was made to the MHA, following the assessment of security situation by the DGP, Home Secretary and the State Election Commission.
The State further submitted that in addition to the 78 sections which were noted in the previous order of the court, 15 additional sections have been deployed, and pursuant to the requisition made by the DGP and Home Secretary of the state of Tripura, two companies of the border security force have been deployed by the union Ministry of home affairs. Moreover 458 personnel belonging to the Tripura State rifles have been deployed for law and order duties.
The Court passed the ad-interim directions without going into the merits of the allegations. "...enquiring into the merits of the allegations submitted by the petitioners and intervenor would occassion further delay. Hence at this statge, having regard to the anture of exigency of the situation, we are of the view that certaind ad-interim directions are necessary", the bench noted in the order.
On the previous hearing date, November 23, the bench had turned down the plea made by Trinamool Congress to postpone the local body elections, scheduled to take place today. However, the bench issued a slew of directions to the DGP and IG (Law and Order) of Tripura to ensure that the polls take place in a peaceful manner. The Court asked the police to act in an "even handed" and "non-partisan" manner to assuage the grievances of the opposition members. The Court also directed the Tripura police to submit a chart today indicating the action taken on the complaints lodged by the Trinamool congress members.