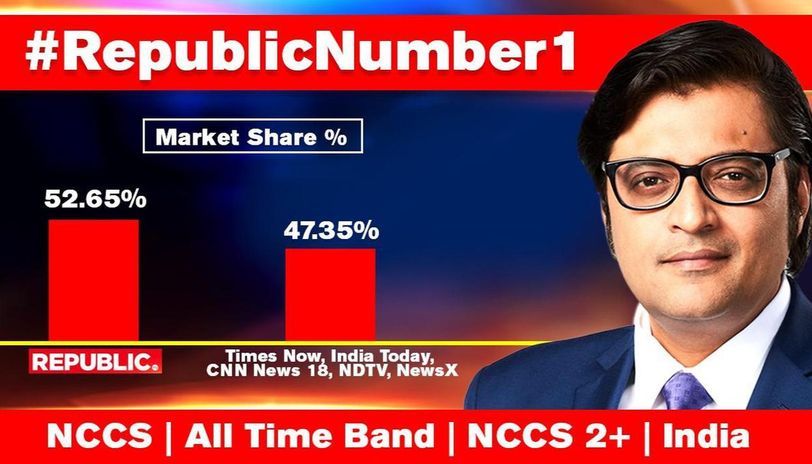 The Bombay HC is set to hear the TRP Scam Case on Monday (14th December).

The Petitioners i.e. ARG Outlier and Goswami (Petitioner number 1 & 2) have stated in their Interim Application that the investigation in the TRP Scam Case is a "witch hunt targeted at petitioners for its criticism of the Government."Claims made against Crime Intelligence Unit in the IA

The plea claims that the Crime Intelligence Unit has hurriedly filed the Charge sheet in the matter "without the material particulars."

It also claims that the malafide intent of the Crime Intelligence Unit in harassing and intimidating the petitioners and its employees "continues unabated even after the filing of the charge sheet."

The IA filed by the ARG Outlier and Goswami, claims that the Crime Intelligence Unit, DCB CID, Crime Bench (respondent number 3) is purportedly carrying on further investigation in the matter by continuously issuing summons, within a day of filing the charge sheet, to the employees of ARG outlier Media Private Limited (petitioner number 1) and "carrying out their interrogation despite filing a charge sheet in the matter which is indicative of closure and completion and investigation of investigation."

It is alleged in the application that the Mumbai police  did everything to try and intimidate Ghanshyam Singh into implicating himself and the Petitioner No. 1 during the course of the interrogation.

"Mr. Singh suffered immense pain and cried out loudly because of the force with which the police officer was lashing him; but the subordinate police officers following the instruction of the senior police officer kept lashing him on his hands, despite his cries of pain. All officers present were witness to Mr. Singh's assault in custody and were bystanders to the crime, as directed to be committed by the senior police officer. It is clear that Mr. Singh was stripped off his every basic human dignity by the officers of the Respondent No. 3. Mr. Singh was constantly pressured to implicate himself and the Petitioner No. 1 in the alleged TRP scam".

Importantly, the IA states that the Petitioners are being "selectively targeted" even after the filing of the Charge sheet in the matter.

The IA has also claimed that,

"Why the state machinery is overactive over this as is not for to seek, since Respondent number 4 (Commissioner of Police, Param Bir Singh) leaving his other duties, is giving press conferences targeting the Petitioners declaring them guilty and ensuring the harassment of the Petitioner on a private cheating compliant in which petitioners are not even named."

"Transfer the Case to CBI"

The Petitioners have prayed in the IA that the investigation in the TRP Scam Case should be transferred to the CBI as the Scam has nationwide ramifications and the matter has already been taken over by the CBI in connection with the FIR 0318 of 2020 registered at Hazratganj police Station Lukcnow.

It may be noted here that the case (FIR 0318 of 2020), which was earlier registered at Hazratganj police station in Lucknow based on a complaint of an advertising company promoter, was handed over to the CBI by the Uttar Pradesh government on 20th October 2020.

According to officials the primary allegations relate to manipulation of TRPs in return for payment.

The IA alleges that on 21st October, the State of Maharashtra, "in a clear attempt to prevent the CBI from investigating the alleged TRP Scam" withdrew its general consent given to CBI to probe cases in the State Of Maharashtra.

The Petitioners have further stated that failing urgent direction from Bombay HC before 14th December, "they have reasonable grounds to believe that the Crime Intelligence Unit will act in a manner to prejudice the matter and impinge the rights of the Petitioners irreparably."

Specific prayers of the Petitioners

The IA also prayes for the direction to Respondent 1 to 4 not to take any steps and coercive action or otherwise Petitioner number 1 (ARG outlier), its employees, agents, advertisers, investors, third parties connected with ARG and Petitioner number 2 (Goswami).

As stated, the IA also prays for the transfer of investigation in TRP Scam Case to CBI.

About the TRP Scam

According to the police, they had received a complaint in early October from Hansa Research, a company appointed by the Broadcast Audience Research Council or BARC, which installs "people meters" to track viewership. The company had said some former employees had shared details of the households being tracked and helped rig ratings.

Earlier, in October 2020, The Mumbai City Civil and Sessions Court had granted bail to Shirish Pattanshetty, the owner of Fakt Marathi, one of the channels accused in the Television Rating Point (TRP) scam case registered by Mumbai police.

It may be noted that the Bombay High Court in November 2020 heard the writ petition filed by Hansa Research Group against Mumbai police and officers of the crime branch for allegedly harassing them and trying to coerce them into making allegations against Republic TV in the investigation relating to TRP Scam along with the interim bail application of Arnab Goswami.