Truth Is A Valid Defence In Contempt Proceedings Only If It Is Bonafide And In Public Interest: SC [Read Judgment] 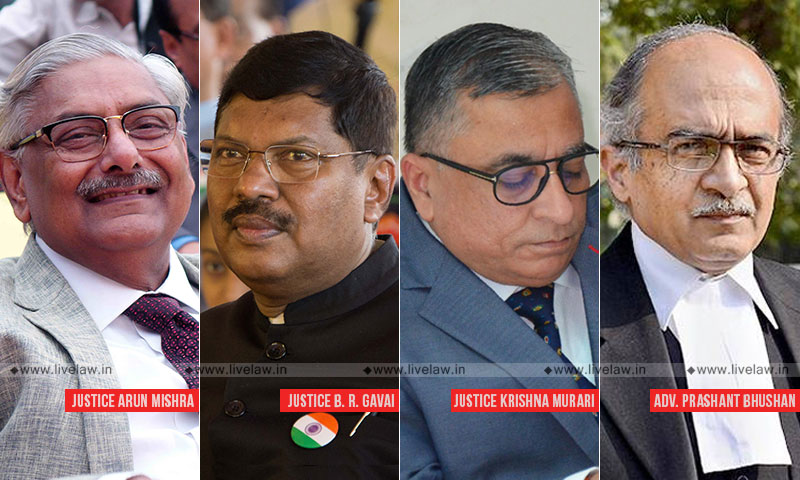 x
If the averments are considered for taking truth as a defence, it would amount nothing else but the aggravation of the contempt.

The Supreme Court has observed that, for considering the truth as valid defence in Contempt proceedings, there is a twin requirement which needs to be satisfied: that such a defence is in public interest and that the request for invoking the said defence is bona fide.

The sine qua non for considering the truth as a valid defence are that the Court should be satisfied that defence is in the public interest and the request for invoking the said defence is bona fide, said the bench comprising Justices Arun Mishra, BR Gavai and Krishna Murari while sentencing Advocate Prashant Bhushan to Rupees One Fine.

The Court said that the defense raised by Bhushan is neither bona fide nor in the public interest and thus it fails to clear the twin test.

The bench observed thus while addressing the contention raised by Bhushan's lawyer, Senior Advocate Rajeev Dhavan that defence of the contemnor had not been taken into consideration while convicting him for criminal contempt.

The Court said that, during the hearing, Senior Advocate Dushant Dave, who appeared for Bhushan, had not pressed the defence into service, there was no occasion to take the same into consideration. The bench said:

"We propose to examine the defence. However, before we do so, to put the record straight, it is necessary to mention that Shri Dave, learned senior counsel appearing for Shri Prashant Bhushan, while arguing on 05.08.2020, after reading few lines from the affidavit in reply upto paragraph stated that he would not go to the defence taken as reading of that would further malign the reputation of this Court"

The court further observed that Bhushan was very much present during the hearing when his lawyer made these submissions.

Truth As Defence If It Is Bonafide And In Public Interest

Observing thus, the bench proceeded to consider the defence taken by Bhushan in his reply affidavit. The Court noted that Section 13 of the Contempt of Court Act enables the Court to permit justification by truth as a valid defence in any contempt proceedings if it satisfied that such a defence is in the public interest and the request for invoking the defence is bona fide. It said:

The Court said that it endorses the view of Attorney General that the defence should be taken off the record as they are neither bona fide nor in the public interest and as such it fails to clear the twin test. It said:

One of the reasons why we hold so is that though the tweet is of two lines, the affidavit in reply refers to series of allegations made by the contemnor with regard to the functioning of a large number of retired as well as sitting Judges including the Chief Justices as to their role on the judicial as well as on administrative side. If the averments are considered for taking truth as a defence, it would amount nothing else but the aggravation of the contempt. . We are of the view that, in the circumstances, the defence taken cannot be said to be either in the public interest or bona fide one. On the contrary, it is more derogatory to the reputation of this Court and would amount to further scandalizing and bringing administration of justice in disrepute, in which the common citizen of this country has faith and approaches this Court as a last resort for getting justice.

Taking note of the other averments made in the reply affidavit, the bench further observed:

After going through the various averments made in the affidavit in reply for supporting truth as defence, we are of the considered view that the defence taken is neither in the public interest nor bona fide one, but the contemnor has indulged in making reckless allegations against the institution of administration of justice. As referred by the learned Attorney General the averments are based on political consideration, and therefore in our view cannot be considered to support the case of the contemnor of truth as a defence. . The allegations made are scandalous and are capable of shaking the very edifice of the judicial administration and also shaking the faith of common man in the administration of justice.

The following are some of the observations made in the judgment:

Fair Criticism Of Judgment Is Permissible, But Cannot Scandalize The Institution

Though there is a Freedom of Speech, freedom is never absolute because the makers of the Constitution have imposed certain restrictions upon it. Particularly when such Freedom of Speech is sought to be abused and it has the effect of scandalising the institution as a whole and the persons who are part of the said institution and cannot defend themselves publicly, the same cannot be permitted in law. Though a fair criticism of judgment is permissible in law, a person cannot exceed the right under Article 19(1)(a) of the Constitution to scandalize the institution.

The tweet has been made by the lawyer who has the standing of 35 years and who is involved in several public interest litigations. However, merely because a lawyer is involved in the filing of the public interest litigation for the public good it does not arm him to harm the very system of which he is a part. Though expectation from an ordinary citizen may be different, the duties and expectations that are expected from a lawyer of long standing are on higher side. An advocate cannot forget his ethical duty and responsibility and cannot denigrate the very system of which he/she is an integral part. Fair criticism is not to be silenced, but an advocate has to remind himself/herself, where he/she crosses the zone of propriety, and the Court cannot continuously ignore it, and the system cannot be made to suffer. When the criticism turns into malicious and scandalous allegations thereby tending to undermine the confidence of the public and the institution as a whole, such a criticism cannot be ignored.