In UAPA Cases The Process Itself The Punishment, It Stares Us In The Face In The Death Of Father Stan Swamy Without Trial: Justice Aftab Alam 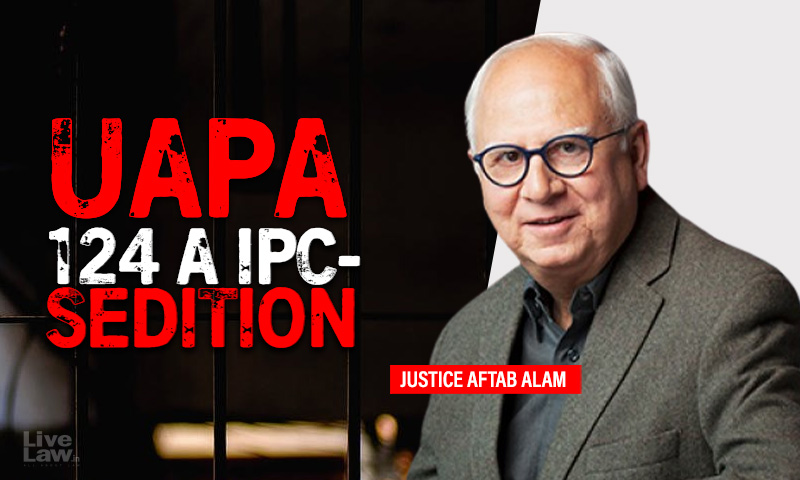 x
""Where has this draconian law in the world's largest democracy taken us? The results are all there for everyone to see. It stares us in the face in the death of Father Stan Swamy without a trial"

"The UAPA shows we are willing to rob our people of freedom far more than any other country without any accountability!", commented Justice Aftab Alam on Saturday.The former Supreme Court judge was speaking at a webinar by CJAR- "Discussion On DEMOCRACY, DISSENT AND DRACONIAN LAW- Should UAPA & Sedition Have A Place In Our Statute Books?"Justice Alam explained a performance audit of the...

"The UAPA shows we are willing to rob our people of freedom far more than any other country without any accountability!", commented Justice Aftab Alam on Saturday.

The former Supreme Court judge was speaking at a webinar by CJAR- "Discussion On DEMOCRACY, DISSENT AND DRACONIAN LAW- Should UAPA & Sedition Have A Place In Our Statute Books?"

Justice Alam explained a performance audit of the UAPA – from the perspective of the constitutional guarantees and national security- to see how the Act plays out in real life and impinges upon the former, in view of the low rates of conviction and the higher rates of pendency.

"The last report of the NCRB of 2019 depicts a conviction rate of 29% under the UAPA. But how is this conviction rate arrived at? In 2019, there were 2361 UAPA cases pending trial,113 were disposed off with conviction in 33 cases, acquittal in 64 and discharge in 16 cases. So 29% is the rate in terms of the cases disposed off in a single year. If examined against the total number of cases registered and total number of persons arrested, the rate of conviction comes at a more realistic figure of 2%! Equally important are the figures of 'Police Disposal rates' that refer to pendency of investigation. For UAPA cases the Report shows charge-sheeting rate at 42.5% and pendency rate at 77.8%

The lower rates of disposal and high rates of pendency, both at the investigation and trial stages, result in a situation where the case may finally fail but the accused has been in incarceration for 8 or 10 or 12 years. The case has no legs to stand on but the accused has suffered! So it is not incorrect to say that the process itself is the punishment!", elaborated the judge."

Pointing out that the NIA Act provides for a dedicated agency for cases which have a bearing on national security, Justice Alam urged that the instant issue needs more debate and accountability in view of this huge toll on constitutional freedoms; that at this point it may be worthwhile to ask a question from a purely national security angle- "Are these police disposal rates commensurate with dedicated legal framework which give extraordinary powers to investigating agencies and suspend several rights of accused? Are the results justified?"

The judge canvassed how after the 2008 Mumbai attacks took place, the UAPA was set to undergo the amendments of 2008, 2012 and 2019, making it more and more stringent- "It was an 'international attack' within the meaning of the UN resolutions. But the terror attack, apart from the devastation of killing of innocent people and massive destruction of property, also led, in an indirect and intangible way, to very harsh consequences for the country's justice system. Within a month of the attack, amendments were made in the UAPA Act which had far reaching consequences. In view of the definition of "terrorist act", the amendment made it possible for the investigating agency to extend the period of investigation to 180 days, during which the accused remains in detention, making it next to impossible to get bail"

Justice Alam cited an article which discusses how the amendment of 2008 was passed by the Parliament and how, ironically, its most stringent provisions were portrayed as a wonderful gift to the nation- "It was declared in the Parliament with great pride that our laws are tougher than that of America and England!

We have made a provision of 180 days under this law.  Can you give me an example of any other country where such laws exist?', it was asked! This was the speech in parliament in support of extending the period for filing the chargesheet and thus thee period of pre-charge detention from 90 days to 180 days. 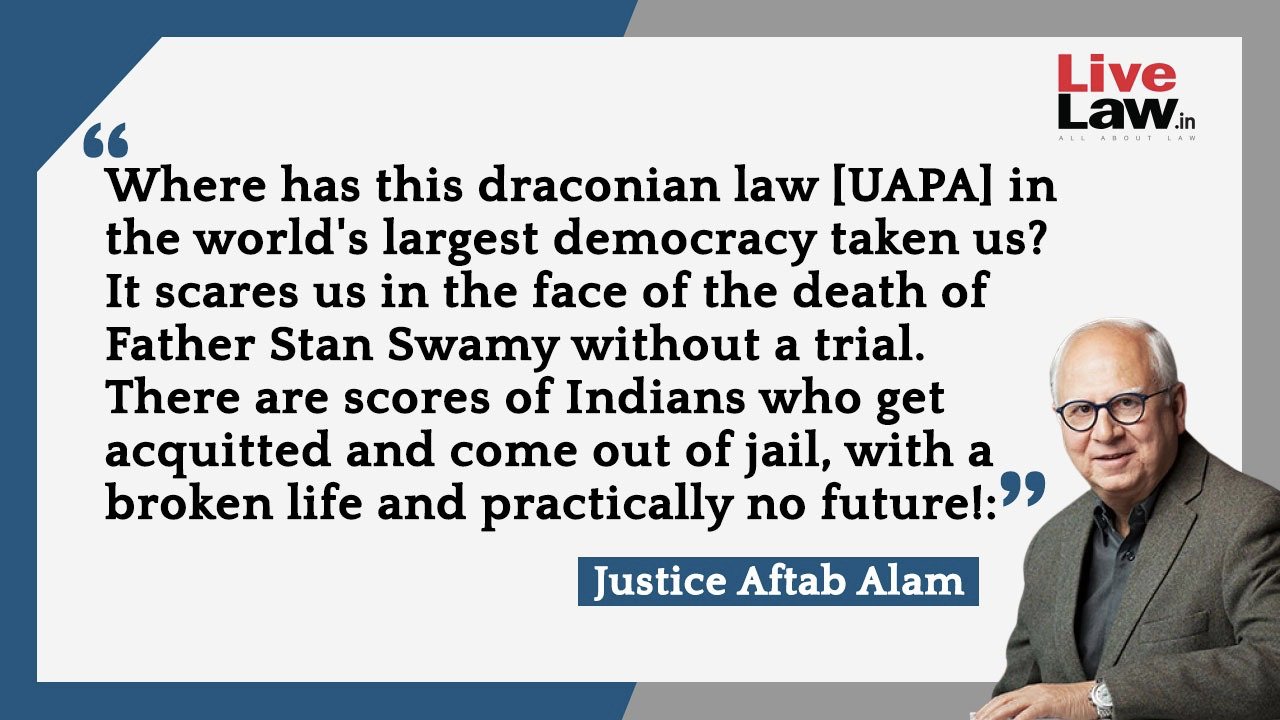 The judge continued to indicate that when in the aftermath of the London terror attack in 2010, the British Parliament sought to extend the time of detention for pressing charges from 14 days to 90 days, it was defeated by a resounding majority – it was called a travesty to life and personal liberty- "They settled on a period of 28 days, as a temporary measure to be reviewed annually, and it was to be brought back to 14 days in 2012"

"This begs the question: how does one define a strong State? One with rhetorical statements about national security, political debates and reduced accountability? Or one confirming to civil liberty and still managing to perform better? This really shows we are willing to rob our people of freedom far more than any other country without any accountability! What should have been a matter of acute embarrassment was being proclaimed as one of great pride! But that is the art of making dangerous laws!", articulated the judge

"Unfortunately, the matter didn't end with the amendments of 2008 but there were amendments in 2012 and 2019. Now an individual person can also be labelled as a terrorist without any prior hearing. NDPS, POCSO and PMLA, before their provisions were read down by the SC, also had similar provisions. However, these Acts still require an existence of a prima facie and specific case against the accused. This is where the UAPA stands out- the requirement is next to nothing to establish a case of unlawful or even terrorist activity! Something as trivial as having in one's possession a copy of a document can be treated as an evidence of supporting terrorism!", said the judge.

Justice Alam discussed how by a simple rearrangement in the classification of offences in the NCRB reports post 2014, the filing of certain types of cases is made completely neutral, while others are more politicised.

"It would seem from reading the most recent reports that terrorist violence, which prior to 2005 accounted for 3% of the total violence, has got centre-stage, while others have become irrelevant. Offences are now classified under the law under which they are booked. Caste and class or communal conflicts, which earlier accounted for 27%, no longer exist as a classification but are shown as 302, IPC. Terrorist offences are classified as offences under the UAPA and placed in the chapter dealing with offences against the State, together with offences like sedition, assertions/imputations prejudicial to national integration, Prevention of Damage to Public Property Act etc. So while lynching has become simply 302, there has been a progression from assertions prejudicial to national integration to damage to public property to sedition to terrorism", explained the judge.

Justice Alam said how this adversely plays out in a case where someone makes a perfectly peaceful speech, in good conscience, based on reason and good logic, citing legal and constitutional principles, calling out some actions of the government, and how the speaker finds himself accosted for terrorism and national security. Continuing down the chain of events, the judge showed how the speech could be followed by some people taking out a peaceful protest march, and some others taking out a march that is not so peaceful and where some public properties are damaged. As it may happen, some unlawful or terrorist organisation may also issue a statement in support of the cause. Someone may even throw a bomb killing a few people. "By virtue of the over broad definition of the UAPA, and this method of grouping of offences, all acts from throwing of the bomb to making of the speech will be treated as part of a single conspiracy! On the sliding scale of anti national activity, the speaker will find himself accused of terrorist acts! The grouping of violent terrorist acts, which earlier accounted of 3% of total violence, creates a totally new imagination of terrorism and national security which includes all manner of dissent and brings the problem of terrorism centrestage. This regrouping of the cases results in a situation where cases posing a more stringent threat to national security, which are no more than 3%, fail to get the focus!", exclaimed the judge.

"Where has this draconian law in the world's largest democracy taken us? The results are all there for everyone to see. It stares us in the face in the death of Father Stan Swamy without a trial. There are scores of Indians who get acquitted and come out of jail, with a broken life and practically no future! I submit that the UAPA has failed us on both counts- constitutional freedom and national security!", said the judge.

"In UAPA cases, the process itself is the punishment!", said Justice Alam .