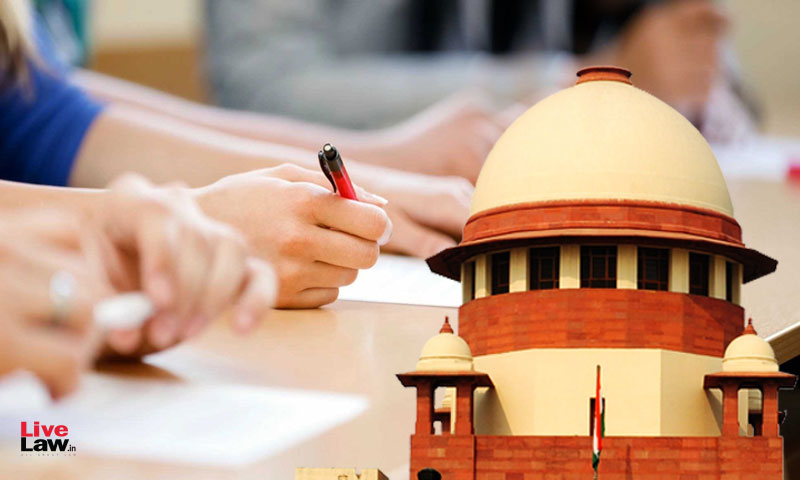 In response to the Counter Affidavit filed by the University Grants Commission before the Supreme Court today, the Petitioners Praneeth K and others have contended that the Commission has "miserably failed" to respond to the grievances raised by them.

They have filed an urgent rejoinder application, praying the Court to reject the Counter Affidavit filed by the Commission and to allow their petition challenging UGC Guidelines mandating conduct of examinations for final year students by September 30.

The Petitioners have submitted that the Commission has not properly responded to the specific contentions regarding flagrant violations of their fundamental rights enshrined within Articles 14 and 21 of the Constitution.

The University Grants Commission has told the Supreme Court that the direction to hold final year examinations by September 30 was issued to "protect the academic future of students".

Brushing aside this submission, the Petitioners have submitted that the UGC has failed to respond as to who will compensate the Petitioners for the Loss of Job Opportunities or Admissions Deadlines due to the belated completion of their final year exams by September 30, as compared to their predecessors, whose exams were completed by July 31.

#UGCGuidelines
Students file rejoinder to #UGC affidavit through @advocate_alakh. Says @ugc_india has failed to take into account many aspects like rising COVID19 cases, floods in Assam, lack of connectivity in J&K, lockdown in many parts etc.#StudentsInSCForJustice pic.twitter.com/ZeRTun18F1

It is contended that the UGC has overlooked the concerns of many students who have enrolled in foreign universities or have secured private jobs via campus placements, who are required to submit their degree certificates by July 31.

The Commission had also stated that conducting examinations for final year students is necessary to test them on "specialized elective courses" studied by them during the terminal year.

Responding to this the rejoinder filed through Advocate Alakh Alok Srivastava stated :

"Most courses now a days follow semester pattern, meaning thereby that subjects change every semesters. It effectively means that a final year/ final term student has already completed 85-90% of his/ her case and even studied the final semester. In such a case, there is no harm, if he/ she is awarded aggregate of previous semester marks. The same pattern is being followed by various foreign countries as well."

Premier institutions such as IITs & NLUs have done away with final year exams and have evaluated their final year students on the basis of past performance, they pointed out.

It is contended that conducting of examination amid the Covid crisis poses a massive threat to the life of the stakeholders, such as students, examiners, etc. and the UGC has failed to take into account the plight of students who will be constrained to travel across the country.

"Many states of India have already announced Complete Lockdown. Many big cities have several containment zones. Free movement of students will be restricted and will cause lot of harassment. And most importantly, there is non-availability of free Air/ Rail/ Bus/ Other Transport movement in many parts of the country," the rejoinder states.

Travel is also an uphill task for students residing in Assam, Bihar and North-Eastern States, areas that are hit by deadly incessant flood.

So far as the defence of online examination as pleaded by the UGC is concerned, the Petitioners have submitted that failed many parts of the county, including Rural areas and the UT of J&K where mobile internet bandwidth is limited to 2G network, suffer from poor internet connectivity. Further, the Commission has overlooked the possibility of Hacking/ Tampering with the result, Lack of Training, etc. with respect to the proposed online exams.

"Just 1/3rd of the whole Indian population has access to proper internet…Thus, conducting such examinations at through online mode, is nothing only but deprivation of majority (2/3rd) of the students from equal opportunity to appear in the said final year Examinations," the Rejoinder states.

"The Respondent UGC has failed to appreciate that then there would another set of students, who, due to their unwell health conditions or due to strong possibility of getting affected by COVID-19, may be deprived from appearing in their aforesaid final year examinations, which will be in flagrant violation of their fundamental right to equality, as enshrined within Article 14 of Constitution of India.

The Petitioner No. 1 has only two options, first is to appear in the upcoming exams and thus endanger his own life and/or lives of other participating students. Or, to abstain from appearing in the upcoming exam and thus delay the completion of his degree and hence lose precious Job/ Admission opportunities…UGC has shown complete apathy to the aforesaid plight of the Petitioner No.1."

It is therefore prayed that the final year students should be treated at par with the students of CBSE, ICSE, ISC, NIOS, ICAI or the students of Intermediate years/ semesters, and they be promoted on the basis of an alternate evaluation scheme; aggregate of previous semester exams be awarded to students.

UGC @ugc_india has overlooked the concerns of many students who have enrolled in foreign universities or have secured private jobs via campus placements, who are required to submit their degree certificates by July 31,says the students' rejoinder.#UGCGuidelines #UGC