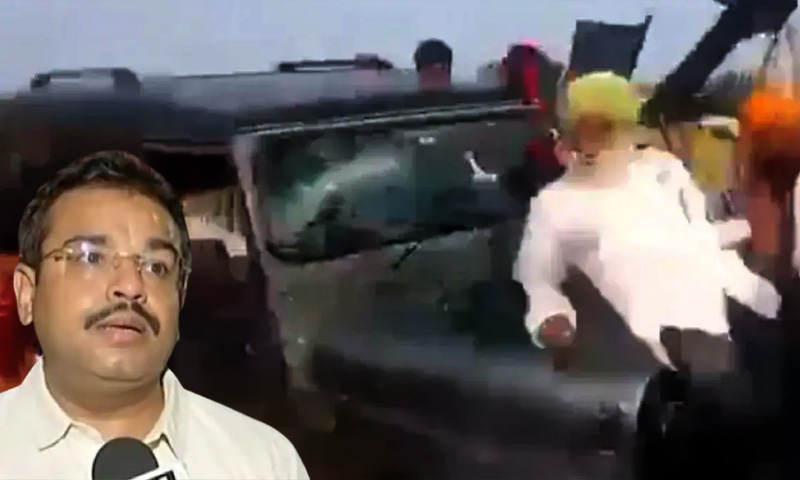 The Allahabad High Court today granted bail to Ashish Mishra, prime accused in the Lakhimpur Kheri violence incident. Mishra, son of Union Minister Ajay Kumar Mishra 'Teni', had moved the court after his bail plea was rejected by the Lower court.The matter in briefEssentially, a case was registered against Mishra for an incident that took place on October 3, when several farmers were...

Essentially, a case was registered against Mishra for an incident that took place on October 3, when several farmers were holding protests against the visit of Uttar Pradesh Deputy Chief Minister Keshav Prasad Maurya to Lakhimpur Kheri district, and four protesting farmers were killed after they were mowed down by an SUV.

Allegedly, the SUV was part of the convoy of Union Minister of State for Home Affairs and BJP MP Ajay Kumar Mishra (Ashish Mishra's father).

Thereafter, the police had filed a first information report against Ashish Mishra (son of minister Ajay Kumar Mishra) and several others in connection with the violence case under Section 302 IPC.

Arguments before the Court

Appearing for him, Senior Counsel GD Chaturvedi had argued that Mishra was not driving the car which allegedly mowed down farmers/protestors on October 3, 2021.

"In the postmortem report, no injury has been shown from the firearm to the alleged victims. Mishra was not driving the Thar, from which the protesters were allegedly mowed down," Senior Counsel Chaturvedi had argued.

It was further contended by his Counsel before the Bench of Justice Rajeev Singh that though he is pleading alibi, however, even if the prosecution's case is taken to be true, it has been alleged that Mishra was only sitting beside the seat of the driver of the Thar car, and he allegedly ran away after the alleged accident.

It had been further argued there appears to be no evidence on record that can prove that the driver of the car had mowed down the farmers on the orders of Mishra, and even if the act of mowing down the farmers is argued to be a deliberate act, then also it can't be said that Mishra is vicariously liable for the killing of the alleged protestors.

On the other hand, counsel for the complainant, Jagjeet Singh argued that the driver couldn't have mowed down the farmers if not for the orders of Mishra, since he is quite an influential person being the son of a Union Minister.

However, the complainant's counsel couldn't refer to any evidence in this regard. Lastly, when the Court was about to reserve the order in Mishra's bail plea, one correction application was filed by him, which has been allowed by the court.

In his bail plea, accessed by Live Law, Mishra had argued that he was not in his car when the said incident took place and rather, he was attending a Dangal function in village Banveerpur, which is 4 kilometers away from the place of the incident.

The bail plea further submits that his presence at the Dangal function is duly supported by the electronic record and mobile location.

Mishra has further contended that even if the prosecution's story is considered to be true, he had a right to self/private defence as contemplated under section 97/103 of IPC will be available to all the accused.

In this regard, the plea also avers that the Farmers assembled together in order to take revenge against the statement made by the father of the applicant as a result of which, the Sikh community consisting of Khalistan Terrorist Organisation established from the logo upon their shirts, coupled with the fact that they were armed with deadly weapons in order to display their anger captured the Helipad to show protest against the governmental functionaries.

"...they are aggressors by committing murder and causing grievous injuries to the persons sitting in the THAR vehicle, knowingly that the vehicle belongs to the father of the applicant and while coming from their home the persons sitting in the THAR vehicle had not acted in covert manner and the driver of the THAR vehicle after sustaining head injuries might have lost his mental equalibirium or might have acted in the right of private defence and thus, no criminal liability can be attributable against the applicant."

It has been further argued that the convoy of the accused including the 'Thar' car was attacked by an unlawful assembly formed by alleged protesting farmers and three persons sitting in the car were done to death. In this regard, Mishra has submitted had he been in the car at the relevant point of time, he must have also been done to death.

"...the vehicles were going to receive the Chief Guest in full speed and the obstruction of the public road at the end of so-called Kissans armed with deadly weapons was wholly unwarranted and also against the illegal act of forming of an unlawful assembly and the gathering of about 5000 people at one point of time at one place without taking permission from the district administration renders them liable for criminal activities to be visited with the punishment contemplated under the penal laws," the plea further states.

The plea also adds that the glass and windscreen of the vehicles in the convoy were broken up by the members of the unlawful assembly by deadly weapons and stones, etc. with an ulterior motive in order to take revenge under the assumption that Mishra was sitting in the Thar vehicle, though he was present in Dangal function at Banveerpur.

"...from the electronic evidence, it transpires that the offence of murder can never be attributable against any accused in the light of the exception due to sudden fight, sudden quarrel, heat of passion and without premeditation or in alternative exceeding the right of private defence, as contemplated under exception 2 and 4 attached to section 300 IPC."

Other developments in the case

The Uttar Pradesh Police on January 3 had filed a charge sheet in the Lakhimpur Kheri Violence case before a local Court in Lakhimpur naming Union Minister Ajay Mishra's son, Ashish Mishra as the prime accused.

It may be noted that in December, the Special Investigation Team of the Uttar Pradesh police that is probing the Lakhimpur Kheri violence incident had said before the Lakhimpur local Court that there was a planned conspiracy to kill the people present during the incident.

"It appears from the probe that has been conducted and material collected till now that the said act wasn't a negligent act committed by the accused, rather, it was done intentionally as per premeditated plan to kill...", the application filed by the SIT avers.

Further, the police had also prayed before the Court that Sections 304A (culpable homicide not amounting to murder), 279 (negligent driving), and 338 (causing grievous hurt) against all accused be removed and instead, Sections 307 (attempt to murder), 326 (causing hurt with dangerous weapon), 34 (acts done by several persons in furtherance of common intention), and 3/25 Arms Act be registered against them.