Unnao Girl Critical, SC Told; Family Given Liberty To Decide On Shifting Her To AIIMS; Transfer Of Road Crash Case To Delhi Stayed 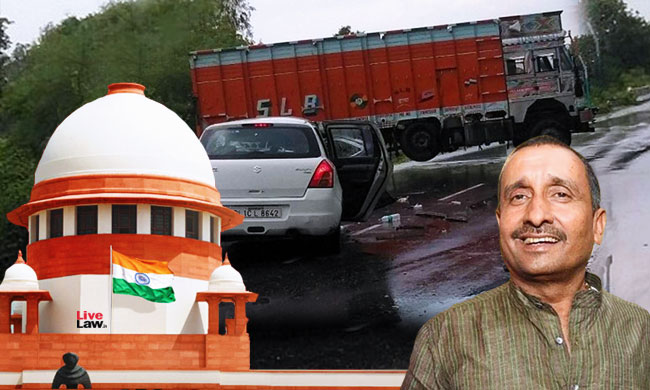 The teenage girl of Unnao who survived the road crash on July 28 is unconscious and continues to be on ventilator support, amicus curiae Senior Adovcate V Giri told the Supreme Court on Friday.The amicus also informed the Court that the girl's family was satisfied with the treatment at King George's Medical College Hospital, Lucknow. The bench comprising CJI Ranjan Gogoi, Justices Deepak...

The teenage girl of Unnao who survived the road crash on July 28 is unconscious and continues to be on ventilator support, amicus curiae Senior Adovcate V Giri told the Supreme Court on Friday.

The amicus also informed the Court that the girl's family was satisfied with the treatment at King George's Medical College Hospital, Lucknow.

The bench comprising CJI Ranjan Gogoi, Justices Deepak Gupta and Aniruddha Bose was informed that her lawyer, who was also injured in the accident, was taken off the ventilator but his condition is still critical.

The lawyer's father was indecisive on him being shifted to Delhi, the Supreme Court was informed.

The bench gave liberty to the family of the survivor and the lawyer to approach the Supreme Court's secretary general at any point for shifting them to AIIMS in Delhi.

Media restrained from divulging identity of the girl

Senior Advocate Giri also brought to the attention of the bench headed by Chief Justice Ranjan Gogoi that older photographs of the survivor and her family are being displayed by the media on all platforms. Taking note of this, the Court restricted the print and electronic media from divulging the identity of the Unnao rape survivor even indirectly.

The court further noted that, pursuant to its Thursday's order, the UP government has paid Rs. 25 lakhs by way of interim compensation to the survivor, and that the state has no objection to her uncle lodged in a jail in Rai Bareilly to be shifted to Tihar (who is charged with over a dozen offences, ranging from railway robbery to attempt to murder and has apprehended threat to his safety in Rai Bareilly) and issued the direction that he be immediately transferred, and that the survivor and her family have accorded CRPF protection.

On an urgent mention made by the Solicitor General Tushar Mehta afternoon, the bench modified the order passed on Thursday and held that the accident case will not be transferred to Delhi until the investigation is completed.

The Solicitor General submitted that since investigation was still in progress in that case, transfer to Delhi will create difficulties in the matter of remand, custody, bail etc., of those who may get named as accused in it. The CBI has been given maximum fourteen days time to complete the probe in the road crash case, which the family of the survivor alleges to be a planned attack to do away with the Unnao girl.

Yesterday, the SC had transferred four cases related to Unnao incident and the accident case from Lucknow to the Delhi and designated Dharmesh Sharma, District Judge, West, Tis Hazari Courts, Delhi as the trial judge.  Trial was directed to be completed within 45 days.

The CJI-led bench transferred the cases from CBI Court, Lucknow to Delhi in the suo moto proceedings based on the letter by family of Unnao rape survivor seeking protection from intimidation by accused. The mother of the survivor had approached the top court last April seeking transfer of trial outside Uttar Pradesh citing intimidation by accused.

The UP Government has been ordered to give Rs. 25 lakhs compensation to the survivor. The survivor, her family and her lawyer should be provided CRPF security, the Court added.

Sengar, a four-time MLA who represents Bangermau in the UP assembly, allegedly raped the teenage girl at his home in 2017. He was arrested on April 13, 2018, after the rape survivor held protests outside Chief Minister Yogi Adityanath's residence in Lucknow.