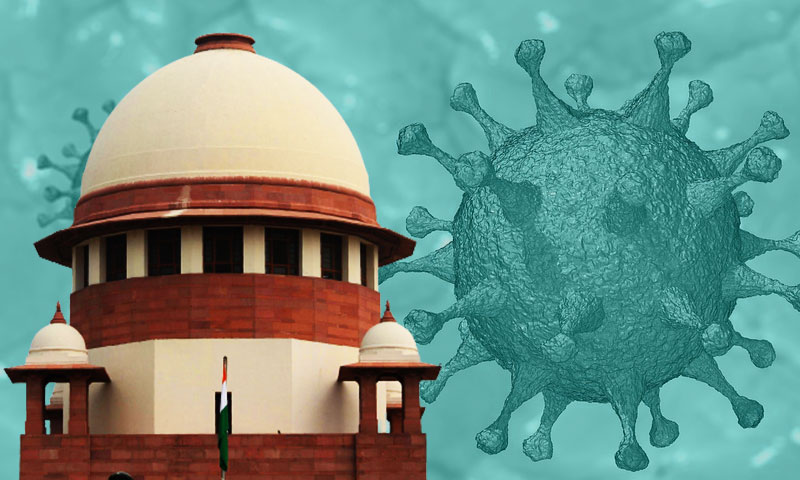 x
The Court directed the authorities to act immediately, without waiting for court orders.

The Supreme Court on Friday directed the district authorities under the Juvenile Justice Act to immediately upload information of children who have become orphans after March 2020, and immediately take charge of such children and attend to their basic needs without waiting for any further orders of this court.A division Bench of Justice Nageswara Rao and Justice Aniruddha Bose issued...

The Supreme Court on Friday directed the district authorities under the Juvenile Justice Act to immediately upload information of children who have become orphans after March 2020, and immediately take charge of such children and attend to their basic needs without waiting for any further orders of this court.

A division Bench of Justice Nageswara Rao and Justice Aniruddha Bose issued the direction while hearing its suo moto case 'In Re: Contagion of Covid in Children protection Homes'.

The Bench was hearing an application filed by the Amicus Curiae Mr Gaurav Agrawal seeking directions in respect of children who are adversely affected due to Covid pandemic by losing either one or both the parents, and the increased incidents of child trafficking specially of the girl child.

After hearing Amicus, the Bench also directed ASG Aishwarya Bhati appearing for Union of India and Counsels for states to get the latest information on identification of children orphaned, due to the pandemic or otherwise and steps taken for purpose of attending to their basic needs.

The Court has asked the State govt counsels to provide information that they receive latest by Sunday evening. The Court has made it clear that no affidavits need to be filed at this stage.

The court has further requested the Amicus to prepare a note after receiving information from State counsels, and circulate it by Monday evening.

"ASG Bhati and Counsel for NCPCR have submitted that all concerned district authorities may be directed to upload information mentioned above immediately or latest by tomorrow evening for purpose of gathering statistics of children orphaned in pandemic", the Bench noted.

The Bench noted that it has been brought to its knowledge that there are large number of children who have become orphans either due to death of both parents or the bread winner of family. The Amicus has shared his concern for well being of these children, which has to be attended to at the earliest.

Court noted that the Union of India has already issued instructions to the concerned authorities regarding the steps to be taken for protection of children who have lost their parents due to covid.

The Bench further noted that the Provisions of Juvenile justice Act 2015 make it clear that there's an obligation on the part of the authorities to ensure that the children in need have to be taken care of by following procedure.

After AAG Garima Prashad, appearing for State of UP, informed the court that Supreme Court's Juvenile Justice Committee also held a meeting and addressed these issues, the Bench stated that it will not pass duplicate orders and will only ask district authorities to upload the information.

Submissions of the Amicus:

The Amicus Curiae Gaurav Agrawal informed the court that NCPCR had taken cognisance of this issue in April as there were reports that child orphans were being adopted illegally and came out with a standard operating procedure as to how children who've lost both or even one parent have to be dealt with by state authorities. The SOP lays down provisions of Juvenile Justice Act under which they have to dealt with under section 2 (14) ( Children in need of care and protection)

Agrawal added that NCPCR has also set up web portal whereby the state authorities have to put in the data regarding children and steps taken by them for rehabilitation, etc. Since its a commission which is a guidance or recommendatory body, these SOPs are now to be implemented by state authorities which is why the application has been moved.

Adv Agrawal further informed the Court that the subject matter of the application are three kinds of children, including those who have lost both parents or guardians. He emphasised that 'guardian' here is important as in some cases parents may have already died earlier.

Agrawal stated that it also includes those children who have lost parent or guardian who was earning member of family, thereby leaving them with no means of sustenance.

"What are other provisions in act pertaining to the function and responsibilities Today for the purpose of your application we are not concerned with children in conflict with law, but only with children in need of care." the Bench said.

After referring to relevant provisions of the Juvenile Justice Act and Juvenile Justice care and protection Model Rules, 2016 Agrawal submitted that its important that district official under state authorities suo moto take action to identify such vulnerable children.

In response to the Court's query regarding the District task force he has mentioned in his application, Agrawal stated that it is an adhoc body that he has recommended.

He added the aspect of quick Identification needs to be addressed. Further, while the Act contemplates production of children before CWC in 24 hours, there are other needs like food, etc which would need immediate attention. He suggested that the District administration could come together and figure out and the children could be taken care of.

Submissions on Behalf of Union of India:

ASG Aishwarya Bhati appearing for the Union of India informed the court about the steps taken by the Union in this regard. She stated that advisories have been issued, and the advisory is specifically in category of orphans, single parent, abandoned or seemingly abandoned.

With regards to production of child within 24 hours, ASG Bhati submitted that to advisory itself has been modified to extent that Wherever physical production not possible virtual production can happen.

Further, instructions has been issued that One Child Care Institute in each district has to be earmarked for these children. This has been done anticipating that number of children under definition of Act requiring care and protection would be large number.

Bhati also submitted that when patient is getting admitted, it has to be mentioned what would happen to their children in event of eventuality.

She added that there are Tele medicine services that have been made available with help of doctors for both physical and mental health care and to both children care homes and the staff.

"Give us the figures of children who've lost parents, both as well as one. Please find out number and what is it that states have done under the act & if they've been attended to immediately. If they haven't, please instruct officials to start identifying these children." The Bench said.