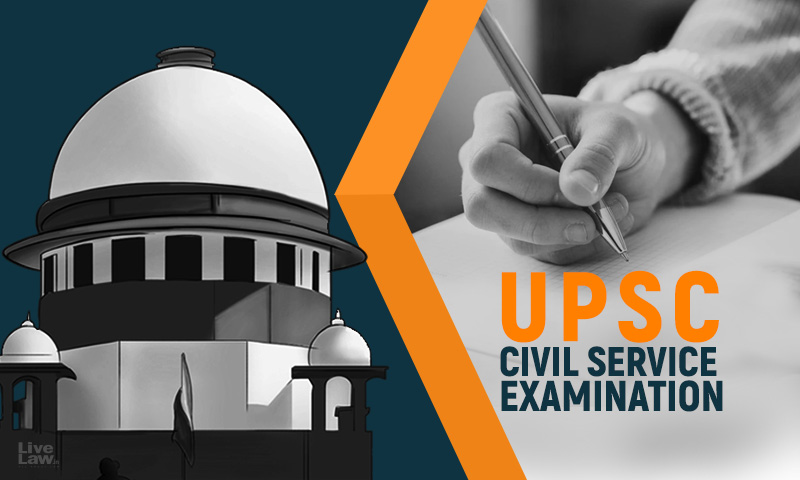 A group of twenty-eight civil services aspirants, who could not appear in the UPSC exam held in October 2020, have approached the Supreme Court by filing a writ petition seeking an extra attempt this year. These are candidates who had the last attempt in 2020 but could not appear in the exams held in October 2020 due to "exceptional circumstances" created by the COVID-19 pandemic.On April 19,...

A group of twenty-eight civil services aspirants, who could not appear in the UPSC exam held in October 2020, have approached the Supreme Court by filing a writ petition seeking an extra attempt this year. These are candidates who had the last attempt in 2020 but could not appear in the exams held in October 2020 due to "exceptional circumstances" created by the COVID-19 pandemic.

On April 19, a division bench comprising Justices AM Khanwilkar and Dinesh Maheshwari asked the petitioners to serve the advance copy of the writ petition on the Standing Counsel of the Union Public Service Commission(Case :Abhishek Anand Sinha and others vs Union of India and others, WP(c) 434/2021). The case is next posted on July 8, 2021.

The petitioners have said that due to restrictive protocols and guidelines such as mandatory quarantine, containment zone regulations etc., they could not appear in the UPSC exam held on October 4, 2020. Therefore, the petitioners lament that they lost their last attempt due to circumstances beyond their control.

In the said writ petition, a group of candidates, who had appeared in their last attempt exam in October 2020, have filed an intervention application. They seek an extra chance by saying that their preparations for the highly competitive civil services exams were badly affected due to the problems created by the pandemic and the lockdown. Some of them were called upon to do medical duties as 'COVID Warriors'.  Some of them had to due to essential services during the COVID pandemic. Some others were under bereavement due to the loss of their family members due to COVID and some others were battling anxiety and depression due to loss of livelihood due to the lockdown. It is said that they were constrained to appear in the October 2020 exam as it was their last attempt, despite the fact that they were suffering from physical exhaustion, emotional stress and mental trauma on account of COVID.

The extra attempt, if given, will benefit 10,336 aspirants who had their last attempt in 2020, who are merely 0.97% of applicants enrolled, the petitioners say.

The petitioners are aggrieved that the UPSC did not consider the plight of last-attempt candidates while issuing the exam notification for 2021 in March this year. The exams, which were originally scheduled on June 27, have been postponed to October 10, 2021 on account of the second wave of COVID-19 pandemic.

Earlier plea for extra-attempt rejected by the Supreme Court

In February this year, the Supreme Court had dismissed a writ petition which sought extra-chance for candidates who had exhausted their last attempt in October 2020(Rachna and others vs Union of India and others). That was a petition filed by a group of aspirants, who had appeared in the October 2020 exam, which was their last attempt. The petitioners had pleaded for an extra attempt by saying that COVID-19 pandemic and the national lockdown had affected their preparations.

A bench led by Justice AM Khanwhilkar dismissed the petition by saying that the Court has limitations in interfering with the policy decisions of the executive. The bench also observed that granting an extra-chance to few candidates may have a "cascading effect" on exams in other streams.

However, during the oral hearings, the bench had repeatedly urged the Centre and UPSC to take a favourable stand towards the petitioners by reconsidering its stance. The bench had suggested that extra-attempt can be given without relaxing the age-bar.  But when the Union reiterated that extra chance cannot be given, the Court accepted it, saying that it was a matter within the policy domain of the executive.

Initially, the Centra and the UPSC had told the court that they have agreed to grant a "one-time, restricted relaxation to prospective candidates" who had given their last attempt of the UPSC exam in October 2020, and were not age-barred.

However, the Centre and the UPSC changed their stand later, after the petitioners argued that the age-bar should also be relaxed.

In September 30, the Supreme Court had directed the Central Government and the Union Public Service Commission to consider granting an extra chance to candidates who otherwise have their last attempt in 2020, with corresponding extension of the upper age-limit.That direction was given by a Bench led by Justice Khanwilkar in the case Vasireddy Govardhana Sai Prakash v UPSC while rejecting the petitioners' plea to postpone the UPSC exams scheduled in October 2020 in view of the COVID19 pandemic.