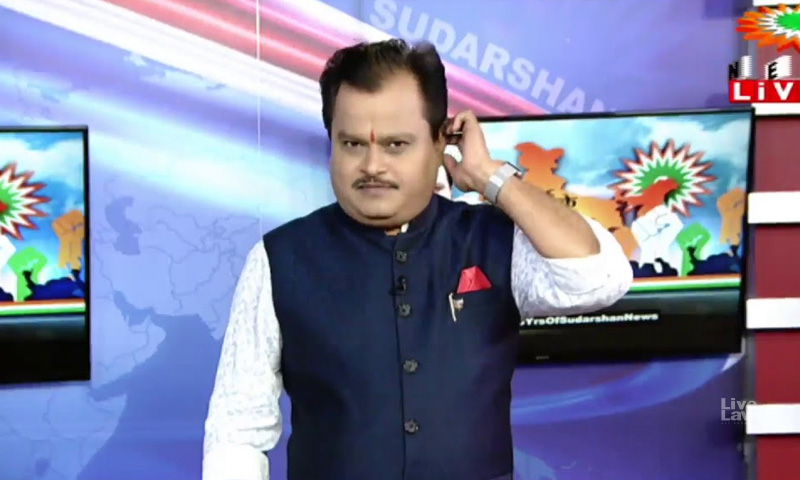 The Central Government on Monday informed the Supreme Court that the Inter-Ministerial Committee(IMC) has made some additional recommendations with respect to the Sudarshan News TV channel, which is facing complaints of propagating communal hatred over its show 'Bindas Bol' about the entry of Muslims into All India Civil Services.Earlier, the Union Ministry of Information and Broadcasting...

The Central Government on Monday informed the Supreme Court that the Inter-Ministerial Committee(IMC) has made some additional recommendations with respect to the Sudarshan News TV channel, which is facing complaints of propagating communal hatred over its show 'Bindas Bol' about the entry of Muslims into All India Civil Services.

Earlier, the Union Ministry of Information and Broadcasting had served notice to the channel over complaints of violations of the program code under the Cable TV Network Regulation Act.

Yesterday, a letter seeking adjournment was circulated by the Union of India, and a Bench comprising of Justices DY Chandrachud, Indu Malhotra and Indira Banerjee allowed the same today.

The letter circulated states that, as the Bench had been informed, the Union of India, in exercise of its power conferred upon the Central Government under Section 20(3) of the Cable Television Networks (Regulation) Act, 1995, had already issued a notice to Show Cause on 23.09.2020 to Sudarshan News, and the same was returnable on 28.09.2020.

In pursuance of the Notice, a Reply was received from Sudarshan News and the same was forwarded to the Inter-Ministerial Committee for its views and recommendations. The IMC then conducted its proceedings wherein Sudarshan News was given full opportunity to represent their case by filing written submissions as well as by making oral arguments.

Post the proceeding, the IMC gave some additional recommendations to the Central Government on 04.10.2020 in respect of some programs which are yet to be telecasted by Sudarshan TV News channel. The letter states that the "Competent Authority of the Central Government, is therefore, duty bound to give one more opportunity to Sudarshan TV News Channel, to make its representation on the recommendation given by the Inter-Ministerial Committee in general and in particular with respect to the additional recommendation made by the Inter-Ministerial Committee in respect of the future program".

In light of the above, another notice has been issued by the Central Government to Sudarshan News.

"The respondent Union of India respectfully submits that the said process is on-going and is at an advanced stage. It is stated that it is only after giving Sudarshan TV News Channel a final opportunity of hearing, the Central Government would be in a position to pass an order under sub-section 3 of Section 20 of the Cable Television Networks (Regulation) Act, 1995".

In today's hearing, Solicitor-General Tushar Mehta informed the Bench that a show cause notice had been issued to Sudarshan News today and the hearing for the same would take place tomorrow.

Accordingly, the Bench adjourned the matter to 26th October, 2020.

Advocate Shadan Farasat, appearing for an intervenor in the matter, submitted to the Court that the Bench had to decide the difference between hate speech and offensive speech, irrespective of the decision taken by the Central Government in the instant matter.

The matter will now be heard on October 26.

In the previous hearing on 23rd September, the Supreme Court had adjourned the hearing to allow the channel to respond to the show-cause notice issued by the Central Government to it to explain the apparent violations on its part.

The restraint on the telecast of the remaining episodes of the show, imposed as per the interim order passed on September 15, will continue to remain in force, the bench clarified today.

The SC stopped the telecast of the shows after making a prima facie observation that the object and the purpose of the show were to vilify the Muslim community.