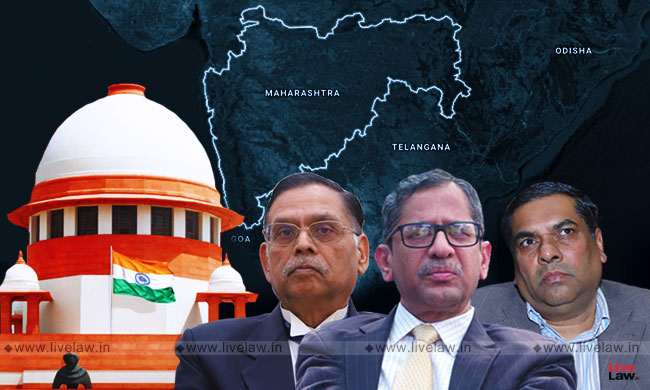 "Undemocratic and illegal practices within the political arena should be curtailed"

In its order passed today in the petition filed by Shiva Sena, the Supreme Court observed that it has ordered urgent floor test tomorrow to curtail unlawful practices such as horse trading and also to avoid uncertainty and to effectuate smooth running of democracy by ensuring a stable Government

In a situation wherein, if the floor test is delayed, there is a possibility of horse trading, it becomes incumbent upon the Court to act to protect democratic values. An immediate floor test, in such a case, might be the most effective mechanism to do so, the bench of Justices NV Ramana, Ashok Bhushan and Sanjiv Khanna said in the order.

The bench said that the issues of maintainability, extent of judicial review and validity of the Governor's satisfaction, are important constitutional issues touching upon the democratic bulwark of our nation and will be heard at appropriate time. The preface of the order read thus:

There is no gainsaying that the boundaries between the jurisdiction of Courts and Parliamentary independence have been contested for a long time. However, there is a need and requirement for recognizing institutional comity and separation of powers so as to tailor judicial interference in the democratic processes only as a last resort. This case pertains to one such situation, wherein this Court is called upon to adjudicate and maintain democratic values and facilitate the fostering of the citizens' right of good governance.

The bench also also dealt with the contention by Solicitor General Tushar Mehta that it cannot monitor the proceedings of the House as per the provision of Article 212 of the Constitution. It was also contended by Senior Advocate Mukul Rohatgi that the Court cannot sit in appeal over the Governor's order to set the dates for the floor test. In this regard, the bench observed:

"Ex facie, Article 212 of the Constitution, relied on by the Respondents, would have no application as it relates to validity of proceedings in the Legislature of a State that cannot be called in question in any court on the ground of any alleged irregularity of procedure. Clause (2) states that no officer or member of the legislature of a State, in whom powers are vested by or under the Constitution for regulating the procedure, conduct of business or for maintaining order, in the Legislature shall be subject to the jurisdiction of any court in respect of exercise of those powers by him. Sub-Article (2) has no application because no act of any officer or member of the Legislature of the State has been made the subject matter of the present Petition before this Court. "

It also referred to the judgment in SR Bommai v. Union of India, (1994) 3 SCC 1 in which it was observed that wherever a doubt arises whether the Council of Ministers has lost the confidence of the House, the only way of testing it is on the floor of the House. Referring to recent judgment delivered in the matter of disqualification of some Karnataka MLAs by the speaker, the bench further said:

"This Court had emphasized the requirement of imbibing constitutional morality by the constitutional functionaries. Undemocratic and illegal practices within the political arena should be curtailed"