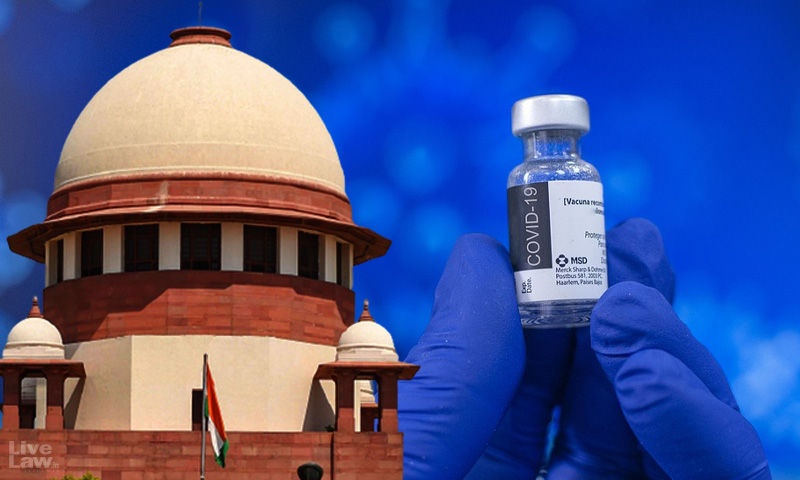 The States of Tamil Nadu, Maharashtra and Madhya Pradesh on Tuesday justified the government orders which mandated the taking of COVID vaccines to avail public utilities and access public places.A bench comprising Justices L Nageswara Rao and BR Gavai was hearing a writ petition filed by Dr.Jacob Puliyel, a former member of the National Technical Advisory Group on Immunisation, seeking the...

The States of Tamil Nadu, Maharashtra and Madhya Pradesh on Tuesday justified the government orders which mandated the taking of COVID vaccines to avail public utilities and access public places.

A bench comprising Justices L Nageswara Rao and BR Gavai was hearing a writ petition filed by Dr.Jacob Puliyel, a former member of the National Technical Advisory Group on Immunisation, seeking the data of clinical trial and adverse effects of COVID vaccines and challenging the vaccine mandates imposed by some States. Earlier, Advocate Prashant Bhushan had argued for the petitioner that vaccines cannot be mandated without a clear demonstration that the unvaccinated people pose a health risk. The Court had earlier observed that it will examine if vaccine mandates are proportionate to personal liberty.

Appearing for the State of Tamil Nadu, its Additional Advocate General Amit Anand Tiwari submitted that the State Government has mandated vaccination for accessing public spaces. "This mandate is in larger public interest. It is to provide security from higher outbreak", he submitted.

Mr.Tiwari referred to the notifications issued by the Union Ministry of Health and Family Welfare asking States to ensure 100% vaccination of the population(Later, the Solicitor General clarified that the Government of India has not made vaccine mandatory and that it was an advisory to encourage vaccination).

The State Government derived the power to impose the vaccine mandate from the Tamil Nadu Public Health Act, 1939 and the Disaster Management Act, 2005. Reference was also made to expert reports which state that unvaccinated people are the cause of mutation of viruses.

The mandate was justified on three broad reasons :

a. It prevents mutation

"In the second wave we saw the hospitals were flooded. The State did not have the infrastructure to cater. It has an economic impact on the State. More the number of people vaccinated lesser the chance of infection. I have placed reports on record. It shows where more people have been vaccinated the number of infection has gone down. When you are vaccinated, the likelihood of your hospitalisation is also lower.", Mr.Tiwari submitted.

He also distinguished the New Zealand judgment in the case Yardley v. Minister for Workplace Relations and Safety [2022] NZHC 291, on which reliance was placed by the petitioner saying that it had struck down a vaccine mandate.

Mr.Tiwari submitted that the said judgment related to the termination of a person from employment on the ground that he was not vaccinated. It was in that context it was held that the mandate was disproportionate. However, in the instant case, the mandate is only restricting entry to public places, and hence the said judgment is not comparable.

'No Person Can Be Forcibly Vaccinated Without Consent; Hasn't Made Carrying Vaccine Certificate Mandatory For Any Purpose' : Centre Tells Supreme Court

Advocate Rahul Chitnis, appearing for the State of Maharashtra, submitted that the Government has mandated vaccination to enter shops, malls etc., and also to avail public transportation. Referring  to the doctrine of proportionality elucidated in Modern Dental College And Research Centre And Ors. v. State of Madhya Pradesh case, he submitted that the mandate was a reasonable restriction fulfilling the tests of proportionality.

He also refuted the submission that the mandate is manifestly arbitrary and hence violative of Article 14 as it is a measure to protect the right to life of the people under Article 21.

"This imposition is important to even protect the life of the petitioner. Especially when it might affect others. Rights have to be balanced. State would be justified in protecting larger number of people", Mr.Chitnis submitted.

The counsel for the State of Madhya Pradesh adopted the submissions made by the Solicitor General of India regarding the need to balance the rights in the context of vaccination.  The counsel also submitted that the notification should not be understood as making vaccines mandatory to avail rations.

"The purpose of the notification was to inspire and motivate people to get both the dose of COVID-19 vaccine for their own safety", the counsel submitted. In any case, the notification has been subsequently revoked.