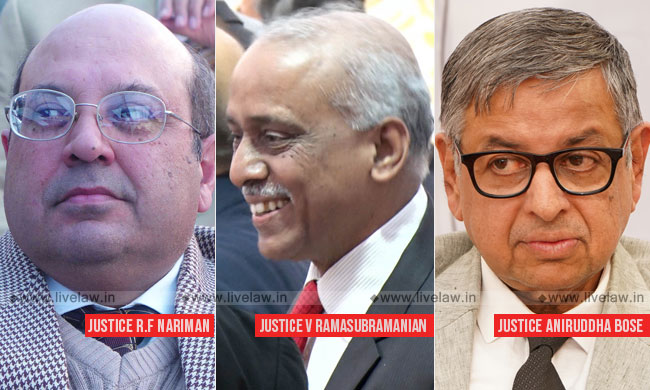 Taking a different view from an earlier judgment, the Supreme Court has held that venue of arbitration will be the juridical seat of arbitration in the absence of contrary intention of the parties.A three-judge bench comprising Justices R F Nariman, Aniruddha Bose and V Ramasubramanian held so on December 10, 2019, overruling the view expressed in a 2018 decision in the case Union of...

Taking a different view from an earlier judgment, the Supreme Court has held that venue of arbitration will be the juridical seat of arbitration in the absence of contrary intention of the parties.

A three-judge bench comprising Justices R F Nariman, Aniruddha Bose and V Ramasubramanian held so on December 10, 2019, overruling the view expressed in a 2018 decision in the case Union of India vs. Hardy Exploration and Production (India) INC. Notably, the decision in Hardy Exploration was also given by a co-ordinate bench of three judges.

In Hardy Exploration, the SC observed that place of arbitration does not iposo facto become the seat of the arbitration and that a venue can become a seat "if something else is added to it as a concomitant".

Holding this view to be incorrect, the SC in the present case observed :

"It will thus be seen that wherever there is an express designation of a "venue", and no designation of any alternative place as the "seat", combined with a supranational body of rules governing the arbitration, and no other significant contrary indicia, the inexorable conclusion is that the stated venue is actually the juridical seat of the arbitral proceeding (para 63)"

The case arose out of a contract signed between NHPC Limited and its contractor, BGS SGS SOMA JV.

The contract had an arbitration clause which stated that the "arbitration proceedings shall be held at New Delhi / Faridabad".

When disputes arose between NHPC and JV, arbitration proceedings were commenced in New Delhi. Award was passed in Delhi in JV's favour.  Challenging this, NHPC filed an application under Section 34 of the Arbitration Act before the Faridabad District Court.

Pointing out that Faridabad was not the appropriate jurisdiction, JV filed an application under Section 151 read with Order VII, Rule 10 CPC and Section 2(1)(e)(i) of the Arbitration Act, seeking the return of the Section 34 application to the appropriate court in New Delhi.

This application was allowed ordering return of the same from Faridabad to the appropriate court in New Delhi.

Aggrieved by this transfer order, NHPC filed an appeal under Section 37 of the Arbitration Act before the Punjab and Haryana High Court.

The HC held that appeal against the transfer order was maintainable under Section 37. It was further held that New Delhi had no exclusive jurisdiction as it was not the "seat of the arbitration" and was a mere "venue of convenience". Since a part of cause of action had arise at Faridabad, the HC held that Section 34 proceedings can be maintained there, ruled the HC.

JV approached the SC against this order of the HC.

At the outset, the Court held that Section 37 appeal was not maintainable in HC against the 'transfer order', as it was not an order passed under Section 34 of the Arbitration and Conciliation Act.

Moving on to the issue of venue/seat, the SC referred to the 5-judge bench decision in the 2012 case Bharat Aluminium Co v Kaiser Aluminium Technical Service, Inc (BALCO case).

In Paragraph 96 of the BALCO decision, the SC had observed that the courts at the seat of arbitration and the places of cause of action will have concurrent jurisdiction.

But the SC in the present case observed that this paragraph was not in consonance with the other observations in BALCO case. The BALCO judgment had even accepted the proposition laid down in the English judgment in Roger Shashoua v Mukesh Sharma, [2009] EWHC 957 (Comm) that the Court at seat of arbitration will have exclusive jurisdiction.

Therefore, reading down paragraph 96 of BALCO, the SC observed :

"If, therefore, the conflicting portion of the judgment of BALCO (supra) in paragraph 96 is kept aside for a moment, the very fact that parties have chosen a place to be the seat would necessarily carry with it the decision of both parties that the Courts at the seat would exclusively have jurisdiction over the entire arbitral process(para 51)".

When the contract say that the arbitral proceedings "shall be held" at a particular place, it signifies the intention to make the place a seat.

The Court also referred to the recent SC decision Brahmani River Pellets Ltd v Kamachi Industries Ltd, which held that only the HC at the 'venue' or arbitration has jurisdiction to entertain requests for appointment of arbitrator.

The Court observed that the Three Judge Bench in Hardy Exploration and Production failed to apply the Shashoua principle to the arbitration clause in question.

"Had the Shashoua principle been applied, the answer would have been that Kuala Lumpur, which was stated to be the "venue" of arbitration proceedings, being governed by the UNCITRAL Model Law, would be governed by a supranational set of rules, and there being no other contrary indicator, it would be clear that Kuala Lumpur would therefore be the juridical "seat" of the arbitration (para 93)", the Court observed.

"The decision in Hardy Exploration and Production (India) Inc. (supra) is therefore contrary to the Five Judge Bench in BALCO (supra), in that it failed to apply the Shashoua principle to the arbitration clause in question. The Hardy Exploration and Production (India) Inc. (supra) decision would lead to the result that a foreign award would not only be subject to challenge in the country in which it was made, but also subject to challenge under Section 34 of Part I of the Arbitration Act, 1996, which would lead to the chaos spoken of in paragraph 143 of BALCO (supra), with the concomitant risk of conflicting decisions, as held in Venture Global Engineering (supra) [overruled in BALCO (supra)], which would add to problems relating to enforcement, and undermine the policy underlying the New York Convention and the UNCITRAL Model Law.

We, therefore, declare that the judgment in Hardy Exploration and Production (India) Inc. (supra), being contrary to the Five Judge Bench in BALCO (supra), cannot be considered to be good law (para 96)".

Coming to the facts of the case, the Court held that New Delhi was the 'seat of the arbitration' as the proceedings were commenced and concluded there. So, the courts at New Delhi will have exclusive jurisdiction.

"The arbitration clause in the present case states that "Arbitration Proceedings shall be held at New Delhi/Faridabad, India…", thereby signifying that all the hearings, including the making of the award, are to take place at one of the stated places. Negatively speaking, the clause does not state that the venue is so that some, or all, of the hearings take place at the venue; neither does it use language such as "the Tribunal may meet", or "may hear witnesses, experts or parties". The expression "shall be held" also indicates that the so-called "venue" is really the "seat" of the arbitral proceedings. The dispute is to be settled in accordance with the Arbitration Act, 1996 which, therefore, applies a national body of rules to the arbitration that is to be held either at New Delhi or Faridabad, given the fact that the present arbitration would be Indian and not international. It is clear, therefore, that even in such a scenario, New Delhi/Faridabad, India has been designated as the "seat" of the arbitration proceedings".