Virtual Hearing Can't Be A Norm; Rights Of Public To Have Open Court Can Be Protected By Live-Streaming : Supreme Court 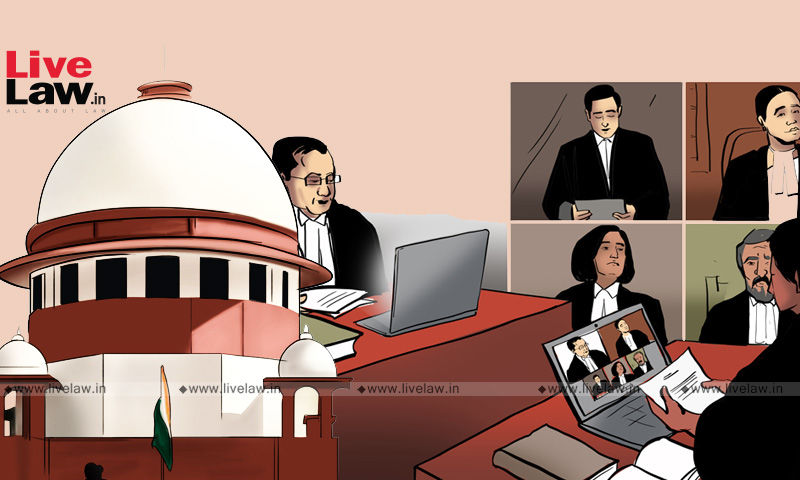 The Supreme Court on Friday orally remarked that virtual hearing cannot be a norm, as it was adopted to meet the extraordinary crisis created by the COVID pandemic. The Court also commented that it is one thing to say that the public has right to witness the court hearings through live stream and another thing to say that they should have the right to have "virtual hearings".

A Bench of Justice L.Nageshwara Rao and B.R.Gavai was hearing a writ petition which sought for the retention of the hybrid options for physical and virtual hearings in courts saying that it enhanced the right to access justice. The writ petition seeking "virtual hearing" as a fundamental right was jointly filed by ex-IPS officer Julio Ribeiro, RTI activist Shailesh R. Gandhi and an organization named "National Federation of Societies for Fast Justice".

Senior Advocate Manoj Swarup, for the petitioners argued for the retention of hybrid options for physical and virtual hearing in courts.

At the onset Justice L.Nageswar Rao asked if Counsel had seen the SOP issued last night mandating physical hearings two days per week and whether it was the argument that the SOP be set aside.

To which Justice Rao quipped: "These distinguished citizens should be told about the fundamental principles of open courts and open justice. We want courts to be open to the public and justice to be open."

"It is one thing to say that there should be telecast of the proceedings, Justice Rao continued, "it is another thing to say that even after we get rid of COVID hopefully that this institution should be closed down because virtual hearing is a fundamental right."

Continuing, Justice Rao said: "For the past two months we have made physical hearings optional and we have not seen one advocate in court on most of the days. Because given an option people are very comfortable in their offices".

Senior Advocate Swarup submitted that the petition was not form the lawyer's point of view but from citizens of the country.

Justice Rao intervened to mention that virtual hearing would not provide access to clients also.

"Do you envisage that the building in which we are sitting would be closed because that would be result of virtual hearing becoming a norm."

In jest Justice Gavai wondered if hybrid option is sought so that judges sit in the courtroom and lawyers can argue from Mussoorie, London, Goa and Mukteshwar, etc.

Justice Rao further expressed that for 70 years we have understood courts to be functioning from physically from particular places."In view of an unprecedented crisis courts had to continue virtually because people cannot be denied access to justice. This cannot become a norm where citizens are saying that virtually we have a right".

The judge further said that the right of the public (to witness court hearings) will be protected once the directions in the Swapnil Tripathi judgment for live-telecast are implemented.

"In any event their rights are protected if the judgement of this court is implemented and there is telecast of the proceedings. But to argue that virtual proceedings are needed to protect their rights doesn't appear reasonable. They want access to justice… it means sitting in hometown and watching the proceedings" Justice Rao continued.

To which Justice Rao asked: "In how many cases parties in person are addressing us? We have one to two persons in a month."

Mr.Swarup further submitted that virtual proceedings allow citizens to access justice at a much lesser cost. Relying on Anita Khuswaha vs Pushap Sudan case of 2016, SA Swarup argued that access to justice is a part of Right to Life under Art.21. He further submitted that other judgements of the Court have indicated imposing an unwavering requirement of physical presence to the exclusion of the video conferencing will result in denial of justice.

Justice Rao: "Who are those who cannot come?"

Justice Gavai: Have you collected any data that in past 1.5 years how many such persons have approached this court?

Justice Rao: "There is no person in remote area who is denied access to physical court. Nobody from remote area wants to come to Delhi to Supreme Court…You know the percentage of cases which start in lower court and reach here."

Further, he added, "Lower courts cater to the needs of the public and they have the facility to go to those courts".

" We have tried to manage situation of one lawyer arguing in court and one arguing from their office……There are problems not only from our side but also from the lawyer's end like low bandwidth, etc."

In jest, Justice Rao expressed: "We are all missing you so much! Looking at screens is not giving us any happiness….When Mr. Manoj Swarup is here in court and looking into our eyes the arguments are more effective than us looking into the screen."

Further, Justice Rao expressed the quandry the Court was in regarding the question of how to proceed with physical hearing after normalcy returns.

"Normalcy has to return, court have to function. In exceptional cases you make virtual hearing available. How will you lay down those norms?...Make your suggestions": the judge added.

"If we allow your prayers, it would be 'death knell' for Physical Courts", Justice Rao said.

The Bench allowed Senior Advocate to return after 4 weeks along with suggestions on how to lay down norms for virtual hearings in exceptional cases. The bench has tagged this petition along with an earlier petition(filed by All India Association of Jurists) seeking similar relief. On that petition, the Supreme Court had issued notice to the Bar Council of India and Supreme Court Bar Association to hear their views. While hearing that petition, Senior Advocate Vikas Singh, the President of the SCBA, said that the stand of the SCBA was that there should be complete physical hearings.

Case Title : National Federation of Societies for Faster Justice and others versus High Court of Uttarakhand and others|WP(c) No,1051/2021
Click Here To Read/ Download Order