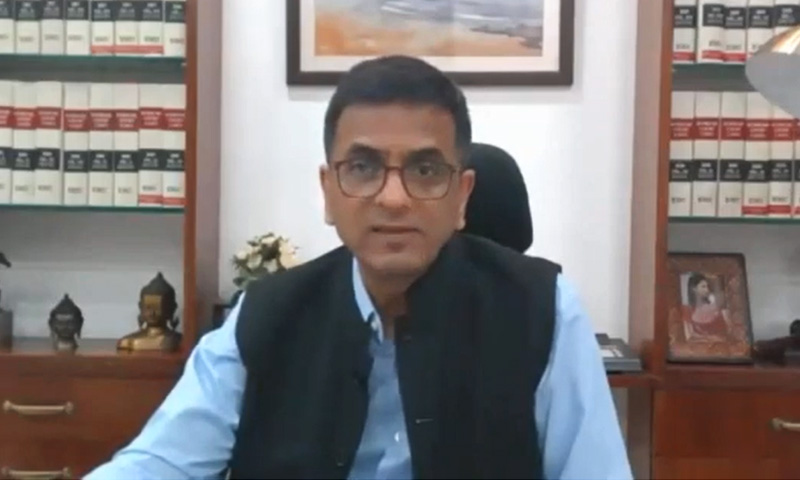 Emphasising that technology is a great enabler in enhancing access to justice, Supreme Court judge Justice DY Chandradhud has said that virtual hearings have allowed women lawyers, especially new mothers to argue from the safety of their homes ,who were often unfairly forced to take a step back in their careers due to gendered demands. Speaking at the Justice PM Mukhi Memorial Lecture...

Emphasising that technology is a great enabler in enhancing access to justice, Supreme Court judge Justice DY Chandradhud has said that virtual hearings have allowed women lawyers, especially new mothers to argue from the safety of their homes ,who were often unfairly forced to take a step back in their careers due to gendered demands.

Speaking at the Justice PM Mukhi Memorial Lecture on Saturday on the topic "Reconciling Rights and Innovation: Examining the Relationship Between Law and Technology", Justice Chandrachud remarked,

"I truly believe that the silver lining of the COVID-19 pandemic has been the nudge faced by judges and lawyers, to adapt to technology in their work in the legal ecosystem. During the virtual hearings, I have personally observed several lawyers, and evidently new mothers, arguing from the safety of their homes. This was a welcome change from the past, where women were unfairly forced to take a step back in their careers or steer away from barrister-practice altogether, owing to its harsh, and often gendered demands."

The judge further pointed out how a digital mode of e-filing and e-Courts have the potential to address several inequities in the system and have enabled access to justice for the disabled.

"A digital mode of e-filing and e-Courts also has the potential to address several of the inequities that are entrenched in the existing systems that hitherto served only the able-bodied. Technology is the great enabler in enhancing access to justice. On a personal note, I have taken this time to build on my technological skills and now exclusively rely on my laptop for all court-related matters", Justice Chandrachud said.

Opining how the COVID-19 pandemic has proved to be spectacular accelerant to the virtual and digital courts project in India, Justice Chandrachud remarked that it was essential to ensure that the closing of the precincts of the highest constitutional court of the country did not mean that the doors to access justice were closed.

"Once the lockdown was imposed in 2020, the Supreme Court of India started conducting virtual hearings from the 23rd of March. In the beginning, we had to mitigate the technological barriers that litigants faced in accessing justice. At the same time, there was a fear that the pandemic would increase the backlog. Thus, the immediate challenge at hand was to create a robust technology-enabled system that could effectively deal with fresh litigation and concurrently, prioritize pending cases. Crucially, we had to ensure that the closing of the precincts of the highest constitutional court of the country did not mean that the doors to access justice were closed. We had to perform our duty to protect civil liberties, attend to cases of public importance and be available as the court of last resort. Slowly, the virtual court systems were also adopted by all courts across India", he underscored.

He further pointed out that several courts including many district courts with little to no infrastructure or experience with virtual systems had embraced virtual hearings during the pandemic and are now making a transition to permanent avenues of hybrid hearing models.

The judge however highlighted that the Covid-19 pandemic has also exposed the digital divide that exists in the country. He remarked that although technology can tremendously empower, our institutions are not designed to enable such empowerment yet.

"The widespread shift to virtual platforms exposed the deep fissures in our society on access to the internet. It showed us that not everyone can afford to work or study from home, when high-speed internet, gadgets and electricity are not publicly guaranteed utilities", Justice Chandrachud said.

Canvassing the projects undertaken by the Supreme Court E-Committee to reduce the existing digital divide, Justice Chandrachud, who also serves as the Chairman of the E-Committee, said that service centres have been established that could consolidate all the essential facilities offered under the e-Courts project and make them available to litigants who lack digital access. These facilities include providing soft copies of judicial orders, facilitating e-filing of petitions, appending digital signatures, facilitating e-payments, and guiding people on availing free legal services from legal aid authorities.

Justice Chandrachud further highlighted that the E-Committee has ensure that online judicial processes protect the privacy of our litigants and provide data security. It was further pointed out that steps have been taken to make digital services accessible to persons with disabilities by adhering to the principle of reasonable accommodation.

The judge further enumerated upon the project undertaken to digitise over thirty-one billion court records across India. Opining that such digitization of Court records will expedite the justice delivery system, Justice Chandrachud said,

"Presently, we have launched this digitization project in five High Courts as a pilot. The standardization of digitization across the country will ensure interoperability between data repositories, and is bound to make our justice delivery system more seamless and efficient. Digitization of court records will also expedite the dispute resolution process and particularly, it will advance the objective of efficient enforcement of contracts as sought to be achieved by our commercial courts. This will also improve the ease of doing business in India, in terms of the guidelines issued by the World Bank."

He added that a welcome by-product of the transition to a virtual ecosystem was the increase in public access to our judicial systems. Opining that live-streaming of Court proceedings in various High Courts have demystified judicial processes, Justice Chandrachud remarked further,

"Livestreaming was introduced in High Courts based on the model rules framed by the E-Committee. The High Courts of Gujarat, Karnataka, and Orissa have begun livestreaming court proceedings in the Chief Justice's Court. This was an attempt to demystify judicial processes, increase judicial accountability and disseminate information in cases of public importance."

Highlighting the progress made by the e-Courts project in the past year in creating a system that was conducive for virtual courts, electronic filings and online payments, Justice Chandrachud said,

"First, 3.54 billion electronic transactions were undertaken under the e-Courts project, which highlights the sheer reach of e-Courts' services to the common citizens. Second, a total of 19.6 million cases were heard by courts through video conferencing. Third, out of the thirteen million cases registered, 8.3 million cases were disposed of, thus, achieving a disposal rate of over 60 per cent. Finally, in our endeavour to promote paperless filing, we also developed an e-filing software, using which over one hundred thousand cases have been filed online in over seventeen thousand district Courts and 25 different High Courts."

Justice Chandrachud also underscored that a crucial lesson that the transition to virtual courts has taught him is that digital reform should not be limited to merely automating our old ways of working and transposing the old physical infrastructures to a virtual environment.

It may be noted that the Supreme Court has commenced full physical hearings from April 4. "Monday onwards opening we are opening full physically. Monday and Friday we'll provide advocates virtual hearing if they ask", CJI Ramana had made an announcement to this effect on March 30.