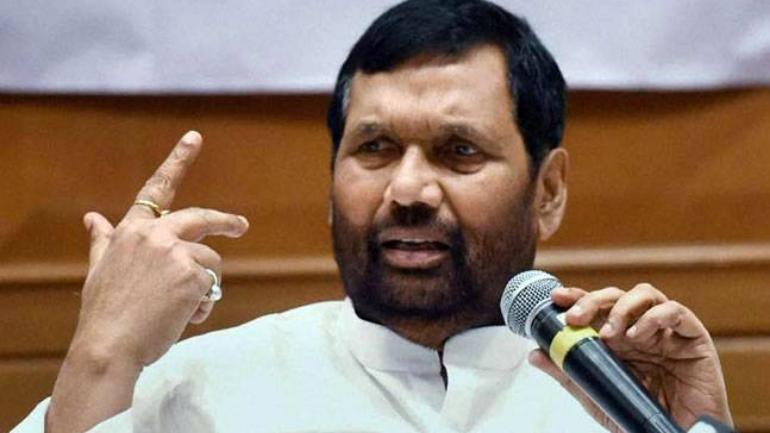 Water sample collected from the official residence of Union Food and Civil Supplies Minister Ram Vilas Paswan has failed Bureau of Indian Standard (BIS) quality norms, the Supreme Court was informed on Friday.The top court was informed that 11 samples collected from different parts of Delhi have failed the quality test on various counts out of 47 parameters.The apex court ordered a...

The top court was informed that 11 samples collected from different parts of Delhi have failed the quality test on various counts out of 47 parameters.

The apex court ordered a joint inspection of drinking water in Delhi by a team of Central Pollution Control Board (CPCB), Bureau of Indian Standard (BIS) and Delhi Jal Board (DJB) officials saying it is not the time to play blame game.

The court also asked BIS to suggest measures to improve water quality in the national capital like changing pipelines.

It asked the national standards body to file a report on water quality in other cities with a finding whether it is potable or non-potable.

The top court also expressed concerns over water mafia prevailing in the city and indicated drinking water supply is being disrupted to facilitate water tanker mafia.

A bench of justices Arun Mishra and Deepak Gupta was told by advocate Vipin Nair, appearing for BIS that 11 samples were collected from different places in the national capital, which do not conform with the 47 parameters of the Bureau.

Nair submitted the report to the apex court, which showed that sample collected from Paswan's official 12 Janpath residence did not conform to odour, aluminium and coliform levels of the BIS.

Nair said that most of the samples are contaminated with Coliform which occurs when faecal matter gets mixed with treated water which is supplied to end use consumers.

In the first phase, the samples of drinking water were drawn from various locations across Delhi and 20 other capital cities of states. The samples were drawn from different locations from piped water being supplied by city municipality /corporation/ water board and local bodies at consumer's end and sent for testing to the designated labs through couriers, the BIS report said.

It added that the samples were sent for testing as per IS 10500:2012 (specification for drinking water) at National Accreditation Board accredited labs.

"Samples were sent for testing against 47 out of 48 parameters (excluding radiological test). These covered organoleptic and physical test, chemical tests, toxic substance, bacteriological, virological and biological tests," the report said.

In its finding, the BIS report added, "It was found that all the drinking water samples drawn from Delhi were non-conforming in one or more requirements as per IS 10500: 2012 (specification of drinking water).

The top court had on November 25, last year had issued notices to all states seeking various details, including on air quality index (AQI), managing air quality and disposing of garbage.

It had taken suo motu (on its own) cognisance of the controversy regarding supply of alleged unsafe drinking water in the national capital and said it is the duty of the state to provide drinkable water to the citizens.

The bench had also criticised the Centre and Delhi government for "politicising" the issue of water pollution and said they cannot indulge in this "blame game" as people would suffer.

The bench said that six cities, out of which three are in Uttar Pradesh, are more polluted than Delhi and issues like air quality, safe drinking water and garbage disposal was virtually affecting every part of the country.