"We Are Also Concerned With The Tendency Of Police Commissioners Giving Interviews":SC In Republic Vs Mumbai Police TRP Case 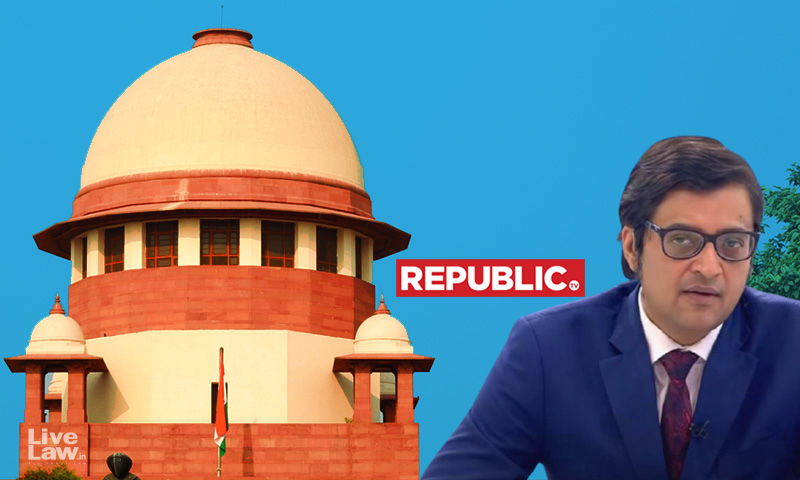 The Supreme Court on Thursday allowed Republic TV and its editor-in-chief Arnab Goswami to approach the Bombay High Court for quashing of a FIR registered by Mumbai Police for manipulating their Television Rating Points, or TRP."Your client has an office at Worli (in Mumbai)? Between Flora Fountain and the bridge, it would be better if you move the high Court either under 226 or 482...

The Supreme Court on Thursday allowed Republic TV and its editor-in-chief Arnab Goswami to approach the Bombay High Court for quashing of a FIR registered by Mumbai Police for manipulating their Television Rating Points, or TRP.

"Your client has an office at Worli (in Mumbai)? Between Flora Fountain and the bridge, it would be better if you move the high Court either under 226 or 482 (CrPC)", expressed Justice D. Y. Chandrachud at the outset.
"We can go under 226...Normally, in a 19(1)(a) scenario...(cutting off)", began Senior Advocate Harish Salve for the petitioner.
"We are also concerned about the fact that of late there has been a tendency of the Commissioners of Police to start giving interviews", observed Justice Chandrachud.
"Please take a look at the interview and the FIR- how can an investigation be proceeded with?...I was hoping to rely on Your Lordships' observation in Romila Thapar, where I had appeared for the state and tried to defend...", advanced Mr. Salve.
"We are asking you to go to the HC because the scope of 226 is wider than 32", noted Justice Indu Malhotra.
"Also, the HC is seized of the matter. Entertaining the petition here without the intervention of the HC sends a message to the HC. We should faith in the HC...it has been operating throughout the pandemic situation", said Justice Chandrachud.
Accordingly, "like any other citizen facing the predicament of an investigation under the Cr.P.C.", the bench allowed the plea to be withdrawn and the petitioner to able to approach the High Court.
The Mumbai Police last week claimed to have busted a racket that involved private television channels manipulating their Television Rating Points, or TRP.

The Detection Crime Branch of Mumbai police, which unearthed the TRP racket, has arrested owners of two Marathi channels, for manipulating viewership ratings, the official said.

Mumbai Police Commissioner Param Bir Singh told reporters an FIR has been registered at Kandivali Police Station for offences of criminal breach of trust (Section 409), cheating (420) and criminal conspiracy (120B) under the Indian Penal Code.

"Commissioner made false allegations against Republic TV because we have questioned him in the Sushant Singh Rajput case investigation. Republic TV will file a criminal defamation case against Mumbai police commissioner Param Bir Singh.

This kind of targeting only strengthens the resolve of everyone at Republic TV to push for the truth even harder", said Mr. Goswami.