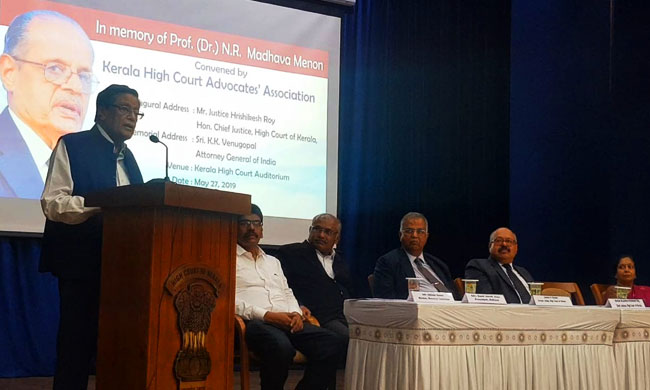 "We have lost a giant in the field of legal education and I have personally lost a friend", remarked Attorney General K K Venugopal while speaking at the event held by Kerala High Court Advocates Association in memory of Dr N R Madhava Menon.

The AG said that with the establishment of National Law Schools and the introduction of a modern curriculum, Dr Menon revolutionized legal education, making law a preferred option of brilliant students, in a major shift from the earlier days when it used to be the last resort of students who could not secure admission in other courses.

"He is rightly known as the Father of Indian Modern Legal Education", remarked the AG.

The AG added that he had a long lasting connection with Dr Menon, which included several collaborations such as the efforts to set up a National Law School in Kerala, and also the recently set up M K Nambiar Academy for Continuing Legal Education, of which Dr Menon was the Director.

Dr Menon spent day and night making the institutions he built a success, the Attorney General recounted. "Now he has left us orphaned. It is tough to find another man like him, even if you travel the length and breadth of the whole world", said Venugopal.

The event held at the High Court auditorium was inaugurated by Chief Justice Hrishikesh Roy, who reminisced his memories as a student of Dr.Menon at the Campus Law Centre, Delhi University.

Senior Advocate R Basant paid his homage to Dr Menon by highlighting different dimensions of his personality. Dr. Menon was a guru, a visionary, an institution-builder and a conscience keeper of the legal system, who was brave and bold enough to show the mirror to the system when it fell short of standards, said Sr Adv Basant. He added that Dr. Menon had a yearning for excellence, which distinguished him from the rest.

Prof (Dr) Saroja Bhaskar, former Principal of the Government Law College Ernakulam, a student of Dr. Menon, delivered the vote of thanks.